At the Prairie Island Nuclear Power Station:
“FITNESS FOR DUTY – PROHIBITIED ITEM IN THE PROTECTED AREA

“On 3/31/2016 at approximately 0342 CDT, a worker within the Protected Area self-reported a can of beer had been packed in the worker’s lunchbox. The worker reported after opening the can and taking a sip it was discovered to be a beer. This event is reportable under 10 CFR 26.719(b)(1).

“The worker notified Security who immediately escorted the worker from the Protected Area and disposed of the beer. The worker is not an Operator or a Supervisor. The investigation of this event is in progress.

“The public health and safety are not impacted.

“The NRC Resident Inspector was notified.” 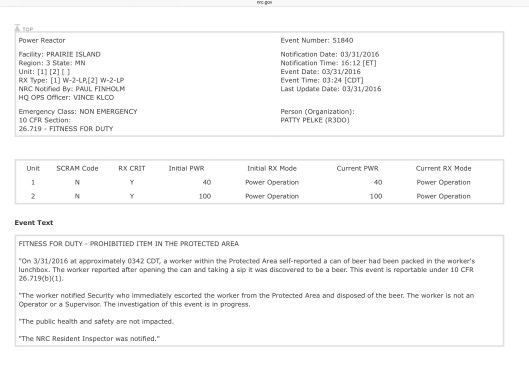 http://www.nrc.gov/reading-rm/doc-collections/event-status/event/2016/20160401en.html
(Note that there are a couple of important degraded conditions at nuclear reactors listed at the above link (e.g. Davis Besse). The event is said to have occurred on the 31st even though it was posted on the 1st. The only unusual thing about this is the supposed self-reporting and that the worker alleges he didn’t know what he was drinking. Thus, it doesn’t appear to be an April Fool’s joke. Obama’s “nuclear security” summit was a sufficiently bad joke for the entire government.) 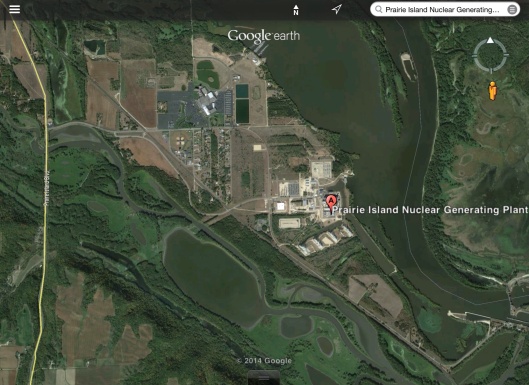 Drinking can photo by Marcos André via Wikimedia-Flickr, CC-BY-2.0