There is such a thing as too late. The world stands at the precipice of too late. Spain would have until mid August 2017 to address failings in the cooling system of Almaraz nuclear power station, with the loophole of “reasonably practical” and claims that it is safe, anyway. While this appears prompt compared to the US NRC, which has given US nuclear power stations from 2012 to 2019 to repair serious electrical defects, it may not be prompt enough. Notice that the question, below, was raised by someone in neighboring Portugal. There can be very serious transboundary impacts. Belarus was, and remains, more badly hit than the Ukraine by the Chernobyl nuclear accident. Authoritarian States may be required in these countries to keep a lid on knowledge of health impacts and the concomitant dissent:
“Belarus, Ukraine and Russia were the most highly contaminated countries. About 5 million people still live in areas with very high levels of radioactive contamination (Cs-137 >40 kBq/m2) in Belarus (18,000 km2), Ukraine (12,000 km2) and Russia (16,000 km2). 400 million people live in areas con-taminated with lower levels of radioactivity (4 – 40 kBq/m2). 42 % of Europe’s land area was contaminated./ Western Europe (defined as all European countries excluding Belarus, Ukraine and Russia) received 37 % of Chernobyl’s fallout accounting for about 40 % of Chernobyl’s collective dose to the northern hemisphere.” From ” TORCH 2016” by Ian Fairlie: https://www.global2000.at/sites/global/files/TORCH%20-%20The%20other%20Report%20of%20Chernobyl.pdf 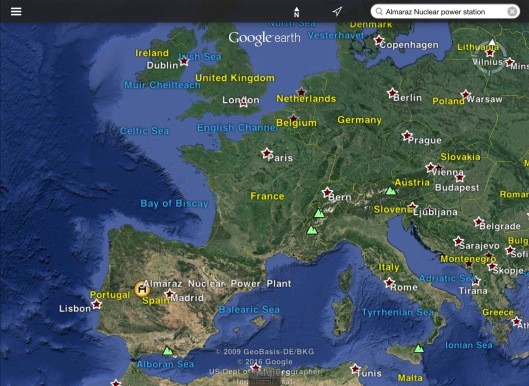 On 28 January 2016, five inspectors from the Spanish Nuclear Safety Council (CSN) reported serious failings in the water pump engines at the Almaraz nuclear power plant. These failings raise doubts about the operability of the cooling system and pose a serious risk to local people and to the environment in Spain and Portugal.

Almaraz has repeatedly made headlines owing to its poor safety conditions, and was even described by Greenpeace as an ‘extreme case’ in its study on the application of minimum safety standards introduced in Europe after the Fukushima accident.

“Parliamentary questions
23 March 2016
E-001118/2016
Answer given by Mr Arias Cañete on behalf of the Commission
1. The amended Nuclear Safety Directive(1) sets out a nuclear safety objective for nuclear installations, and has to be transposed by 15 August 2017. Member States shall use that objective as a reference for the timely implementation of reasonably practicable safety improvements to existing nuclear installations such as the one in Almaraz. The operator, under the control of the national regulator, is responsible for ensuring the nuclear safety of the Almaraz nuclear power plant in accordance with the requirements set out by the Nuclear Safety Directive. According to the information provided to the Commission, the national regulator has found that the Almaraz nuclear power plant is in a safe condition.
2. The Commission has not received any notification under Article 41 of the Euratom Treaty regarding the planned investment as it is described in the question.
(1)
Directive 2009/71/Euratom, as amended by Council Directive 2014/87/Euratom.
Last updated: 29 March 2016” http://www.europarl.europa.eu/sides/getDoc.do?type=WQ&reference=E-2016-002071&format=XML&language=EN (Emphasis our own.)

One is left thinking of Orwell’s “Homage to Catalonia” where the Spanish trains were usually late, but once in awhile the train came early, and if one arrived on time, one missed it. There is such a thing as too late.

Excepting the “reasonably practical” loophole and claims that it is safe, the Spaniards promise of Aug. 17, 2017 is more timely than this US promise for “Open Phase Electric Systems“, which it has been pretending to address since at least 2012: “Nuclear power plant operators are currently implementing the permanent solution for this issue and are expect to be done by Jan. 30, 2019“. http://www.nrc.gov/reactors/operating/ops-experience/open-phase-electric-systems.html Seven US NRC electrical engineers were so alarmed that they wrote a public petition in protest. But, the US NRC is ignoring their demand to repair the problem or shut the nuclear reactors down. These seven put their necks on the line, as citizens and whistle-blowers, but the NRC appears hell-bent to destroy America, and possibly the world, if another country doesn’t beat them to it. We are all sitting on a razor’s edge and most just go about their silly business. Even telling your friends and family about these crimes might lead to a change for you may know someone who knows someone who could make a difference, even if you can’t.