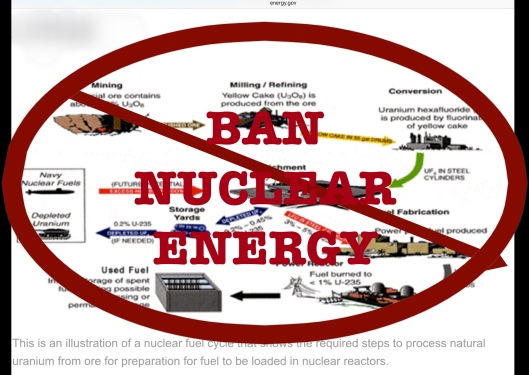 With the Exception of Bernie Sanders, major US Presidential candidates are neither leaders nor followers of public opinion on nuclear power. Americans oppose nuclear power. Meanwhile, President Obama is importing foreign nuclear waste, even as within the US, states don’t want the nuclear waste of other states (e.g. Idaho and Illinois)! See more info on how to oppose the import of 200 tonnes of German nuclear waste after the article.
From CommonDreams.org:
“Published on Friday, March 18, 2016
In First, Majority of Americans Now Oppose Nuclear Energy
Gallup poll comes as new campaign counters nuclear’s “clean energy myth”
by Andrea Germanos, staff writer
“For the first time since Gallup began polling on the question, a majority of Americans say they oppose nuclear energy.

It marks the first time a majority in the country has felt this way about nuclear energy providing electricity since Gallup began asking the question in 1994.

Forty-four percent said they are still in support of it.

Even in 2012, the first time Gallup asked the question after the Fukushima disaster, 57 percent of Americans were still in favor of nuclear energy… Gallups conducted the new poll of 1,019 adults nationwide from March 2 to 6, 2016, It has 4 percent margin of error.

The poll comes a week after the five-year anniversary of the Fukushima nuclear disaster, when said Cindy Folkers, radiation and health specialist at the advocacy organization Beyond Nuclear warned, “Not only is there no Plan B for what to do if and when a Fukushima-style disaster happens in the U.S., there is no Plan A to prevent one either.”

And this week, the Nuclear Information and Resource Service (NIRS) launched their #NuclearIsDirty campaign, which aims to counter the myth of nuclear power as “clean.”

Explaining the need for the campaign, NIRS Executive Director Tim Judson wrote Tuesday:
You can’t build a “bridge” to clean energy on top of radioactive waste. Nuclear power is too expensive and too slow to solve the climate crisis, but it is also too dirty and too dangerous to justify. If countries choose nuclear as a climate solution, they are also choosing to target communities for everything that goes along with it: uranium mining and milling, radioactive discharges and leaks, radioactive waste … and of course, nuclear disasters. All of this adds up to mountains of long-lived and poisonous waste, leaching into groundwater; spilling into rivers, lakes and oceans; venting into the air; contaminating the land; and being ingested by humans, animals, and plants alike. That is the real story of nuclear power. And it has to be told.” CC-BY-SA-3.0 (Emphasis added). http://www.commondreams.org/news/2016/03/18/first-majority-americans-now-oppose-nuclear-energy Nuclear Power emits greenhouse gases and greenhouse gas precursers throughout the fuel chain. Mining and transport create regular greenhouse gases; operating nuclear reactors and waste discharge radioactive greenhouse gases and precursors – they discharge radioactive carbon and krypton.

The original deadline for opposing the import of 200 tonnes of German nuclear waste to America was March 11th. Now they have changed it to this Friday, which is Good Friday for non-Orthodox Christians. So, they changed it from the 5 years anniversary of Fukushima to the day of Jesus’ crucifixion. Tacit threat or warning?

The US DOE has unofficially (not published in Federal Register) extended the German waste dumping on America comment deadline. To be anonymous you will have to send a disposable email, or send it by post with no return address. People should have the right to “vote” anonymously, either on the Federal Register web site, or on an election day ballot.
“Comments may be submitted by email to GermanSpentNuclearFuelEA@leidos.com. Direct written comments on the Draft Spent Nuclear Fuel from Germany EA to Tracy Williams, NEPA Compliance Officer, U.S. Department of Energy, P.O. Box B, Aiken, South Carolina 29802. DOE has extended the public comment period in response to several requests. The public comment period now ends March 25, 2016. DOE will consider all comments received via email by 11:59PM Eastern Standard Time or postmarked by that date. Comments submitted after that date and time will be considered to the extent practicable.” http://energy.gov/nepa/ea-1977-acceptance-and-disposition-spent-nuclear-fuel-containing-us-origin-highly-enriched The following article had some good ideas-points. They recommended contacting governmental reps and wondered if the Presidential candidates are aware: http://www.examiner.com/article/radioactive-waste-shipment-to-srs-public-comment-period-extended