Introduction-Background
Anyone who was a serious student of biological sciences is immediately alarmed to learn that nuclear reactors routinely emit radioactive carbon (14C) and radioactive hydrogen (tritium) into the environment. Carbon and hydrogen are the very foundations of life. And, most of the human body is comprised of water (H2O). Tritium makes tritiated water. Radioactive carbon (14C) has a half-life of over five thousand years (5,730 years). Even tritium, with a half-life of 12 years, will be in the environment for almost 200 years.

“Carbon forms the key component for all known life on Earth. Complex molecules are made up of carbon bonded with other elements, especially oxygen, hydrogen and nitrogen, and carbon is able to bond with all of these because of its four valence electrons.” https://en.wikipedia.org/wiki/Carbon-based_life

“Carbon-14 is formed in the fuel (UO2), in core structural materials, and in the cooling water of LWRs” [Light Water Reactors]…”The radioactive nuclide 14C is, and will be, formed in all nuclear reactors due to absorption of neutrons by carbon, nitrogen, or oxygen. These may be present as components of the fuel, moderator, or structural hardware, or they may be present as impurities. Most of the 14C formed in the fuels or in the graphite of HTGRs [High Temperature Gas Reactors] will be converted to a gaseous form at the fuel reprocessing plant, primarily as carbon dioxide; this will be released to the environment unless special equipment is installed to collect it and convert it to a solid for essentially permanent storage. If the 14C is released as carbon dioxide or in any other chemical form, it will enter the biosphere, be inhaled or ingested as food by nearly all living organisms including man, and will thus contribute to the radiation burden of these organisms… Large amounts of 14C have also been formed in the atmosphere as a result of nuclear weapons explosions.” CARBON-14 PRODUCTION IN NUCLEAR REACTORS, By Wallace Davis, Jr. https://www.osti.gov/servlets/purl/7114972
Thus, radioactive carbon (14C) is discharged during routine operations of the common boiling water (BWR) and pressurized reactors(PWR), and during fuel “reprocessing”. [Clearly nuclear is not “carbon free”. It forms CO2 and Methane (CH4). It produces “hot”, radioactive, greenhouse gases.]

“Accumulation of Sellafield-derived radiocarbon (14C) in Irish Sea and West of Scotland intertidal shells and sediments“, Journal of Environmental Radioactivity, January 2016, Vol.151:321–327, doi:10.1016/j.jenvrad.2015.10.029, By Kieran M. Tierney et. al.
“Abstract
The nuclear energy industry produces radioactive waste at various stages of the fuel cycle. In the United Kingdom, spent fuel is reprocessed at the Sellafield facility in Cumbria on the North West coast of England. Waste generated at the site comprises a wide range of radionuclides including radiocarbon (14C) which is disposed of in various forms including highly soluble inorganic carbon within the low level liquid radioactive effluent, via pipelines into the Irish Sea. This 14C is rapidly incorporated into the dissolved inorganic carbon (DIC) reservoir and marine calcifying organisms, e.g. molluscs, readily utilise DIC for shell formation. This study investigated a number of sites located in Irish Sea and West of Scotland intertidal zones. Results indicate 14C enrichment above ambient background levels in shell material at least as far as Port Appin, 265 km north of Sellafield. Of the commonly found species (blue mussel (Mytilus edulis), common cockle (Cerastoderma edule) and common periwinkle (Littorina littorea)), mussels were found to be the most highly enriched in 14C due to the surface environment they inhabit and their feeding behaviour. Whole mussel shell activities appear to have been decreasing in response to reduced discharge activities since the early 2000s but in contrast, there is evidence of continuing enrichment of the carbonate sediment component due to in-situ shell erosion, as well as indications of particle transport of fine 14C-enriched material close to Sellafield.” http://www.sciencedirect.com/science/article/pii/S0265931X15301454 (Emphasis added; full article below). 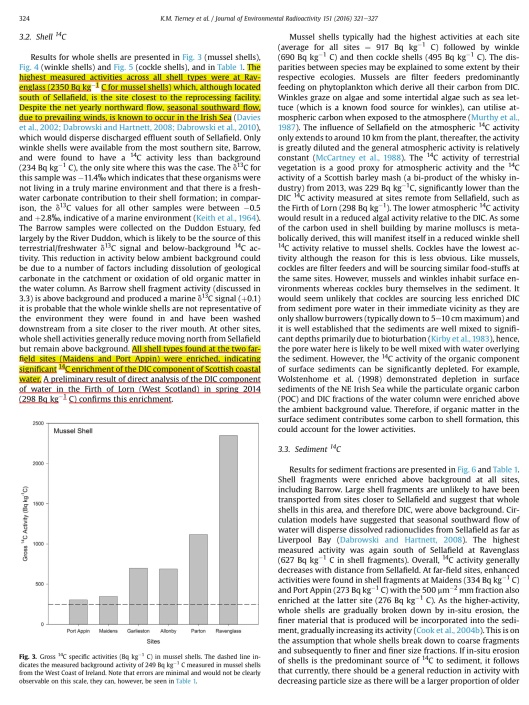 Note that in conclusions they state that “Consequently, the 14C activity of the inorganic carbon component of intertidal and sub-tidal NE Irish Sea sediments will gradually increase.“

“In Dublin’s fair city,
Where the girls are so pretty,
I first set my eyes on sweet Molly Malone,
As she wheeled her wheel-barrow,
Through streets broad and narrow,
Crying, “Cockles and mussels, alive, alive, oh!”
https://en.wikipedia.org/wiki/Molly_Malone

NB: Anyone who reads about radioactive carbon and radioactive hydrogen going into the environment and is NOT alarmed; if the radiological repercussions on plants and animals do not frighten them, then they were emphatically NOT good or serious students of biological sciences whatever grade they received. And, certainly they did not learn organic chemistry. Alarm is an instinctive reaction even decades later, for anyone who was truly a serious student. The alarm is because the radionuclides will be incorporated into the body itself. Carbon is the foundation of life. Biology is the study of life.