According to KEPCO, at Takahama Unit 4 PWR (pressurized water reactor) in Japan an alarm indicating “caution on the primary system floor drain” went off at 15:42 on February 20, 2016. The operator conducted a field inspection and found a radioactive puddle on the floor in front of the condensate demineralizer (filtering system which uses resins to eliminate impurities from the reactor coolant) in the reactor auxiliary building. Leaked radioactive water was also collected by the auxiliary building sump and other components. The total leakage was an estimated 34 liters with a total amount of radioactivity of 60,000 Becquerels (Radioactive disintegrations or shots per second.) This would be 1,764 Bq per liter. (See original English KEPCO press release at bottom).

What caused the leak? Valve Problems, of course

Anyone who is of a certain age, or has a house of a certain age, knows that valves tend to leak. The effects of routine wear, corrosion, and age are worsened by the ionizing radiation at nuclear reactors. Neutron bombardment at nuclear reactors is a major destructive aspect, which tends to be forgotten. Coolant system failures can lead to nuclear meltdowns very quickly.

Based on Google Translate of KEPCO Press Release regarding Takahama Radioactive water leak, in conjunction with other knowledge-research we find the reported cause:

Field Survey results: Water drops were observed in the area of the B-inlet side and the outlet side of the valve of the coolant demineralizer. Two valves were pressure tested and leakage was found between the valve casing and the diaphragm sheet. The leakage point was determined to be the inlet side of the valve of B-coolant demineralizer. It was confirmed that there was no deterioration in the diaphragm sheet [though it sounds like this was in the 2009 overhaul. One hopes they checked it again!] The bolts were apparently not evenly tightened.

Either the diaphragm rubber was indeed deteriorated, or they decided to make sure, because one countermeasure is listed as replacement of the diaphragm sheet of the valve with a new one. Workers are also to make sure that the valve is properly tightened, and select the proper tool for the location and reflect upon the valve work procedure manual [duh!]. They discuss technical means of reducing the influence of pressure variation, as well. See Japanese Press Release from Feb. 22, 2016 here: http://www.kepco.co.jp/corporate/pr/2016/0222_1j.html (There will probably be an English Press Release tomorrow). Web site is here: http://www.kepco.co.jp 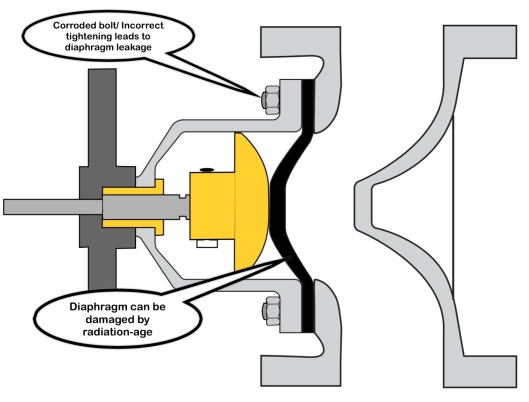 Muskid, CC-BY-SA via Wikipedia, with labels added. The original is here: https://en.wikipedia.org/wiki/Diaphragm_valve#/media/File:Membranventil.svg
Compare to KEPCO diagram of Valve Failure (The English word “bolt” was added to facilitate comparison.) 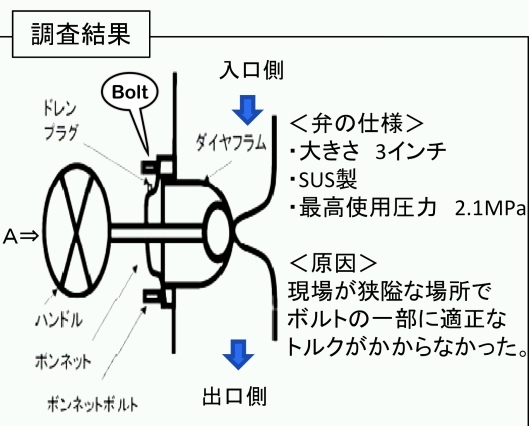 Not only does radiation speeds up corrosion and degradation of materials, but all, or almost all, operating nuclear reactors are old. If they were cars you wouldn’t want to drive them on the highway. They are going to run MOX plutonium fuel in this reactor, too.

Why was the Water Radioactive?

The Condensate and Demineralized Makeup Water System stores and distributes reactor quality water for the main steam cycle and for numerous auxiliary systems. It also maintains a minimum of 150,000 gallons for the Reactor Core Isolation Cooling and High Pressure Coolant Injection systems.

What is a valve?

“A valve is a device that regulates, directs or controls the flow of a fluid (gases, liquids, fluidized solids, or slurries) by opening, closing, or partially obstructing various passageways. Valves are technically fittings, but are usually discussed as a separate category. In an open valve, fluid flows in a direction from higher pressure to lower pressure. The word is derived from the Latin valva, the moving part of a door, in turn from volvere, to turn, roll.” Read more here: https://en.wikipedia.org/wiki/Valve

What is a diaphragm valve?

“Diaphragm valves can be manual or automated. Their application is generally as shut-off valves in process systems within the industrial, food and beverage, pharmaceutical and biotechindustries. The older generation of these valves is not suited for regulating and controlling process flows, however newer developments in this area have successfully tackled this problem” Read more here: https://en.wikipedia.org/wiki/Diaphragm_valve

In another nuclear reactor context: “The deterioration of the diaphragms at WNP-2 and Pilgrim was much more severe than what has normally been observed at the end of service life for these diaphragms. This may indicate that the life expectancy of the diaphragms is less than the 7-year combined shelf and service life and the 3 to 4-year service life recommended by GENE. Although some diaphragms exhibited overall hardening, the diaphragms at both plants were found to be most severely hardened in areas that are normally in contact with system air (as opposed to areas that are in contact with metal valve surfaces). Any torsional or twisting force applied to the removed degraded diaphragms caused them to crack. According to the NSSS supplier, General Electric Nuclear Energy (GENE), a normal diaphragm at the end of service life tends to have only a slight loss of flexibility and is somewhat hardened all over, with no particular area harder than another.”
http://www.nrc.gov/reading-rm/doc-collections/gen-comm/info-notices/1994/in94071.html

Emphasis added. Original here: http://www.kepco.co.jp/english/corporate/pr/2016/__icsFiles/afieldfile/2016/02/21/2016_feb20_1.pdf
The leaky valve as described by KEPCO (if you go to the original pdf, and save it, you can cut and paste some of the information into Google Translate.)