NuGeneration Limited (NuGen) wants to build three nuclear reactors (Moorside) near Sellafield nuclear site in Cumbria UK. NuGen is a consortium of Japan’s Toshiba and France’s ENGIE (GDF-Suez). Like all nuclear reactors, they will legally discharge lethal radioactive materials into waterways. Although ocean dumping of nuclear waste is supposed to be illegal, offshore pipelines apparently remain a loophole. Radioactive discharges from the offshore pipeline(s) of Moorside would add to the already heavy radioactive burden of the Irish Sea and ultimately the Arctic. Not only Britain, but Ireland, Norway and those concerned with the Arctic should be alarmed. Additionally, cooling water intake pipes trap and kill marine life. Of current concern, borehole surveys for the intake and outfall pipes will disturb over half a century of radioactive sediment from nearby Sellafield’s discharges.

As explained by Marianne Birkby of Radiation Free Lakeland:
“NuGen plan to drill/blast 40 (ish) boreholes in the seabed off Sellafield. The boreholes are for geomapping surveying purposes …surveying the area in preparation for the proposed enormous direct cooling system and the outfall and intake pipes

When the Walney Wind Turbines some distance away were being discussed by Councillors there was concern because of the churning up of radioactively contaminated silts. The NuGen “test” boreholes are in an area directly in the path of decades of nuclear dumping. It seems that NuGen have the advantage of bypassing Cumbria County Councils planning regime and are able to cut straight to the chase. The Marine Management Organisation have to give formal consent.

The application for 40 boreholes is available to view on the public register of the Marine Management Organisation but is not easy to find. They suggest using the link attached below and the advanced search function. The reference is MLA/2015/00475: https://marinelicensing.marinemanagement.org.uk/mmofox5/fox/live/MMO_PUBLIC_REGISTER/search?area=6

NuGen say that the drilling by Furgo would cause no more churning up of radioactive sediment than storm surges in the Irish Sea. This is a disingenuous argument as storm surges are thought to have led to the increase in radioactive particles being washed up on Cumbrian beaches over the past few years. In your letter please ask if any environmental surveys have been carried out on the cumulative impact of increased storm surges and the drilling of 40 boreholes not far from the Sellafield discharge pipes.

Please also copy your letter to the leader of Cumbria County Council Stewart.Young@cumbria.gov.uk

And others who may have influence to stop this madness.

Fugro Borehole Drilling (300 on the land) Around 40 on the Irish Sea Bed just off Sellafield. http://www.allaboutshipping.co.uk/2015/12/16/fugro-to-commence-site-investigation-contract-work-for-nugen/” (Emphasis our own)
Learn More at Radiation Free Lakeland: https://mariannewildart.wordpress.com

Note: ENGIE is an apparent rebranding of GDF-Suez. GDF is Gas of France! Suez was formed to construct the Suez Canal.

Pre-existing nuclear waste is already a serious problem without churning it up even more: Plutonium 239+240 (Pu-239+240) “shows much evidence of the effect of remobilisation; concentrations in sea water near Sellafield have reduced much more slowly than discharges. At Southerness, ∼50 km away, there was no significant reduction in sea water concentrations from 1985 to 1996, and winkles showed an increase then decrease in concentrations over this period, consistent with a spreading of activity. This effect was replicated in mud at Garlieston, ∼70 km from Sellafield.For Am-241, the rate of grow-in from Pu-241 has dominated direct discharges since the late 1970s. Grow-in continues today in the Irish Sea at the rate of ∼8 TBq y(-1), ∼200 times the rate of direct discharge. Winkles at Southerness show evidence of a spreading effect of Am-241, with an increase then decrease from 1985 to 1996. At Garlieston there was an increase in concentrations in mud from 1985 to 1997, and at Carlingford in Northern Ireland the concentration of Am-241 in mud appears to be increasing still. This effect of the spread of activity away from Sellafield may continue, at least in the near future.” G.J. Hunt, K.S. Leonard* and L M. Hughes* (2013) “Artificial radionuclides in the Irish Sea from Sellafield: remobilisation revisited.” Journal of Radiological Protection 33 (2) p261-79
http://www.ncbi.nlm.nih.gov/pubmed/23482389 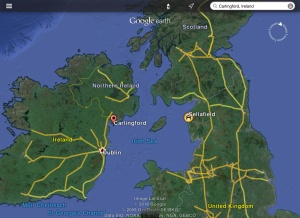 “Technetium-99 discharged from Sellafield has affected Norwegian waters. Technetium-99 has a very long half-life and accumulates in marine organisms, particularly in seaweed and shellfish. ” http://www.environment.no/Topics/Radiation/Radioactive-contamination/