What do you know! GE Hitachi has a Nuclear Fuel Facility Near Prince of Wales Elementary School in Peterborough Ontario. 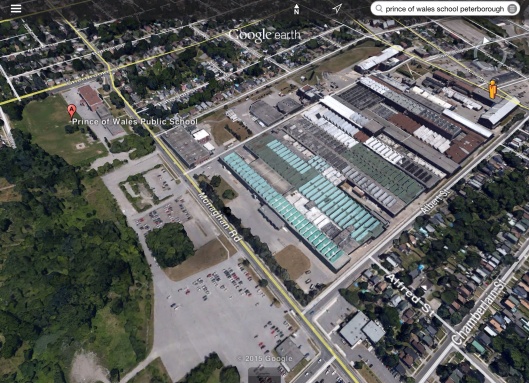 This is where Jay Cullen, prof. at U. Vict, BC, grew up! You know, the metals in plankton expert, who doesn’t seem to be testing for radionuclides in plankton. Did he miss that most radionuclides are metals? Cadmium and lead, which he has studied, are heavy metals, as are uranium and plutonium. Uranium eventually becomes lead. You know, Jay Cullen, the guy who seems to think that a man in a wheelchair venting his frustration about Fukushima constitutes a danger to himself. You know the guy who appears clueless about sampling, since he seems to think that a handful of water samples tells us something. That assumes that he’s even sampling the right thing. Then he gives himself airs about people who criticize him and accuses them of being scientific illiterates. You know the guy who no one had ever heard of anyway, and most of us wish we hadn’t. Jay Cullen needs to man up and drop the charges against a disabled man who has tried to do the research (for free) that Cullen doesn’t seem to be doing for $630,000. Where is that money going? $75,000 for a machine doesn’t account for the rest. Isn’t that what his mentor Buesseler (WHOI) said it cost? If he’s paying WHOI $600 per sample, it still doesn’t add up because there are so few samples.

Jay Cullen probably went to school at that elementary school. That might be why he thinks a little bit of radiation isn’t harmful. Maybe that’s why he sends school kids out to get Pacific water samples to check for radiation, though it would be interesting to know what his $630,000 is being spent on. If he’s using volunteers, and testing so few samples, where is the rest going?
http://www.thenorthernview.com/haidagwaii/283080881.html
https://ring.uvic.ca/news/uvic-oceanographer-leads-new-radioactivity-monitoring-network

He says he has no conflicts of interest, and he may feel that is so, but every rock we turn over about Jay Cullen pops up more nuclear ties. Conflict of interest has to do with if there is a POTENTIAL for influence peddling and unethical behavior, not if there is.

What is in Petersborough? Not just GE-Hitachi Fuel Facility. There is also Rolls Royce which makes the nuclear reactors for nuclear submarines. They are also involved in civilian nuclear. And Siemens who has been involved in the nuclear industry too: “operations from large multi-national companies such as Siemens, Rolls Royce, and General Electric, …“ That’s a lot of nuclear related companies for a population of a mere 78,698 https://en.wikipedia.org/wiki/Peterborough,_Ontario Do you think he might have some kinfolk or friends who work at these companies? In a town of less than 80,000? It’s hard to believe otherwise. There is a hospital there too and some commute elsewhere.

In that context, it’s kind of hard to believe this: “Area politicians revealed they were shocked that a nuclear processing plant has been in their midsts for more than five decades. “Like many of you in our community, I was really surprised, shocked. I didn’t know GE was here,” Davenport MP Andrew Cash admitted to the crowd of about 100.“(Bloor West Villager Nov. 16, 2012) http://www.wise-uranium.org/epcdn.html

Jay Cullen left this little town and set off to McGill University, in Montreal, home to “asbestos is good for you”: “published and unpublished studies funded by the Quebec Asbestos Mining Association (QAMA) and performed by researchers at McGill University” were examined and it is alleged that “QAMA-funded researchers manipulated data and used unsound sampling and analysis techniques to back up their contention that chrysotile was “essentially innocuous… These studies were used to promote the marketing and sales of asbestos, and have had a substantial effect on policy and occupational health litigation. Asbestos manufacturing companies and the Canadian government continue to use them to promote the use of asbestos in Europe and in developing countries.” Am. J. Ind. Med. 44:540-557, 2003. Read more here or at bottom of our post: http://www.ncbi.nlm.nih.gov/pubmed/14571518 Jay Cullen graduated from McGill ca 1995. Canada tried to send Haiti asbestos, after the 2010 earthquake, to keep its mines open. McGill cleared the researcher but of course they would! Here is the critique: http://www.mcgilldaily.com/2013/10/speakers-critique-mcgills-review-of-asbestos-research/

In this 2005 hearing, concerns were raised about the GE nuclear fuel facility flooding. It flooded 2 inches and there is uranium 18 inches from the floor. Also about exposure levels to workers and the public: “Licence production limits. GE is limited to producing 150 tonnes of uranium as pellets for the production of fuel bundles in any calendar month. In addition, GE will limit the storage of nuclear materials on site so that the boundary public walkways surrounding the fence line of the licensed areas are kept at background radiation levels.” http://www.nuclearsafety.gc.ca/eng/the-commission/pdf/2005-12-01-Trans-GE-Peterborough-Day2.pdf (Emphasis our own).

Articles discussing the nuclear facility being near the elementary school:
“Enriched Hypocrisy: Before criticizing Iran’s nuke program, Canada should look within” by MATTHEW DAVIDSON, APRIL 23, 2010 http://www.dominionpaper.ca/articles/3313

“WIN! GE can’t assemble low-enriched uranium fuel bundles in Peterborough“, 23 December 2010 http://canadians.org/fr/node/6738 (CANDU reactors don’t use enriched uranium, but they make more tritium, which is why high levels of tritium are allowed in the drinking water. So they still make CANDU fuel.

The GEH-C facility has been producing uranium dioxide (UO2) pellets for use in nuclear power plants since 1955.
[…]
Ontario Environment ministry finds ‘no evidence’ of soil contamination near GE-Hitachi Toronto nuclear fuel facility

The province has found “no evidence” of soil contamination near the GE-Hitachi uranium processing plant on Lansdowne Ave., says a report based on tests conducted in the face of public pressure this June…. Released Friday (Oct. 11), the report outlines the Ontario Environment Ministry’s analysis of 176 dirt samples from 24 sites around the facility. It was prepared at the behest of Toronto’s chief medical officer of health, Dr. David McKeown, as anti-nuclear activists and residents of the area near Lansdowne Ave. and Dupont St. raised concerns about the facility’s location./The province’s sample results, which showed uranium levels no higher than 1.83 parts per million (ppm), were all lower than the 1.9 to 2.1 ppm Lachapelle said you would typically find in soil anywhere in Ontario. “Those are the concentrations that we’re being exposed to just from natural uranium in the environment,” she said.” (Toronto Star Oct. 11, 2013)
[…]
Barbara Lachapelle, a Toronto environmental health officer who has reviewed the GE Hitachi data, says uranium levels are well below accepted standards. Samples from the community in 2011 showed uranium at 2.3 to 2.5 parts per million, a level that can normally occur in soil throughout Ontario, says Lachapelle. The accepted standard in soil around a residence or in a park is 23 parts per million. The highest levels, around 15 parts per million, were on GE Hitachi property, says Lachapelle, suggesting the uranium emitted by the plant’s stack during processing doesn’t go very far. (Torstar News Service June 2, 2013)

Protesters stop train over GE-Hitachi Toronto nuclear fuel plant
A group of anti-nuclear protesters affiliated with the Idle No More movement stopped a train in the Davenport area on Sunday (Feb. 3) after their demonstration against a nearby uranium facility migrated onto CP Rail tracks. The GE-Hitachi plant on Lansdowne St. near Dupont St. caused an uproar in November when the surrounding community learned the facility in their midst had been processing uranium dioxide powder into pellets since 1965. (Toronto Star Feb. 4, 2013)” http://www.wise-uranium.org/epcdn.html (Emphasis our own).

This is kind of confusing. Are there two uranium facilities in that town?
“Protesters call for closure of GE-Hitachi Toronto nuclear fuel plant
Following a march from the GE-Hitachi uranium plant at Lansdowne Avenue and Dupont Street, a capacity crowd of protesters filled the Davenport-Perth Neighbourhood Centre sanctuary. Facilitated by the Ontario Clean Air Alliance’s Angela Bischoff, the Nov. 15 meeting brought together a host of speakers. Area politicians revealed they were shocked that a nuclear processing plant has been in their midsts for more than five decades. “Like many of you in our community, I was really surprised, shocked. I didn’t know GE was here,” Davenport MP Andrew Cash admitted to the crowd of about 100. (Bloor West Villager Nov. 16, 2012)

Following a two day public hearing, the Canadian Nuclear Safety Commission (CNSC) announced on Dec. 22, 2010, its decision to renew the Nuclear Fuel Facility Operating Licence for the GE Hitachi Nuclear Energy Canada Incorporated (GEH-C) facilities in Toronto and Peterborough for a period of 10 years. The Commission has decided to issue a single licence for both facilities.

The possession and processing of low enriched uranium, as approved in the January 2010 amendment to the Peterborough license, is not allowed under the renewed licence“. http://www.wise-uranium.org/epcdn.html

About McGill asbestos research:
“Exposing the “myth” of ABC, “anything but chrysotile”: a critique of the Canadian asbestos mining industry and McGill University chrysotile studies, Am J Ind Med. 2003 Nov;44(5):540-57.
Egilman D1, Fehnel C, Bohme SR.
“Abstract
BACKGROUND:
Beginning in the 1930s, the Canadian asbestos industry created and advanced the idea that chrysotile asbestos is safer than asbestos of other fiber types.
METHODS:
We critically evaluate published and unpublished studies funded by the Quebec Asbestos Mining Association (QAMA) and performed by researchers at McGill University.
RESULTS:
QAMA-funded researchers put forth several myths purporting that Quebec-mined chrysotile was harmless, and contended that the contamination of chrysotile with oils, tremolite, or crocidolite was the source of occupational health risk. In addition, QAMA-funded researchers manipulated data and used unsound sampling and analysis techniques to back up their contention that chrysotile was “essentially innocuous.”
CONCLUSIONS:
These studies were used to promote the marketing and sales of asbestos, and have had a substantial effect on policy and occupational health litigation. Asbestos manufacturing companies and the Canadian government continue to use them to promote the use of asbestos in Europe and in developing countries. Am. J. Ind. Med. 44:540-557, 2003.” http://www.ncbi.nlm.nih.gov/pubmed/14571518