The 1/2 inch inner cask (MPC) is the only part of Holtec Spent Nuclear Fuel Dry Cask systems, which actually seals off the highly radioactive waste from the outside world. Thus, the standards used for the MPCs are of life and death importance.

The Certificate of Compliance, Appendix B, states “Because the MPC is not an ASME Code stamped vessel, none of the specifications, reports, certificates, or other general requirements specified by NCA are required… Additionally, the fabricator is not required to have an ASME-certified QA program. All important-to-safety activities are governed by the NRC-approved Holtec QA program.“ (Table 3-1) “Certificate of Compliance No. 1032 Amendment No. 0 Revision No. 1 Appendix B 3-3”

And, yet, for the proposed San Onofre Spent Nuclear Fuel System, Holtec owner Kris Singh indicated that the MPCs “Meets the most stringent ASME Code.“, but that’s not what the Certificate of Compliance (CoC) of compliance says.

On the one hand it says that they will be “governed” by ASME- apparently not the latest version of it – but then say they say “except” for sections V and IX . Then they have a whole Table (3-1) of “approved” alternatives to the ASME Code. Then they propose alternatives to the approved alternatives, if there is “hardship” or “unusual difficulty”, or at least that appears to be what it says – it seems muddled enough to give lawyers a field day. (See the relevant pages toward the bottom of this post.)

Thus, the MPCs will not be stamped as ASME approved, because they aren’t! Standards are not a mix and match, take what you want and leave what you don’t, affair. And, certainly this does not correspond to “the most stringent ASME code”. Perhaps he will follow the ASME code for San Onofre, perhaps not. But, it appears not.

Note that HI-STORM UMAX and FW both use the MPC 37 and 89: “The HI-STORM UMAX Canister Storage System is certified as described in the” UMAX” Final Safety Analysis Report (FSAR) supplemented by the information on the MPCs and transfer cask in the HI-STORM FW FSAR, and in the U. S. Nuclear Regulatory Commission’s (NRC) Safety Evaluation Report (SER) accompanying the Certificate of Compliance (CoC).” http://pbadupws.nrc.gov/docs/ML1412/ML14122A443.pdf The differences seem to be strictly about the external cover. However, the 1/2 inch MPC is the only thing which actually seals off the radioactive waste. The MPCs are supposed to be interchangeable between Holtec systems, so it seems obvious that they would all be the same.

And, shame on ASME for not making their standards publicly available for free. This makes the running of cons easier. Lack of accessibility to the ICRP poses the same problem, though the US NRC should be following the US government’s own National Academy of Sciences BEIR VII report, which is available for free online, was taxpayer funded, and offers slightly more protection.

There are probably similar things found in the section of the CoC on concrete, but we’ve no time to examine more. Nonetheless, the construction of the outer cover matters. Does it have a hoop stress function? Will this hold when the concrete degrades? Will it interact with, and damage, the inner MPC?

In the California presentation, Singh proposed a 5/8ths thick cask (MPC), whereas the USNRC has only approved the 1/2 inch variety, and has stated in writing that they know nothing of the 5/8ths inch thick MPC. For this reason, there are concerns that San Onofre may be sent the thinner variety. Saying that the casks will be 5/8ths inch thick, when this is not approved, appears false advertising and a possible bait and switch game.

Besides false advertising, why would such codes matter? Nuclear Reactor Pressure Vessels and these High Level Nuclear waste (“Spent Fuel”) dry casks are essentially boilers, but very dangerous ones at that. When these radioactive boilers explode, deadly radioactive materials are released, and landscapes poisoned for essentially an eternity.

“ASME was founded in 1880 by Alexander Lyman Holley, Henry Rossiter Worthington, John Edison Sweet and Matthias N. Forney in response to numerous steam boiler pressure vessel failures.” https://en.wikipedia.org/wiki/ASME
“The principal causes of explosions, in fact the only causes, are deficiency of strength in the shell or other parts of the boilers, over-pressure and over-heating. Deficiency of strength in steam boilers may be due to original defects, bad workmanship, deterioration from use or mismanagement.” https://en.wikipedia.org/wiki/Boiler_explosion

This is not a mix and match wardrobe, or take your pick menu, as Holtec and the NRC seem to be making it. This is a most potentially deadly game that the NRC and Holtec are playing. And, take note, Holtec is popping up all over the world with these thin spent fuel casks, of questionable standards, and has reportedly used the fact that it is US approved to get a leg up on the competition. Holtec Casks are already located in the US, in Europe (proposed or existing), and are proposed at Chernobyl in the Ukraine. Holtec’s Kris Singh is probably the most dangerous man alive besides Vladimir Putin, certainly one of the most dangerous. (Putin controls Russian State owned nuclear giant Rosatom). 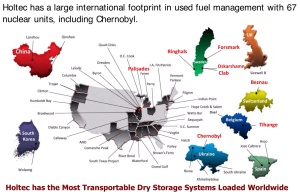 Worth recalling – https://miningawareness.wordpress.com/2015/02/05/why-was-holtec-debarred-as-tva-contractor/ Anyone who has been involved in bribery or kickbacks, in the past, should never be trusted again.

Less than 5 Months Ago:
“Amendment 1 Revision 1
Amendment No. 1 of CoC 1032 for the HI-STORM FW System”
https://miningawareness.wordpress.com/2015/06/03/us-nrc-approves-holtec-certificate-of-non-compliance-with-scientific-method-asme/ https://www.federalregister.gov/articles/2015/06/01/2015-13081/list-of-approved-spent-fuel-storage-casks-holtec-hi-storm-floodwind-system-certificate-of-compliance

Several Pages of the Certificate of Compliance (CoC) to be Commented on by tonight, relevant to ASME. 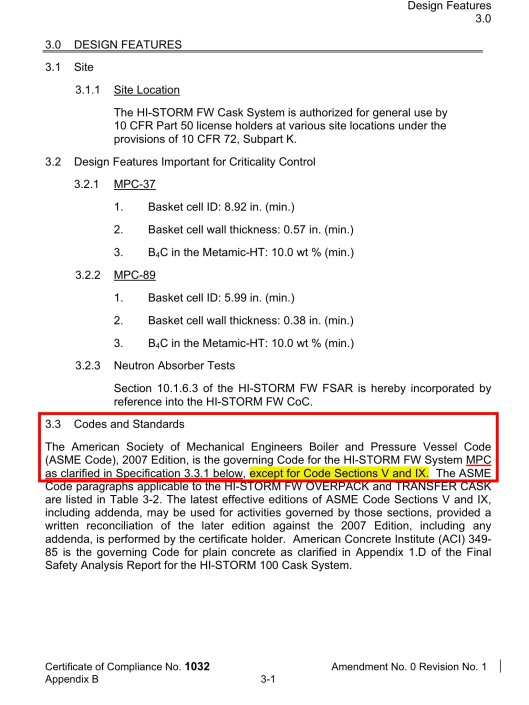 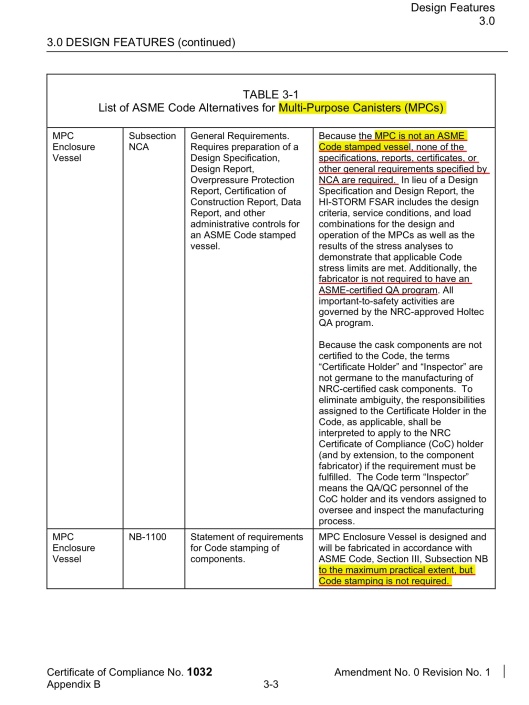 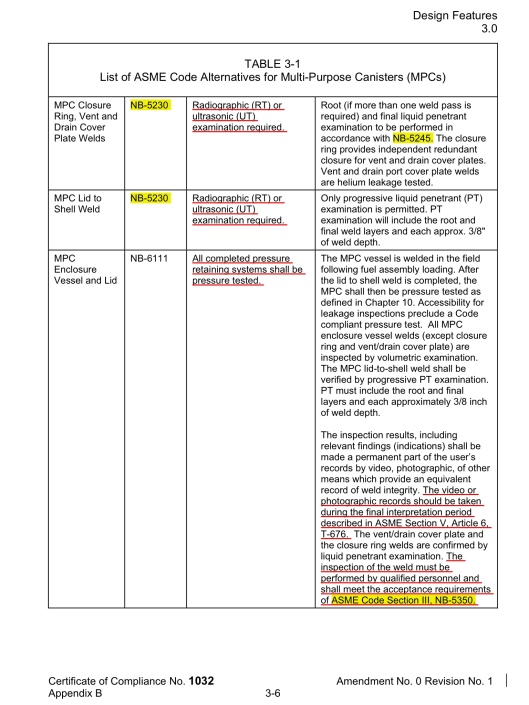 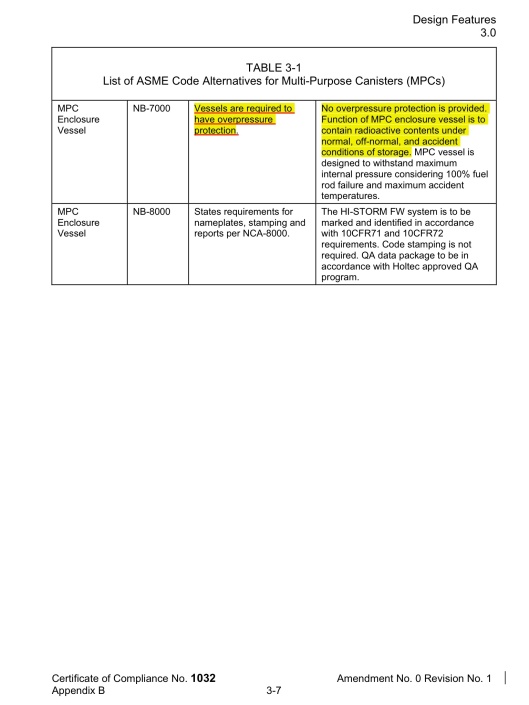 “CERTIFICATE OF COMPLIANCE NO. 1032 APPENDIX B
APPROVED CONTENTS AND DESIGN FEATURES
FOR THE HI-STORM FW MPC STORAGE SYSTEM
http://www.regulations.gov/contentStreamer?documentId=NRC-2015-0134-0005&disposition=attachment&contentType=pdf