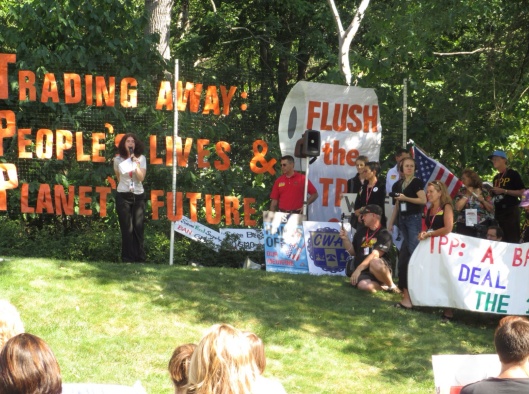 Opposition cuts across demographic groups; includes majorities of women and men, voters over and under 50, college and non-college educated voters, and independents.

WASHINGTON, DC – In a recently released poll from the Coalition for Better Trade, a clear majority of voters who can offer an opinion about the proposed Trans-Pacific Partnership Trade Agreement (TPP) say they oppose the deal. Of those voters who offered an opinion of TPP, 60 percent were opposed to the deal, and 30 percent were in favor. This deal is currently being negotiated by the Administration in Atlanta.

“While there is still some awareness building that needs to happen around TPP, the large majority of voters who know anything about it, oppose it wholeheartedly. They’ve seen the devastating effects that prior trade deals have had on American workers, and they don’t want more of the same,” said Khristyn Brimmeier, Communications Director for the Coalition for Better Trade. “In fact, the top concerns voters had were the negative consequences that the TPP would have on American jobs and wages, and the fact that this deal has been negotiated in secret. Voters do not like the idea that neither the public nor Congress has been allowed to see the provisions of the deal.”

“Voters are opposed to TPP, and the Administration and Congress should listen to what they have to say. Rather than continue to push for a deal based on 25 years of failed policy, the Administration and Congress should heed the public demand for a trade policy that’s transparent rather than one developed in secret and at the hand of global corporations, and one that will keep good jobs at here at home,” Brimmeier continued.

These findings are based on a national survey of 881 registered voters reached via live telephone interviews on both landlines and cell phones. The survey was conducted September 24-27, 2015 by Greenberg Quinlan Rosner Research on behalf of the Coalition for Better Trade. The margin of error for results is +/-3.30 percentage points at a 95 percent confidence interval.
#####
FOR IMMEDIATE RELEASE September 30, 2015 CONTACT: Khristyn Brimmeier Email: krbrimmeier@gmail.com Mobile: 412-400-9808
The Coalition for Better Trade is made up of labor unions, environmental groups, and other organizations working to oppose the corporate trade agenda and fight back against the Trans-Pacific Partnership (TPP).”