May 2014 Wildfire at Camp Pendleton, viewed from San Onofre Nuclear Generating Station. San Onofre Generating Station Firefighters had to help Camp Pendleton. Now Camp Pendleton is responsible for San Onofre due to S. Cal Edison cost-cutting, approved by the NRC! “A wildfire broke out on the Camp Pendleton Marine Base north of San Diego… The smoke could be seen by staff at the San Onofre Nuclear Generating Station and a handful of non-essential plant workers were sent home as a precaution./ Members of the plant’s fire department responded to the event and sprayed water on vegetation at the plant’s South Yard to retard the fire’s progress. San Onofre also dispatched some of its personnel to Camp Pendleton to assist base personnel with firefighting efforts on the ground, while helicopters from the Marine base dropped buckets of water on the fire./ The blaze, … was sparked by an accident on Interstate 5, …“Victor Dricks,NRC http://public-blog. nrc-gateway.gov/tag/san-onofre/

Southern Cal Edison, owner of San Onofre Nuclear Power station, appears out-of-control with both unfair and dangerous cost-cutting: “We learned that SCE began downsizing its workforce last year, laying off hundreds of American workers and replacing them with contracted foreign H-1B workers, while at the same time outsourcing a majority of its information technology (IT) work. Unfortunately, such practices are not uncommon and have become increasingly popular in the IT industry. We urge you to investigate these practices… SCE hired the two biggest foreign owned IT consulting companies, Infosys and Tata, to replace American workers with temporary H-1B workers to do the very same jobs and for less. Reports from laid off workers that they were forced to train their H-1B replacements seems to indicate their replacements had no superior skills. Further, according to USCIS data, the average wage for an H-1B employee at Infosys in FY 13 was $70,882 and for Tata it was $65,565 compared to the average wage of a Computer Systems Analyst in Rosemead, CA, (SCE headquarters), which is $91,900. At a time of economic recovery, where good paying and stable jobs are hard to come by, these practices are extremely troubling and must be examined.” http://chu.house.gov/press-release/reps-chu-sanchez-and-schiff-call-investigation-alleged-h-1b-abuse-southern-california. (From “Reps. Chu, Sanchez, and Schiff Call for Investigation into Alleged H-1B Abuse by Southern California Edison” May 6, 2015, letter to the US DOL, US Dept. of Homeland Security and US DOJ.) 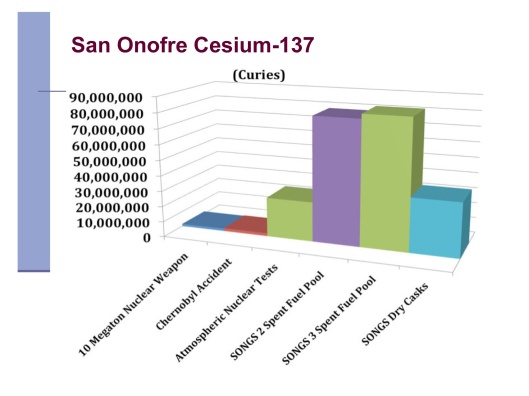 “In June 2015, the Nuclear Regulatory Commission (NRC) approved elimination of off-site emergency planning for San Onofre, even though they know the waste is extremely dangerous. This means fewer emergency planning staff, reduced funding and less radiation monitoring. The NRC claims risk is low. However, they based that on old information (NUREG-1864) that didn’t address stress corrosion cracking that may occur as soon as 2020 at San Onofre… The San Onofre fire staff has been reduced. The nuclear plant’s fire and rescue vehicles will be donated to new homes soon, according to Patrick Baughman, San Onofre fire marshal. San Onofre now has an agreement that makes the Camp Pendleton Fire Department the primary firefighting force for the nuclear plant… Evacuation zones described below are no longer in place for communities impacted by a radiation release from San Onofre… The emergency plan is to shelter in place… Suffocation could occur if you keep the shelter tightly sealed for more than a few hours. You should remove the plastic and duct tape and ventilate the room within a few hours. [If the radiation leak lasts more than a few hours, there is no viable safe plan. If the radiation plume passes, the ground will probably still be contaminated]…” http://sanonofresafety.org/emergency-planning-resources/

US Senate Hearings: “Time and again, we hear about how U.S. workers are being laid off and forced to hire their replacements, many of whom are not truly skilled. This is the case with Southern California Edison, a utility company that started laying off 500 American workers from its “IT” department last August. The company replaced them with foreign H-1B workers. The company opted to lay off Americans and instead contract that work out to two overseas-based IT consulting companies, which also happen to be some of the largest users of H-1B visas. In 2013, one of the two IT companies paid $34 million in a civil settlement after allegations of systemic visa fraud and abuse, but was not prohibited from continuing to petition for H-1B workers.” See more here http://www.judiciary.senate.gov/imo/media/doc/03-17-15%20Grassley%20Statement1.pdf and here: http://www.judiciary.senate.gov/imo/media/doc/Palmer%20Testimony.pdf

“My concern about NRC’s commitment to identify and remedy safety problems is also highlighted by my investigation into the installation of defective equipment at San Onofre. For example, I learned that NRC staff was preparing to allow the re-start of one of the reactors before it had received a single answer to any of the technical safety questions it asked Southern California Edison to submit. This oversight investigation is important, not only to get to the bottom of the problems at San Onofre, but also to avoid disastrous problems like this in the future. I am also concerned that whistleblowers at NRC feel they have no recourse but to contact Congress to report safety problems, because NRC’s internal procedures for addressing these concerns are broken./ Remarkably, NRC is continuing to obstruct my investigation by withholding documents that the Committee has a right to receive. Let me be clear — the NRC has no legal right whatsoever to refuse to provide the Committee with these documents,…” (Sen. Boxer, June 2014)
http://www.epw.senate.gov/public/index.cfm/press-releases-democratic?ID=0768CDE2-C089-303F-1E2F-3F3487ED2EB2

H1-B visas impact not just IT jobs but professors and other professionals, as well. This isn’t about poor desperate refugee-migrants, but those who are well-heeled enough to get degrees and who could stay at home. Often Americans have large student loan debt to get their degrees. Then they ask why the student loan defaults? And, as seen below, it’s sometimes a lose-lose deal for the foreign worker, as well as for the local worker.
From:
“U.S. Attorney’s Office
District of New Jersey
FOR IMMEDIATE RELEASE
Wednesday, May 13, 2015
Two Employees Of Information Technology Companies Arrested For Harboring Foreign Workers

Hiral Patel, 32, and Shikha Mohta, 31, both of Jersey City, New Jersey, were each charged by complaint with one count of conspiracy to bring in and harbor aliens and to obstruct justice. They are scheduled to make their initial court appearances this afternoon before U.S. Magistrate Judge Mark Falk in Newark federal court.

According to the complaint:

SCM Data and MMC Systems offered consultants to clients in need of IT support. Both companies recruited foreign nationals, often student visa holders or recent college graduates, and sponsored them for H-1B visas. The H1-B program allows businesses in the United States to temporarily employ foreign workers with specialized or technical expertise in a particular field, such as accounting, engineering or computer science. As part of the H-1B program, the Department of Homeland Security (DHS) and the Department of Labor (DOL) require employers to meet specific labor conditions to ensure that American workers are not adversely impacted, while the DOL’s Wage and Hour Division safeguards the treatment and compensation of H-1B workers. Congress sets a numerical cap for the admission of skilled workers into the United States.

In some instances, Patel, Mohta and others generated false payroll records to create the appearance that the foreign workers were paid full-time wages. On multiple occasions the conspirators required workers to pay SCM Data or MMC Systems their gross wages in cash. In exchange, SCM Data or MMC Systems would subtract taxes and fees and issue payroll checks to the foreign workers in a smaller amount. The conspirators then encouraged the foreign workers to submit the bogus payroll checks to the DHS as proof that the workers were engaged in full-time work despite the fact that they were not working for SCM Data and MMC Systems.

The conspiracy charge with which Patel and Mohta are charged carries a maximum potential penalty of five years in prison and a $250,000 fine.

U.S. Attorney Fishman praised special agents of the U.S. Immigration and Customs Enforcement’s (ICE) Homeland Security Investigations (HSI), under the direction of Acting Special Agent in Charge Kevin Kelly, and the Department of Labor, Office of Inspector General, Office of Labor Racketeering and Fraud Investigations, under the direction of Special Agent in Charge Cheryl Garcia, with the investigation leading to the charges.

The government is represented by Assistant U.S. Attorneys Anthony Moscato and Francisco J. Navarro of the U.S. Attorney’s Office Criminal Division in Newark.

The charges and allegations contained in the indictment are merely accusations, and the defendants are presumed innocent unless and until proven guilty.

It’s also a short-cut to a green card:
“Even though the H-1B visa is a non-immigrant visa, it is one of the few visa categories recognized as dual intent, meaning an H-1B holder can have legal immigration intent (apply for and obtain the green card) while still a holder of the visa.” https://en.wikipedia.org/wiki/H-1B_visa

This isn’t limited to “technical” degrees but immigrants are also brought in to take teaching positions in fields, such as sociology and political science, where there has long been an overabundance of (mostly unemployed) Ph.Ds.