Just how independent is the SA nuclear review and are opponents being side-lined? Noel Wauchope looks at just who the Royal Commission met on its recent visit to France.

On the Commission’s website, they list the destinations for the Commission’s overseas tour, now about to wind up. I was struck by the amount of time allocated to conferring with the French nuclear energy corporation, AREVA. I had to wonder — in their discussions with AREVA, it would hardly be necessary to talk with nuclear opponents. I wondered how much AREVA would be going to come clean about what really is going on, in France’s nuclear industry.

The AREVA connection with Australia is important. AREVA has an office in Wayville, in Adelaide, and has hosted South Australian parliamentary tours of their nuclear industrial facilities in France. AREVA acquired the Northern Territory Koongarra uranium deposit in 1995, but subsequently, in a David and Goliath battle with Aboriginal traditional owner, Jeffrey Lee, lost this opportunity, as Lee donated his land to Kakadu National Park.

AREVA is in a joint venture with Toro Energy, in uranium exploration in the Northern Territory. The corporation had been exploring for uranium in Queensland’s Karumba and Carpentaria basins since about 2012, but recently pulled out altogether. AREVA will probably be making a submission to the Royal Commission. However, the Commission, in publishing submissions, will not be publishing ones that are deemed “commercially sensitive“. 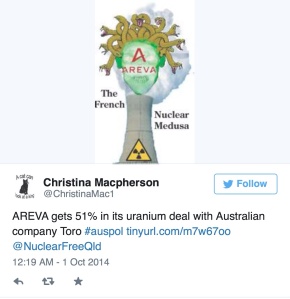 Without doubt, AREVA has a keen commercial interest in Australia. France’s nuclear industry is somewhat embattled, as its fleet of reactors near the end of their shelf life, and the government is pledged to cut down on nuclear power, and develop renewables. The French nuclear industry (like USA’s) depends for its survival, on selling nuclear technology overseas.

But what of the fortunes of AREVA itself? As the Royal Commission seeks to learn about the commercial viability of the nuclear industry, AREVA is hardly the most reliable authority on that question.

For a start, AREVA now barely exists. Its core business was designing, building and servicing nuclear reactors. As of 3 June this year, the business heart has been torn out. It is now reduced to the mining, enriching, and disposing, of uranium. The state-owned corporation has just been broken up, in a government move to salvage it from bankruptcy. Its core business goes now to state-owned Électricité de France S.A.(EDF). And that’s seen as a poisoned chalice for EDF, too. Their shares plummeted once the salvage deal became known.

News about AREVA, over recent years, has been a litany of mismanagement, legal cases, safety problems,sinking share price, environmental degradation and all sorts of trouble in Africa. Prominent in AREVA’s and EDF’s woes has been the long drawn out and super-expensive projects at Olkiluoto (Finland) and at Flamanville (France) — with designs that are now considered likely to be unsafe.

It is concerning to learn that the Royal Commission is taking an interest in AREVA’s Mixed Oxide Fuel (MOX) technology, which has been a financial disaster in USA.

So far, so good. After all, we didn’t really expect them to be meeting Greenpeace or Friends of the Earth.

On the 9th of June, the Commission met the World Nuclear Association, the Nuclear Industry Association, Nuclear Decommissioning Authority, and the Department for Business Innovation and Skills, (who appear to have no policies on the nuclear industry).

While I am tempted here to go into a discussion on the problems besetting UK’s nuclear industry, and, in particular, the Nuclear Decommissioning Authority, my real interest is in what went on when the Commission visited France.

Presumably Saturday and Sunday were for the tourism highlights of Paris.

Discussion of the Nuclear Energy Agency’s work on economic modelling its role in the forum on stakeholder confidence.

Meeting with the beleagured AREVA.

Discussion of future nuclear energy demand, barriers to investment in the nuclear fuel cycle and the economics of investment.

Meeting with representatives from the Ministry of Ecology, Sustainable Development and Energy, the Institute for Radiological Protection and Nuclear Safety (IRSN), the French national radioactive waste management agency (ANDRA) and the French Alternative Energies and Atomic Energy Commission (CEA).

Discussion of the legislative framework for nuclear activities in France, the status of nuclear waste disposal and information transparency initiatives.

Monday’s schedule sounds very worthy, but also a lot packed into one day, before they rushed off to UK. I would like to think that Kevin Scarce’s Royal Commission was fully investigating nuclear industry issues — not just the geewhiz technology that they would be shown in France by AREVA, which is all too cosy with South Australian pro-nuclear politicians and businessmen.” CC-BY-NC-ND-3.0 Australia: https://independentaustralia.net/environment/environment-display/sas-nuclear-royal-commission-all-too-cosy-with-failed-french-nuclear-giant-areva,7820 (Embedded Links at original)