March 12th 2015 1pm – train going to Sellafield fully loaded with 6 flasks, that morning a gas explosion took place in Seascale in a house just feet away from the tracks. 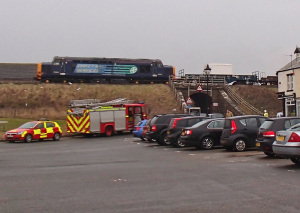 The fluffy image of the cute bear above  is how Direct Rail Services like to portray themselves.

This is far from the truth.

The two photographs above were taken by Radiation Free Lakeland within a few minutes of each other.  One shows a fully loaded nuclear waste train going to Sellafield and just a couple of minutes later a train with…