The most obvious point is that they only mention State and American Indian Tribal governments, whereas local governments are supposed to be included – by law, as well as by moral right: “(a) State, local governmental bodies, and affected, Federally-recognized Indian Tribes may participate in license reviews as provided in subpart J of part 2 of this chapter. A State in which a repository for high-level radioactive waste is proposed to be located and any affected, Federally-recognized Indian Tribe shall have an unquestionable legal right to participate as a party in such proceedings.” http://www.nrc.gov/reading-rm/doc-collections/cfr/part060/part060-0063.html

That’s a whole lot of overhead! Some, but not all, NRC workers earn fat-cat salaries compared to the average taxpayer and ratepayer, but not that fat-cat! Any extra money by location still doesn’t account for the high figure. https://www.opm.gov/policy-data-oversight/pay-leave/salaries-wages/salary-tables/pdf/2015/salhrl.pdf

Even navel gazing by the NRC workers costs money, as well as writing inane documents, like the one they request comment on, so why not just do their work? The NRC’s proposed FY 2016 budget is over one billion dollars, which they write as $1,032.2 million, clearly in order to confuse people. This includes 3,754.1 full-time equivalents (FTE). http://www.nrc.gov/reading-rm/doc-collections/nuregs/staff/sr1100/v31/

This is what the document to comment says: “Section 60.62 involves NRC staff review of requests for consultation. This should require no more than 40 hours of staff time per response. At $279 per hour for staff time,this would be $11,160 per respondent. The total for one response is $11,160.

Section 60.63 involves NRC staff review of proposals for participation in site review and licensing procedures. This should require no more than 80 hours of staff time per response. At $279 per hour,this would be $22,320 per respondent. The total for one response is $22,320.

Section 60.65 involves NRC staff review of the statement of representation. This should require no more than one hour of staff time per response. At$279 per hour, this would be $279 per response. The total for one response is $279.

Total cost to the government is $33,759(121 hours x $279/hr). Costs are not anticipated to be recurrent and thus cannot reasonably be annualized. Rather, all costs are likely to be incurred within a year or two following selection of a repository site or submittal of a license application. These costs are fully recovered by NRC through appropriations from the Nuclear Waste Fund which was established by the Department of Energy pursuant to the Nuclear Waste Policy Act of 1982.” http://www.regulations.gov/contentStreamer?documentId=NRC-2015-0108-0002&disposition=attachment&contentType=pdf

There won’t be many State, Tribal or Local Government participants but they are going to make these few apply for help from the NRC and charge a fortune for it! Shouldn’t it be assumed that they need or want assistance?

They end by saying that the amount will be recovered from the Nuclear Waste Fund, which itself has been funded by the ratepayer, but in 2014 “As a result of a lawsuit brought by the National Association of Regulatory Utility Commissioners (“NARUC”)… the U.S. Department of Energy (“DOE”) was forced late last week to halt collection of fees added to the bills of nuclear power customers for the Nuclear Waste Fund (“NWF”), which was instituted in 1982 to pay for a national storage site for the nation’s civilian nuclear waste.” http://www.psc.state.ms.us/commissioners/northern/press%20releases/2014/Presley%20Celebrates%20Victory%20in%20Nuclear%20Waste%20Fund%20Dispute.pdf

“ON-SITE REPRESENTATIVE–The Secretary shall offer to any State, Indian tribe or unit of local government within whose jurisdiction a site for a repository or monitored retrievable storage facility is located under this title an opportunity to designate a representative to conduct on-site oversight activities at such site. Reasonable expenses of such representatives shall be paid out of the Waste Fund.” NUREG-0980 Vol. 1, No. 10, Nuclear Regulatory Legislation http://pbadupws.nrc.gov/docs/ML1327/ML13274A489.pdf 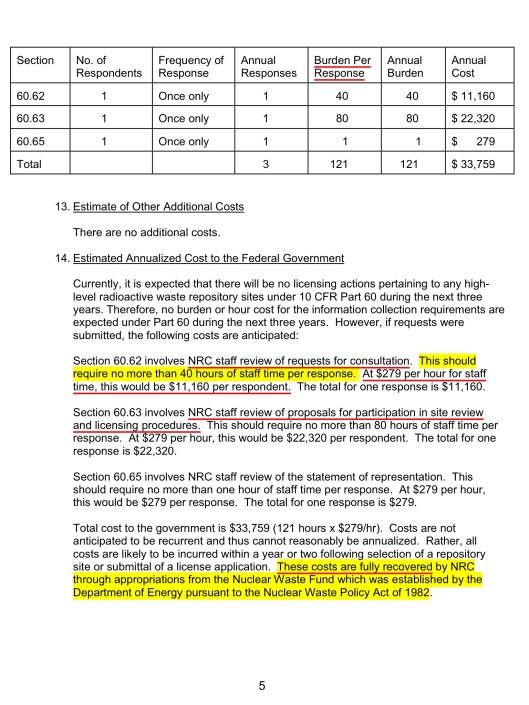 “Home > NRC Library > Document Collections > NRC Regulations (10 CFR) > Part Index > § 60.61 Provision of information Subpart C–Participation by State Governments and Affected Indian Tribes Source: 51 FR 27164, July 30, 1986, unless otherwise noted.
§ 60.61 Provision of information.
(a) The Director shall provide to the Governor and legislature of any State in which a geologic repository operations area is or may be located, and to the governing body of any affected Indian Tribe, timely and complete information regarding determinations or plans made by the Commission with respect to the site characterization, siting, development, design, licensing, construction, operation, regulation, permanent closure, or decontamination and dismantlement of surface facilities, of such geologic repository operations area.
(b) For purposes of this section, a geologic repository operations area shall be considered to be one which “may be located” in a State if the location thereof in such State has been described in a site characterization plan submitted to the Commission under this part.
(c) Notwithstanding paragraph (a) of this section, the Director is not required to distribute any document to any entity if, with respect to such document, that entity or its counsel is included on a service list prepared pursuant to part 2 of this chapter.
(d) Copies of all communications by the Director under this section are available at the NRC Web site, http://www.nrc.gov, and/or at the NRC Public Document Room, and copies are furnished to DOE.
[51 FR 27164, July 30, 1986, as amended at 64 FR 48954, Sept. 9, 1999]
Page Last Reviewed/Updated Thursday, July 10, 2014”
http://www.nrc.gov/reading-rm/doc-collections/cfr/part060/part060-0061.html