In the last post was discussed the comment deadline for US NRC “Cornerstones” for Nuclear Fuel Facilities, and how the only comment submitted and uploaded to the Federal Regs site was by US NRC Manager Kevin Ramsey. His submittal states that the Emergency Cornerstone should be deleted. He has been at the US NRC for 29 years – since around the time of the Chernobyl and Sequoyah accidents. He came from the US Nuclear Navy: https://miningawareness.wordpress.com/2015/07/12/us-nrc-manager-comments-on-nrc-document-opposes-emergency-preparedness-for-nuclear-fuel-facilities-comment-deadline-monday-13-july-11-59-pm-ny-dc-et/
Well, here he is again – named by a retired Quality Assurance Engineer as an apparent opponent to safety:
“The Project Manager for the NRC (Kevin Ramsey) sent a letter to the NFS Safety Manager (Moore) in Aug 2009 delineating the necessary requirements for re-licensing of the plant. Conspicuous in its intentional absence from this licensing letter is any reference to 10 CFR 70/72 (f) [the NQA requirement for plant operation]. It seems early on, that the NRC learned from the plant lobbyists that they had a marketable item in NOT requiring these plants to have Nuclear Quality Programs and the NRC has been playing NUCLEAR ROULETTE with the Safety of the Public ever since!” (Buzz Davies, Nuclear Quality Engineer, retired).

I was not in the loop to hear about the Knoxville meeting until it was to late to prepare a speech.

However, I am writing to you requesting that you convey to the DOE, that from my view point, the commercialization of Highly Enriched Special Nuclear Materials has been a decades long fiasco. I would recommend that the regulation and control of ALL these Nuclear Fuel Re/Processing Plants be immediately removed from the jurisdiction of the Nuclear Regulatory Commission.

Historically, there was Apollo, PA that now has over 800 operator lawsuits from public CANCER VICTIMS and Hundreds of Millions left in decontamination/decommissioning costs. There was Rocky Flats where there are currently over Fifteen Hundred CANCER VICTIMS and because of multiple fires/explosions and releases of Plutonium that the NRC bought 10,000 Acres —(that’s 16 sq. miles) of contaminated adjacent land as a human excluded permanent wild life preserve. Of course there is Nuclear Fuel Services here in Erwin, that over the years has had multiple releases of literally Hundreds of Pounds of Highly Enriched Uranium Hexaflouride gas, Plutonium and other radioactive materials. The plant operator is currently being sued by over Two Hundred CANCER VICTIMS and there are hundreds more as far away as 20 miles that I can provide you with their names and addresses. Additionally, there are measurable qualtities of HEU in the Nolichuky River as far away as Douglas Lake (50 miles) and Plutonium in the local creeks and estimated decontamination/decomissioning costs of Four Hundred Million dollars.

All these decades of thousands of failures at multiple sites simply cannot just be attributed to commercial learning curves, they are the direct result of the intentional deletion by the NRC of Nuclear Quality Assurance Program requirements of the Code of Federal Regulations e.g. (10 CFR 50 Appendix B NQA-1) from the Licensing requirements for ANY/ALL of these Nuclear Chemical Re/Processing Plants. Quite simply, without Nuclear Quality Programs you have NO ASSURANCE that any Items Relied On For Safety even work — Hence NO SAFETY exists! The NRC has recently re-licensed NFS to process pyroforic forms of HEU and Plutonium. The Project Manager for the NRC (Kevin Ramsey) sent a letter to the NFS Safety Manager (Moore) in Aug 2009 delineating the necessary requirements for re-licensing of the plant. Conspicuous in its intentional absence from this licensing letter is any reference to 10 CFR 70/72 (f) [the NQA requirement for plant operation]. It seems early on, that the NRC learned from the plant lobbyists that they had a marketable item in NOT requiring these plants to have Nuclear Quality Programs and the NRC has been playing NUCLEAR ROULETTE with the Safety of the Public ever since! You need only review the Licensing documents for any of these plants to observe the ABSENCE of QUALITY POSITIONS in the ORGANIZATIONAL CHARTS to confirm what I am relating.

Not only are these Nuclear Chemical Plants a threat to the environment and the public, but there are recent deroggatory reports from Vermont Yankee, Palesaides, MI, Comanche, TX, Turkey Point, FL and a Nuclear News report that 62 out of 104 Nuclear Power Plants under NRC regulation suffered emergency shutdowns in 2011. Well a 60% emergency shutdown failure rate for the Nuclear Power Plants in the entire country has to be just a few steps away from another Three Mile Island at multiple locations.

The Nuclear Regulatory Commission as it currently exists must be removed from control of ALL Nuclear Fuel Re/Processing Plants and jurisdictional control be returned to the DOE as the NRC is so corrupted at so many levels as to render it unfit to license or regulate. Indeed, the NRC is the biggest nuclear threat to the Safety of the Public in the entire country!

Please feel free to contact me concerning any of this or any additional information that I can provide.

With all due concern,

The following was attached to the email submittal, and presumably submitted and written by Mr. Davies, as well. It really says it all. 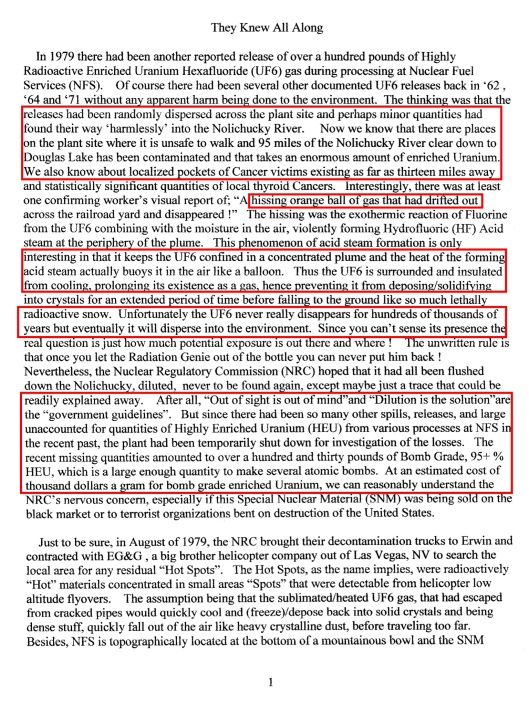 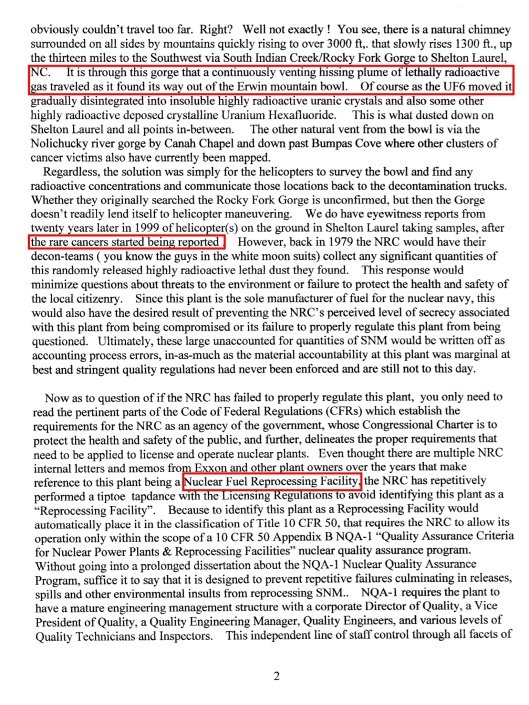 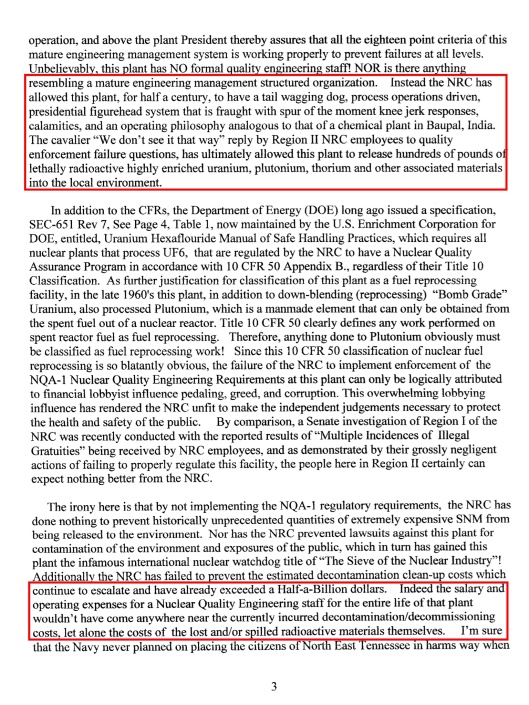 The Nolichucky River eventually flows to the Tennessee River, part of which goes on to the Ohio and Mississippi Rivers and out to the Gulf of Mexico. Part of which goes to the man-made Tennessee Tom-Bigbee waterway, which also empties into the Gulf of Mexico. Around 200 years ago, this region belonged to the American Indians. In less than 100 years it has been permanently destroyed with deadly, long-lived radioactive materials.

He probably really means Exxon and not Exelon! Exxon did Nuclear Fuel Fabrication at Hanford: http://pbadupws.nrc.gov/docs/ML0729/ML072960026.pdf 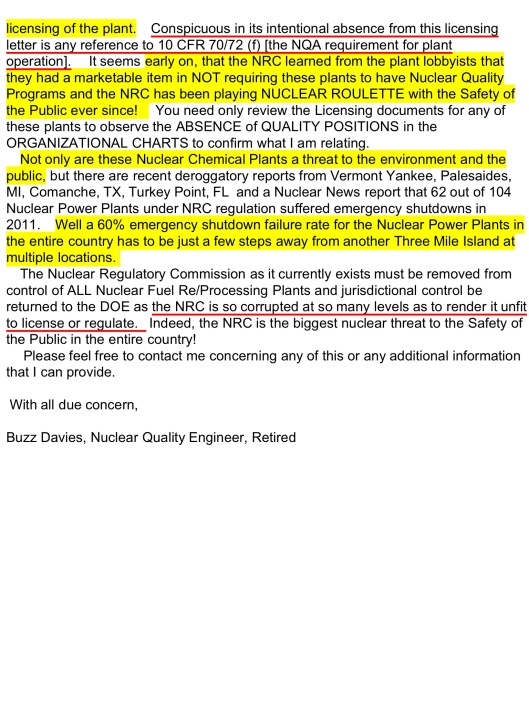