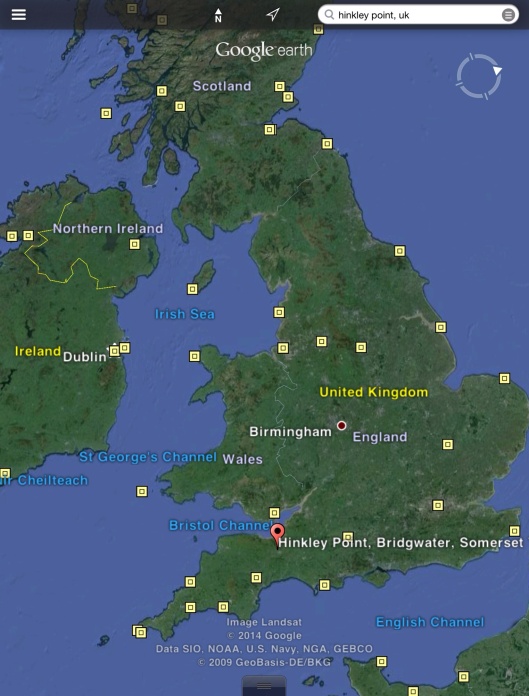 In May 2013, The National Trust for Ireland, An Taisce, “launched judicial review proceedings in London to challenge the legality of UK Secretary of State Ed Davey’s decision to grant permission to build and operate a nuclear power station at Hinkley Point in the Bristol Channel, Somerset, 150 miles from the Irish coast… Despite the nuclear power plant being nearer to the coast of Ireland than it is to Leeds, the UK decided not to consult with the Irish public about the decision before it granted consent in 2013. The first time many Irish people learned about the nuclear power plant proposal was when the decision was announced.“[1] Not surprisingly, they lost in UK courts, in August of 2014.

Apparently less well-known is a case still pending against the UK over its violation of the Espoo Convention, which requires trans-boundary consultation regarding trans-boundary environmental impacts. This complaint was lodged in March 2013 by a member of the German Parliament and the Irish NGO Friends of the Irish Environment, because the UK did not consult with either the Irish or German people regarding the proposed new EDF Nuclear reactors at Hinkley Point. The UK will also have to consult with other countries regarding the proposed new Moorside Nuclear reactors, if Espoo is upheld. At a bare minimum this would appear to include the Irish and Scottish people, neither of whom will want more nuclear reactors on their doorsteps, poisoning them. The Espoo Implementation Committee appears to think that consultation should include many more countries. Neighboring countries should probably be consulted before operating extensions are granted to the old nuclear reactors, too.

According to an update, at the end of May, there won’t be a ruling until AFTER March 2016! The Espoo Convention Implementation Committee expressed “profound suspicion of non-compliance” by the UK regarding Hinkley Point.

Excerpted from “Meeting of the Parties to the Convention on Environmental Impact Assessment in a Transboundary Context“, 26–28 May 2015, “Item 3 of the provisional agenda Implementation and compliance”

4. In March 2013, a member of the German Parliament and the Irish non-governmental organization (NGO) Friends of the Irish Environment provided information to the Implementation Committee, regarding the planned construction of the NPP in HPC by the United Kingdom and alleging non-compliance by the United Kingdom with its obligations under the Convention, noting that Germany and Ireland had not been notified and their public had not been consulted on the planned activity.

5. The Committee began consideration of the information provided at its twenty-eighth session in September 2013 (information gathering under the symbol EIA/IC/INFO/12). From September 2013 to February 2014, the Committee solicited relevant information from the United Kingdom, Germany, Ireland, as well as Austria, the only Party that had requested to exchange information and hold discussions for the purposes of the transboundary environmental impact assessment (EIA) procedure, considering itself that it was likely to be affected by the transboundary impact of the proposed activity. Moreover, information was requested from countries neighbouring the United Kingdom, i.e., Belgium, Denmark, France, the Netherlands, Norway, Portugal and Spain.

6. At its thirtieth session in February 2014, having considered the information gathered, the Committee found that there was a profound suspicion of non-compliance and decided to begin a Committee initiative further to paragraph 6 of its structure and functions (under the symbol EIA/IC/CI/5). The case was discussed with the United Kingdom at the Committee’s thirty-third session in March 2015.

7. According to its operating rules and based on the information available to it, the Committee is preparing its draft findings and recommendations on closed session. The draft may be completed at the Committee’s thirty-fourth session (scheduled in November/December 2015). The Committee is then expected to send the draft to the United Kingdom, inviting its comments or representations, and at its subsequent session (in March 2016) to consider any comments or representations received, before it finalize its findings and recommendations.“[2] (emphasis added)

An Irish NGO has launched a legal challenge seeking the suspension of the development of the proposed UK nuclear plant in Somerset, England until consultations with the Irish public are completed

The challenge has been made by the environmental lobby group Friends of the Irish Environment to the United Nations Economic Commission for Europe for the failure of the United Kingdom in compliance with its obligations under the Convention on Environmental Impact Assessment in a Transboundary Context.

It follows on the group’s unsuccessful requests to the Irish authorities to ensure Ireland was consulted as part of the UK public consultation.

Under the Convention, consultations with Ireland should have included the potential transboundary impact of the proposed activity and measures to reduce or eliminate its impact…“[3]

According to Tony Lowes of Friends of the Irish Environment: “the proposed new nuclear power plant at Hinkley C in Somerset has not been subject to trans-boundary assessment as the ‘likely impacts determined through a thorough EIA do not extend beyond the county of Somerset and the Severn Estuary’, according to the Environmental Impact Assessment.

We understand from informal conversations with the Radiological Protection Institute that Ireland was not formally notified under the trans boundary requirements of the Espoo Convention or otherwise; we assume this is because the UK authorities contend there are no trans boundary impacts. That such is not the case is a matter of simple reason.

Under certain meteorological conditions a nuclear release from Hinkley Point could cause widespread contamination in Ireland. Such releases are not impossible. A conservative worst case release scenario should have been included in the EIA because of its relevance for impacts at greater distances.

These concerns are highlighted because costs associated with new safety features (in part caused by the Fukushima Daiichi nuclear disaster) have led to an increase in the output of the plant by an unprecedented higher burn-up of fuels and for the use of MOX, increasing the potential of danger in comparison with the latest Generation II plants. There is a manifest risk of a nuclear release and certainly, it cannot be proven beyond doubt that a large release cannot occur. In that context the EIA must consider the consequences of such a release and what preparations should be considered for such an event…” He also points out that: “Windscale, now Sellafield, October 1957. [Scale 5] Oct. 10 1957, a reactor core began to burn. In an attempt to extinguish the fire, a radioactive cloud was released, followed by a second one the next day. The radiation reached as far as Switzerland. The fires were only brought under control after two days. Cow’s milk in a radius of 200 miles from the reactor should not be consumed. In reality, the population surrounding the reactor received radiation doses 10 times higher than that seen as permissible for a lifetime.” Excerpted from “Information for the attention of Implementation Committee, Convention on Environmental Impact Assessment in a Transboundary Context (Espoo, 1991)“, by Tony Lowes, FIE, 11 pp. Includes detailed fallout map for Ireland. [4] (Emphasis added)

The NuGen “Moorside Development Environmental Impact Assessment Scoping Report“, May 2015, makes clear that they intend to exclude trans-boundary impacts, as well, if allowed:

Regarding their emissions of radionuclides into the air they state: “6.7.5 Owing to the relatively modest scale of emissions to atmosphere, it is not considered that likely significant effects would arise within other Member States of the European Union, nor in other countries. On that basis, potential transboundary air quality effects arising from the Moorside Project have been scoped-out of the EIA.” (p. 109, emphasis added.) It will have impact, of course, especially in the event of an accident. The radionuclides don’t magically disappear.

For emissions of radionuclides into the water they clearly exclude Ireland, Norway, and Scotland, all of whom are impacted by Sellafield radionuclide emissions and will definitely be impacted by Moorside Nuclear emissions: “7.5.3 For liquid discharges, the zone of influence for representative persons will be within the boundary of the local marine compartment, i.e. a water volume where the initial mixing of the discharge from the proposed power station into the marine environment is assumed to occur. For the Moorside Project the relevant local marine compartment has a coastal length of 20 km, a depth of 20 m and extends 5 km into the Irish Sea (Methodology for Assessing the Radiological Consequences of Routine Releases of Radionuclides to the Environment (European Commission 1995 and HPA-RPD-058 (Smith and Simmonds, 2009)). If the outfall extends beyond the local marine compartment (which is considered to be very unlikely at this stage) then other marine compartments offshore may also need to be included.” (p. 119) Norwegian salmon are of no consequence to them, of course. Nor are Scottish salmon.

Here they contradict themselves, and it is clear that they must consult with neighboring countries, under the Espoo Convention: “Potential environmental effects that NuGen proposes to assess as part of the EIA … accidental pollution of watercourses, water bodies and/or the marine environment…;(p.460) (AMEC for NuGen NG-007.319, May 2015)

In “Windscale fallout underestimated“, by Rebecca Morelle-BBC News, 6 October 2007, one finds a rare map of the Windscale (now Sellafield) fallout plume: http://news.bbc.co.uk/2/hi/science/nature/7030536.stm It seems to have traveled about the same distance as the Chernobyl fallout, which reached as far as the UK and Ireland.

The above Windscale fallout map (supported by distance from Chernobyl to the UK, since Chernobyl impacted the UK) was used to make a rough map (below) showing estimated distance impacted, to help reflect upon the broader repercussions of an accident at the Sellafield site, and at the proposed new nuclear reactors near Sellafield (Moorside). It gives a general idea of potential impacts of an accident at Hinkley Point, as well.

Where the fallout from a nuclear accident lands depends on wind direction and rain at the time of the accident.
“The direction of the wind is defined as the direction from which the wind is blowing. As Atlantic depressions pass the UK the wind typically starts to blow from the south or south west, but later comes from the west or north-west as the depression moves away. The range of directions between south and north-west accounts for the majority of occasions and the strongest winds nearly always blow from this range of directions. Spring time tends to have a maximum frequency of winds from the north east, due to a build of high pressure over Scandinavia at this time of year. Summer can have a greater incidence of north-west or west winds associated with sea breezes.” UK Met Office [6]

Contamination risk to Austria document by the Austrian government with map model of fallout: http://www.umweltbundesamt.at/fileadmin/site/publikationen/REP0413.pdf