The US DOJ reports that an Arkansas Man was sentenced to 15 Years for attacks on Central Arkansas Power Grid. The man was mentally deranged and not what is generally called a “terrorist”, though his act had the same impact.

He appears to be the product of the failure of America to provide mental health care and jobs to its own people for over three decades. Meanwhile, he’s supposed to pay Entergy millions, which he will never have, especially in prison, even as Entergy refuses to settle a wrongful death suit over a worker killed at its Arkansas nuclear power station. [1]

Both cases point to the need for backup energy supplies for cooling of nuclear reactors. The SAFER back-up to back-up is being run by French State owned AREVA, and another company, and they plan to fall back on the US State and Federal governments. The French depend on the US military and, after business hours, the Swiss on the French and Italians, in an emergency… So, why hire AREVA?

“ANO-1 entered TS 3.8.2 A, ‘One Required Offsite Circuit Inoperable’. All required actions are complete. The event caused a loss of decay heat removal on ANO Unit 1 which was restored in 3 minutes and 50 seconds.

At this time, the full extent of structural damage on Unit 1 is not known. There was one known fatality and 4 known serious injuries to workers. The local coroner is on site for the fatality and the injured personnel have been transported offsite to local hospitals. Investigation into the cause of the failure and extent of damage is ongoing.

On Unit 2, all rods inserted during the trip. The core is being cooled via natural circulation. Decay heat is being removed via steam dumps to atmosphere. There is no known primary to secondary leakage.

The licensee has notified the State of Arkansas, local authorities, OSHA and the NRC Resident Inspector.

These cases point to another danger of nuclear power:
“… nuclear reactors – all of them – depend on energy from the grid to operate. Since the core of a reactor continues to generate heat for years, even “off-line,” it is vital that emergency cooling equipment be operable around the clock. As is sensible, every reactor site is equipped with back-up power, most often in the form of diesel generators. Unfortunately these generators, in part because of intermittent use, are not terribly reliable. When both the grid and the back-up power fail, the site is said to be in “station blackout.” According to the US Nuclear Regulatory Commission, station blackout contributes a full one-half of the total risk of a major reactor accident at US nuclear power stations.”
http://www.nirs.org/climate/background/climatetalk_mary_un_050306.htm

And, who is operating the new back-up “SAFER” program but bankrupted, bailed-out, French State owned AREVA and PEICo. Their backup plan is to rely on US State and Federal mililtary. Glancing through the US NRC “evaluation” of the program is not reassuring. See more below DOJ Press Release. The goofiness is stressfully reminiscent of the Three Stooges.http://youtu.be/C6q37n7GDCY

From the US DOJ:
“FOR IMMEDIATE RELEASE
Thursday, June 18, 2015
Arkansas Man Sentenced to 15 Years for Attacks on Central Arkansas Power Grid
Jason Woodring, 38, of Jacksonville, Arkansas, was sentenced to 15 years in prison today on charges related to his attacks on Central Arkansas’ power grid between August and October 2013. In addition to the term of imprisonment, Woodring will be required to pay $4,792,224 in restitution to Entergy for his attacks on the power lines and electrical tower near Cabot, Arkansas, and a switching station in Scott, Arkansas. Woodring will also pay $48,729 to First Electric Cooperative for damage to the downed power lines and poles in Jacksonville.

Today, U.S. District Court Judge Billy Roy Wilson of the Eastern District of Arkansas accepted the plea agreement and imposed the recommended 15-year sentence. On March 10, 2015, Woodring pleaded guilty to destruction of an energy facility for downing the Cabot power lines and for setting fire to the Scott power station. He also pleaded guilty to using fire to commit a felony in relation to the arson in Scott, and to being an illegal drug user in possession of various firearms and ammunition. Woodring also agreed to forfeit the firearms and ammunition.

Woodring’s 2013 attacks included sabotaging an electrical support tower and downing a 500,000-volt power line onto a railroad track near Cabot, which resulted in approximately $550,000 worth of damage; setting fire to and destroying an Extra High Voltage switching station in Scott, causing over $4 million in damages; and cutting down two power poles, which led to the temporary loss of power to approximately 9,000 people in Jacksonville. Woodring was charged in an eight-count indictment by a federal grand jury on Nov. 6, 2013.

Excerpts re SAFER AREVA (NOT) 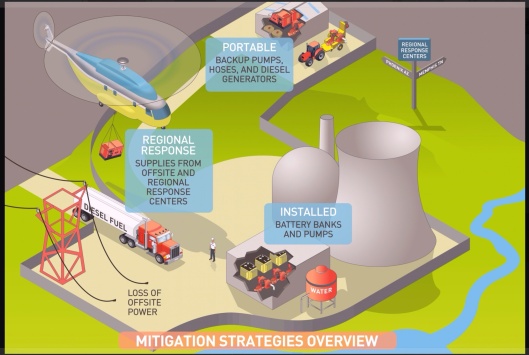 “The nuclear industry has officially opened two National Response Centers — in Memphis, Tenn., and Phoenix, Ariz… The centers, previously called Regional Response Centers, contain extra equipment to duplicate plants’ emergency diesel generators, pumps, hoses and so on. … An industry group, called the Strategic Alliance for FLEX Emergency Response (SAFER), is managing the response centers. This organization also has two control centers that are separate from response centers and would coordinate equipment deliveries.”
http://public-blog. nrc-gateway.gov/tag/safer/
Is the area of the New Madrid fault a place to put one?

“SAFER is comprised of a partnership between Pooled Equipment Inventory Company (PEICo) and AREVA, Inc… SAFER established and maintains two diverse and redundant equipment storage facilities identified as the National SAFER Response Centers (NSRCs). These NSRCs are located in Memphis, TN and Phoenix (Tolleson), AZ. The NSRCs contain portable equipment such as portable generators, portable pumps, hoses, and other supporting equipment (as described in the white paper) to be used by licensees to meet Phase 3 requirements of the order. SAFER has established plans, in part through contracts with Federal Express Custom Critical (FedEx Custom Critical or FCC) and commercial heavy-lift helicopter operators, to allow either one of the NSRCs to provide this equipment to any nuclear power plant in the United States. SAFER has also established two redundant SAFER Control Centers (SCCs) in Lynchburg, VA (primary) and Birmingham, AL (alternate) that will be manned and operated to coordinate the SAFER response for any such event.

In reviewing SAFER’s plans, NRC staff sought reasonable assurance that SAFER is capable of delivering the Phase 3 equipment within the time needed to support the licensees’ Integrated Plans, including delivery to a regional area potentially impacted by the BDBEE.” [BDBEE must mean Beyond Design Basis Emergency Event]
[…]
“During the demonstrations, NRC staff noted instances where the SAFER roles and responsibilities were not clear to the licensee… The NRC staff also reviewed an AREVA report titled “Regional Response Center Project: FedEx Memphis – Trip Report.” This report documented transportation of seven flatbed trailers with equipment from the Memphis NSRC to the Memphis Fed Ex hub. This was a timed exercise that tested the response center shipping procedures and was used to 1) validate and optimize packaging configuration for loading the SAFER equipment onto a FedEx plane, and 2) verify and streamline the timing sequence and planning assumptions for the SAFER Response Plans. The report provided details of the timed events and described lessons learned from the operation. Most notably, the report documented that it took 9.5 hours from event initiation to load and prepare the plane for departure. With the longest flight time from either NSRC to the farthest approved destination airport, this would result in a total delivery time to the destination airport of 14 hours, 18 minutes- 18 minutes longer than assumed necessary in the SAFER Response Plans. This is the time determined for delivery to the regional airport near the site and does not include movement to the offsite staging area or delivery to the site…”

“The first tier of the SAFER plan is established through PEICo contracts with commercial heavy-lift helicopter vendors for “first call out of services.” With this type of contract, the vendors are not obligated to support SAFER’s response, and helicopter availability is dependent on the utilization and deployment location of the vendor’s fleet of helicopters at the time the request is made. For this reason, SAFER has contracted with multiple vendors and has committed to maintain and annually update the list of vendors that can provide the needed capability. The NRC staff questioned SAFER regarding the location of the helicopter vendors, number and operating areas of the helicopters, and the likelihood of availability of the contracted helicopters. SAFER provided additional information regarding the location and fleet sizes of five commercial helicopter vendors, with which they have, or are in the process of executing contracts…” [So, they are going to spend all their time calling “vendors” who may refuse them in an emergency if someone else pays more or may not be available. And, so they will count on the State and Federal government to do what SAFER’s supposed to do! In an emergency the State and Federal government might be unavailable.]

The third tier of helicopter support is for the site to request Federal helicopter resources…” [This all loses precious time and sounds planned to be goofy!]

“In summary, while no single helicopter vendor, or any one tier of the SAFER plan for requesting helicopter support is individually assured of providing helicopter resources to support 24-hour delivery time of SAFER equipment, SAFER … approach of having multiple vendors and multiple tiers…”
[The State and Federal government’s aren’t vendors! Are they “tiers”?]

[The pumps can’t pump saltwater so they will just put a little note?]
“The NRC staff reviewed the ETRD with regard to the design criteria for the HP/LF Pump, SG/RPV Makeup Pump, LP/MF Pump, LP/HF Pump, and the mechanical connections and associated hoses. During its audit, the NRC staff sought clarification from SAFER regarding the ability of the HP/LF pump to take suction from a salt or brackish water source. This pump is constructed of materials suitable for deionized or borated water sources. SAFER stated, and AREVA updated the ETRD (in Revision 11) to notify licensees, that “It is not intended for this pump to be used with salt/brackish water suction source. The unit will pump saltwater and suction strainers are provided[;] however, saltwater has not been evaluated to determine if any performance degradation will occur over time.” By inclusion of this note, licensees are informed of this potential limitation on the use of this equipment and can plan for the limitation in the site-specific Integrated Plans…”

[AREVA – SAFER expected sites to supply fuel!]
“During its audit, the NRC staff sought clarification from SAFER regarding diesel fuel oil supplies for Phase 3 equipment. Specifically, the staff sought clarification on who would be responsible for providing fuel for Phase 3 equipment and the ability of the Phase 3 equipment to run on a variety of fuel oil sulfur levels (e.g., low-sulfur versus ultra-low-sulfur). SAFER stated that the sites are responsible for all fueling of Phase 2 and Phase 3 equipment. However, if the site is not accessible by land, SAFER will provide a 500-gallon fuel bladder that can be transported by helicopter with fuel. In the case where this fuel transfer would be needed, SAFER would continue to fly fuel into the site from the SAFER offsite staging area as long as needed…” http://pbadupws.nrc.gov/docs/ML1426/ML14265A107.pdf

They mention Katrina… Anyone in North America should be alarmed by these and more goofy stupidities.