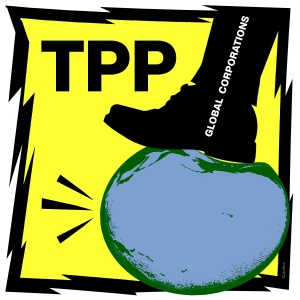 It has never been more clear that the US Federal government does little to protect the US public, and appears to do more harm than good. The problem is more than gridlock, as readers of this blog now know, if they never knew it before.

It has fallen to local and state governments to protect the people and if they are corrupted and unwilling, or unable, then the people are in trouble. The TPP would apparently undermine the ability of state and local governments to protect citizens. No one knows for certain, because few are allowed to read it, and those who are, are not supposed to report upon the contents.

One of the most frightening things is that the TPP will allow Japan to dump its radioactive food on the US (and Australia, New Zealand and Canada), and reportedly there will be no labels to identify its origin as Japan. The US allows 15x more radiation in its food than Japan. Australia, New Zealand and Canada allow 10x more radiation in food. It’s clear where Japan’s radioactive food will be going.

This is probably why they have hired so many lobbyists for the TPP deal, with a particular focus on agriculture, according to “The Hill“: “Japan launches major blitz on trade, Apr 28, 2015.

“State laws and regulators are increasingly important as gridlock in Washington makes broad federal action on important issues an increasingly rare event. From environmental protection to civil rights to the minimum wage, the action is at the state level. Ironically, one thing that may get done soon in Washington is a trade agreement, the Trans-Pacific Partnership, which has the potential to undermine a wide range of state and local laws.

One provision of TPP would create an entirely separate system of justice: special tribunals to hear and decide claims by foreign investors that their corporate interests are being harmed by a nation that is part of the agreement. This Investor-State Dispute Settlement provision would allow large multinational corporations to sue a signatory country for actions taken by its federal, state or local elected or appointed officials that the foreign corporation claims hurt its bottom line.

This should give pause to all members of Congress, who will soon be asked to vote on fast-track negotiating authority to close the agreement. But it is particularly worrisome to those of us in states, such as New York, with robust laws that protect the public welfare — laws that could be undermined by the TPP and its dispute settlement provision.

To put this in real terms, consider a foreign corporation, located in a country that has signed on to TPP, and which has an investment interest in the Indian Point nuclear power facility in New York’s Westchester County. Under TPP, that corporate investor could seek damages from the United States, perhaps hundreds of millions of dollars or more, for actions by the Nuclear Regulatory Commission, the New York State Department of Environmental Conservation, the Westchester Country Board of Legislators or even the local Village Board that lead to a delay in the relicensing or an increase in the operating costs of the facility.

The very threat of having to face such a suit in the uncharted waters of an international tribunal could have a chilling effect on government policymakers and regulators.
[…]
The separate and unaccountable system of justice that TPP would create poses a major risk to critical statutes and policy decisions that protect our citizens — and it has no place in a nation committed to equal justice under law.”
Read the entire Op-Ed piece here: http://ag.ny.gov/press-release/op-ed-don’t-let-tpp-gut-state-laws (Op-Ed also Published In Politico; Emphasis our own.)

The above nightmare scenario is already playing out in Germany where Swedish owned Vattenfall is suing Germany in a secretive tribunal for 4.7 billion euros, i.e. over 5 billion dollars.
https://miningawareness.wordpress.com/2014/10/17/swedish-government-nuclear-shakedown-of-germany-dumping-swedish-nuclear-waste-on-the-usa/
https://miningawareness.wordpress.com/2014/12/26/swedish-nuclear-hypocrisy-state-owned-vattenfall-is-still-suing-germany-for-4-7-billion-euros-for-closing-old-nuclear-reactors/
The US NRC is examining the possibility of increased foreign ownership of US Nuclear Reactors. There is already foreign ownership of uranium mining and enrichment.
https://miningawareness.wordpress.com/2015/05/28/nrc-caves-on-foreign-ownership-and-why-you-shouldnt-expect-it-to-value-human-life-like-other-federal-agencies/ 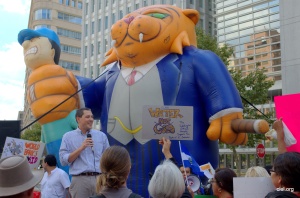 Senator Barbara Boxer has made similar observations to Attorney General Schneiderman regarding TPP:
“If the legacy of NAFTA isn’t enough to convince me, there is an entire new legal framework that would allow corporations to sue if they don’t like our national and state labor laws or environmental laws.

Here’s how it works: If a big polluter fears its interests or its profits are at risk because of a law or regulation, it could use this separate legal system – called Investor-State Dispute Settlement, or ISDS – to sue for unlimited money damages.

Just think of what this could mean for our country:

Polluters could use it to try to undo the incredible work my home state of California has done on climate change by passing AB 32, which has put the state on track to cut carbon pollution by 80 percent by 2050.

Polluters could seek to undermine the President’s Clean Power Plan, which would reduce air pollution from our biggest source power plants.

Polluters could undercut efforts to provide new protections to ensure the safety of our drinking water supplies.

Polluters could put pressure to scale back efforts to reduce toxic mercury pollution under the Mercury and Air Toxics Standards.

How do we know this could happen? Because we’ve seen special interests do it in the past.

S.D. Myers, a U.S. waste treatment company, challenged a Canadian ban on exports of PCBs. The claim was upheld and the tribunal order Canada to pay the company $5.6 million.

The Renco Group, a private corporation headquartered in New York, notified Peru in 2010 that it intended to launch an $800 million investor-state claim against the government. Renco has argues that Peru had violated the U.S.-Peru FTA by not granting the company a third extension on its overdue commitment to install pollution abatement equipment in a metal smelter it owned in La Oroya, Peru – one of the world’s most polluted sites. The case is still pending.

The very threat of such polluter lawsuits could chill efforts to reduce the threat of toxic chemicals or cut air and water pollution. And it could turn our longstanding environmental principle of “Polluter Pays” into “Polluters Get Paid.”
https://www.boxer.senate.gov/press/release/boxer-statement-on-fast-track-trade-legislation/ (Emphasis our own). See also:
http://www.boxer.senate.gov/press/video/boxer-speaks-out-against-fast-track-trade-legislation-1/

It’s worth repeating: The TPP will allow Japan to dump its radioactive food on the US (and Australia, New Zealand and Canada), and reportedly there will be no labels to identify its origin as Japan. The US allows 15x more radiation in its food than Japan. Australia, New Zealand and Canada allow 10x more radiation in food. It’s clear where Japan’s radioactive food will be going!How about the rule which says that catfish can only be American? It will be gone, if it’s not already.

Will the non-corrupted States sue the Federal Government?
Will Boxer or Schneiderman run for President?
One can but hope.