“This concerns an evaluation being performed by GE Hitachi Nuclear Energy (GEH) regarding a malfunction of a Scram Solenoid Pilot Valve (SSPV), which has been observed to impair control rod scram performance. As stated herein, GEH has not concluded that this is a reportable condition in accordance with the requirements of 10CFR 21.21(d). The SSPV manufacturer (ASCO Valve, Inc.) has not yet concluded its own investigation under 10CFR 21, and the results of that investigation are needed as input for the GEH evaluation. The manufacturer has issued an Interim Report, which provides confidence that this condition is limited to a very small portion of the suspect population.

“A malfunction of a Scram Solenoid Pilot Valve was attributed to the disengagement of the valve spring from the valve plunger. The effect of the malfunction is to degrade scram performance of an affected control rod. The safety significance of this condition cannot be determined at this time, but several mitigating and compensatory functions have been identified.”

All holders of operating licenses or construction permits for boiling water reactors (BWRs).

The U.S. Nuclear Regulatory Commission (NRC) is issuing this information notice to alert addressees to the potential failure of scram solenoid pilot valve diaphragms to function properly to the end of their recommended service life. It is expected that recipients will review the information for applicability to their facilities and consider actions, as appropriate, to avoid similar problems. However, suggestions contained in this information notice are not NRC requirements; therefore, no specific action or written response is required.

On March 26, 1994, a control rod failed to scram at Washington Nuclear Plant(WNP-2) during the routine 120-day test of 10 percent of the control rods. Testing was expanded to include all control rods and 5 more rods were identified as having slower than normal notch-45 scram times but were within technical specification limits.

On April 17, 1994, the licensee for Pilgrim Station discovered during routine scram time testing that a control rod exceeded the 7-second full insertion time limit. Several other rods, while within technical specification limits, had notably slower scram times than their previous baseline test data. Three rods were slow enough to cause their 2 by 2 arrays to exceed the technical specification limit. The licensee performed additional testing and, on April 22, 1994, shut down the plant to replace the pilot valve diaphragms for approximately 20 controlrods which had exhibited slow but acceptable scram times. The licensee found that the pilot valve diaphragms for five of these control rods were severely hardened. 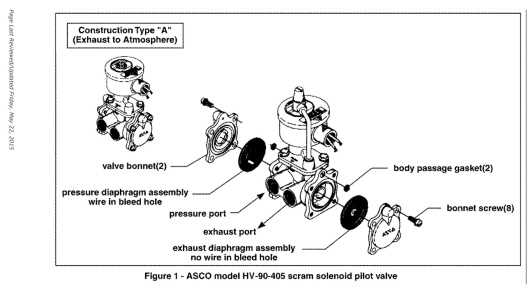 The pilot valve has one solenoid and, when the solenoid changes state, the exhaust and pressure diaphragms in each pilot valve flex to allow air to pass through internal pathways or block air from passing. In this way, the air operated scram valves are opened to cause a reactor scram and closed to reset the scram.

Two dual type valves are connected in series and installed at the top of each control rod hydraulic control unit. The upper pilot valve is designated as V-118 and the lower pilot valve is V-117. The location of the V-118 pilot valve, just above V-117, results in slightly higher temperatures for the V-118 valve because it receives some of the heat generated by the V-117 solenoid coil, as well as its own self-generated heat. The V-118 exhaust diaphragm is under the most stress when the system is in the normally energized state (no scram condition) because
there is system pressure on the upstream side and atmospheric pressure on the downstream side. The heat and stress combine to cause the V-11 exhaust diaphragm to generally age faster than the other three diaphragms.

The deterioration of the diaphragms at WNP-2 and Pilgrim was much more severe than what has normally been observed at the end of service life for these diaphragms.
This may indicate that the life expectancy of the diaphragms is less than the 7-year combined shelf and service life and the 3 to 4-year service life recommended by GENE. Although some diaphragms exhibited overall hardening, the diaphragms at both plants were found to be most severely hardened in areas that are normally in contact with system air (as opposed to areas that are in contact with metal valve surfaces). Any torsional or twisting force applied to the removed degraded diaphragms caused them to crack. According to the NSSS supplier, General Electric Nuclear Energy (GENE), a normal diaphragm at the end of service life tends to have only a slight loss of flexibility and is somewhat hardened all over, with no particular area harder than another.

The diaphragms installed at WNP-2 during the 1990 refueling outage were found to have assembly dates of 1983, 1987 and 1989. Material records from Pilgrim show that all of its scram solenoid pilot valves were rebuilt in June 1991 with kits assembled in either 1987 or 1990. For both plants, the diaphragms that exhibited severe degradation were from the 1989-1990 replacement kits. Analysis by several independent materials laboratories has indicated that the 1989-1990
diaphragms contained somewhat lower levels of nitrile along with indications of different concentrations of plasticizer and variations in the curing agents compared to diaphragms with an earlier assembly date. However, prior to 1993, there is no direct correlation between the actual cure date of the Buna-N components and the assembly date..

In addition to the above, residues were found on some of the degraded diaphragms where none would be expected, indicating that a chemical reaction with some contaminant could have contributed to the deterioration of the diaphragms. The origin of the contaminant is unknown at this time. The licensees involved stated that no chemical agent is used to clean the valve bodies or the Buna-N rubber components during the refurbishment process. The manufacturer (ASCO) indicated that no chemical cleaning agents are used during the assembly process and postulated that a contaminant may be introduced by the licensee air supply system.

In response to recent GENE communications, several licensees have submitted diaphragm samples to GENE for material analysis. Degradation has been observed in a small number of diaphragms from Dresden Station, Quad Cities Station, and Cooper Nuclear Station. However, other diaphragms from these sites, as well
as samples from Limerick Nuclear Generating Station and Duane Arnold Energy Center, have not shown signs of degradation.

Related Communications from GENE and the NRC

No. 069, Rev. 1, issued May 11, 1994, informed licensees that diaphragm kits or valve assemblies assembled after early 1989 may have a shorter service life than the 3 to 4 year service life recommended in earlier GENE communications.

GENE Services Information Letter (SIL) No. 575, issued October 27, 1993, discussed potential causes of slow control rod start of motion times. The SIL indicated that the combined shelf and service life of Buna-N components is 7 years and that the installed service life should be limited to approximately 4 years as recommended in earlier GENE communications.

NRC Bulletin 78-14, “Deterioration of Buna-N Components in ASCO Solenoids,” issued December 19, 1978, described an event at one licensee facility where a control rod was slow to scram because small pieces of the Buna-N disc in the scram solenoid pilot valve had wedged between the core assembly and the valve body, preventing movement of the core assembly. The NRC bulletin referenced SIL No. 128.

GENE SIL No. 128, Revision 1, issued January 30, 1976, and its supplement, SIL No. 128, Revision 1, Supplement 1, Revision 2, issued March 2, 1984, addressed deterioration of Buna-N components in scram solenoid pilot valves and recommended that these components be replaced at periodic intervals and that the diaphragms be replaced after 3 to 4 years of service. In addition, the SIL recommended that the work for any one outage be scheduled so that pilot valves are rebuilt in a distributed checkerboard pattern.

This information notice requires no specific action or written response. If you have any questions about the information in this notice, please contact one of the technical contacts listed below or the appropriate Office of Nuclear Reactor Regulation (NRR) project manager.
/S/’D BY BKGRIMES