Hilda Murrell wrote about this very topic of the nuclear industry’s “inbuilt tendency to dictatorship” and the UKAEA saying that “that local authorities must eventually agree to underground sites being used for the disposal of intermediate radioactive nuclear waste”. Her dead body was found 31 years ago today. 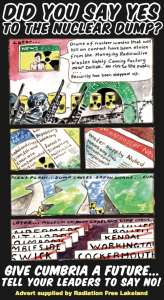 Radiation Free Lakeland and others are asking: Just whose idea was it to
plan to scrap democracy in order to dump nuclear wastes? Was the bright
idea given to Government by the PR firm Copper Consulting?

Copper Consultancy a PR firm with offices in London, Bristol, Suffolk and
most recently Cumbria, told the Department of Energy and Climate Change
that: “allowing local authorities to determine the outcome of a process
which is designed to deliver a national Government policy may not be the most appropriate route.”   This piece of work is a response to Cumbria County Council and the majority of Parish Council’s saying no to geological disposal of nuclear wastes.

In their blog Copper Consulting go on to say that: “local authorities are
consultees rather than decision makers. The final decision rests with the
Planning Inspectorate and the Secretary of State…