Over 20 years ago, the US government gave money to researchers to study the impact of long-lived radionuclides, which might leak from Russian nuclear waste in the Arctic. It was determined that sea stars could be bioindicators of 241 Americium. Grant Number N00014-93-1-1287: “This project is assessing the extent to which select species of seastars, brittle stars, and clams typical of the Kara Sea concentrate and retain a variety of long-lived radionuclides known to be (or suspected to be) present in the disposed wastes in the Russian Arctic…. The study we are conducting is examining the extent to which clams (Macoma balthica) and echinoderms such as seastars (dominant asteroids in the Kara Sea include Pontaster, Asterias, and Hymenasier) accumulate these radioisotopes and can be used as bioindicators of released radioactive wastes. Results of experiments thus far have indicated that M. balthica can accumulate diverse radionuclides from a wide variety of food sources; seven different algal species have thus far been examined. The assimilation efficiency of ingested radionuclides varies greatly among the radionuclides and less among the different foods for a given radionuclide…. have found significant transfer of 241 Am, some transfer of 57 Co and virtually no transfer of 137 Cs to the starfish… Results to date indicate that these organisms have unusually long biological half-lives for these radioisotopes (especially the transurnic element, americium), underscoring the likelihood that the echinoderms could be very effective bioindicators of any released radionuclides from the disposed radioactive wastes“[1]

Apparently studying Russian nuclear waste was more fun than examining nuclear waste dumped offshore from the US coasts. More recently, the grant recipient, along with another researcher (who wrote his dissertation on testing plutonium in the water from Chernobyl), have been interested in studying Caesium in the ocean from Fukushima, rather than Americium and Plutonium.

The US NOAA has this to say about sick Sea Stars: 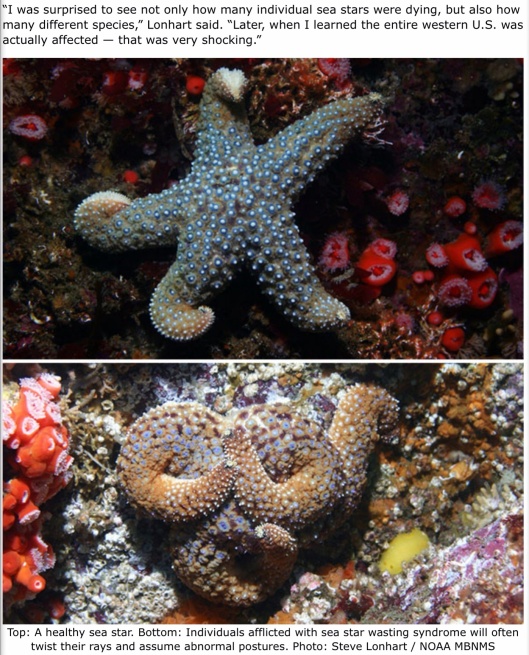 On July 31, 1989, Myron Levin of the LA Times published an article entitled “Old Nuclear Dump Off Coast Is a Relic of Era of Naivete in Toxic Disposal“. He informs us that for around a decade, starting in the early 1950s, radioactive waste from Atomics International (Rockwell International)’s Santa Susana Field Laboratory was dumped near Santa Cruz Island in Channel Islands National Park, along with military chemical waste. At the Santa Susana Lab: “At least four of the ten nuclear reactors suffered accidents. In July, 1959, the site suffered a partial nuclear meltdown that has been named ‘the worst in U.S. history’, releasing an undisclosed amount of radiation, but thought to be much more than the Three Mile Island disaster in 1979“. http://en.wikipedia.org/wiki/Santa_Susana_Field_Laboratory

Right now in the Channel Islands: “San Miguel Island Closure: In the interest of public safety, the U.S. Navy is closing San Miguel Island until further notice due to recent concerns of possible unexploded ordnance. San Miguel Island was an active bombing range from WWII through the 1970s. San Miguel Island is owned by the U.S. Department of Defense and is managed by the National Park Service under a memorandum of agreement.” http://www.nps.gov/chis/planyourvisit/conditions.htm

The Channel Islands are important for the now ailing California Sea lions. http://www.nps.gov/chis/planyourvisit/seal-and-sea-lion-viewing.htm 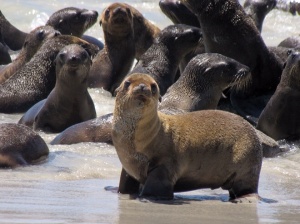 They were the earliest, or one of the earliest, locations of sea star wasting disease: “In the summer of 1997, we quantified the incidence of wasting disease among multiple species of sea stars through-out the Channel Islands and adjacent mainland areas. The disease has been observed since 1978 during warmer water periods.” (“Sea Star Disease and Population Declines at the Channel Islands“, by Ginny L. Eckert, John M. Engle, David J. Kushner http://www.mednscience.org/download_product/1611/0)

Plutonium 241 has a half life of 14 years, which is used to trick people since it becomes more dangerous 241 Americium with a half life of around 432 years: “Plutonium from reprocessed fuel is usually fabricated into MOX as soon as possible to avoid problems with the decay of short-lived isotopes of plutonium. In particular, 241 Pu decays to americium-241 (241 Am), which is a gamma ray emitter, giving rise to a potential occupational health hazard if the separated plutonium over five years old is used in a normal MOX plant… As a result old reactor-grade plutonium can be difficult to use in a MOX fuel plant, as the 241 Pu it contains decays with a short 14.1 year half-life into more radioactive 241 Am, which makes the fuel difficult to handle in a production plant. Within about 5 years typical reactor-grade plutonium would contain too much 241 Am (about 3%)” http://en.wikipedia.org/wiki/MOX_fuel#Americium_content

In 2012, Zeng et. al. reported on “the isotopic evidence for the release of Pu into the atmosphere and deposition on the ground in northwest and south of the Fukushima DNPP in the 20–30 km zones. The high activity ratio of 241Pu/239+240Pu (>100) from the Fukushima DNPP accident highlights the need for long-term 241Pu dose assessment, and the ingrowth of 241Am. The results are important for the estimation of reactor damage and have significant implication in the strategy of decontamination.” They furthermore note that “The relatively higher 241Pu/239+240Pu activity ratio of the Fukushima DNPP accident might be because of the damage to the Unit 3 reactor, which had a mixed core, containing both uranium fuel and mixed uranium and plutonium oxide (MOX) fuel; the latter was about 6% of the core fuel. The additional production of 241Pu from the 239Pu fuel may have enhanced the 241Pu/239+240Pu activity ratio and 241Pu/239Pu atom ratio inside the reactor during normal operation before the accident” (http://www.nature.com/srep/2012/120308/srep00304/pdf/srep00304.pdf Zheng, J. et al. “Isotopic evidence of plutonium release into the environment from the Fukushima DNPP accident. Sci. Rep. 2, 304; DOI:10.1038/srep00304 (2012))

Earlier this year, dead starfish (sea stars) washed up on the coast of Wales. In a February article in Wales online news: “Why were thousands of starfish washed up on a stretch of a Welsh beach?“, 2 February 2015 , by Sam Yarwood, Alistair Hemphill, a coastal ranger for Flintshire Council is quoted as having said about either this case or a similar case in Talacre in 2011, that they might have “lain dead in the sea for a long time. ‘Strong winds and bad weather have then washed them ashore“.

In “Monitoring our Environment: Discharges and Monitoring in the United Kingdom Annual Report 2012“, p. 17, one learns that, between 2008 and 2012 alone, Sellafield had legally spewed 13 trillion becquerels (TBq) into the Irish Sea by pipeline. This is significantly under the 125 trillion becquerels legally allowed. A becquerel is a radioactive disintegration-emission per second. (See bottom of our blog post for more details of emissions) The Irish Sea seems to be well washed by currents, and yet radionuclides have still worked their way back to the coast. However, some goes quickly and some more slowly with the currents.

The Pacific currents leading from Japan to the US west coast appear largely circular, as illustrated by the Pacific garbage patch.

[1] Given this research by Nicholas Fisher on Americium and Ken Buessler’s Ph.D. on plutonium testing, one would think that they would test for this at Fukushima. They apparently decided to test for Caesium, instead. The following was an important, taxpayer funded (seemingly DOD) research grant, which is apparently NOT being put to good use. 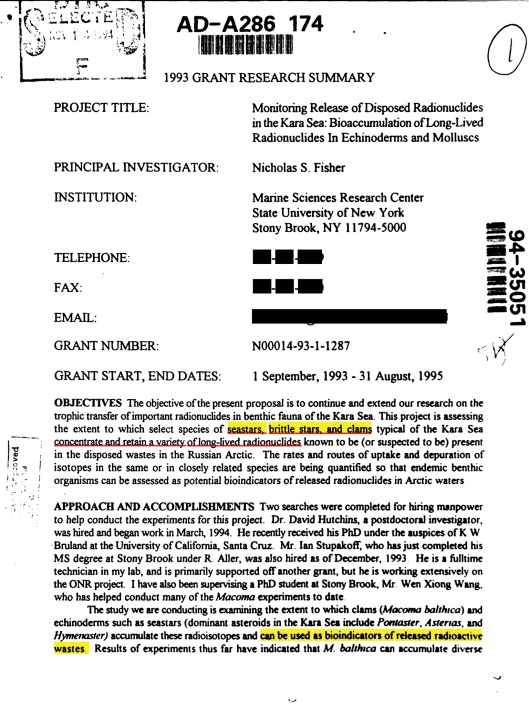 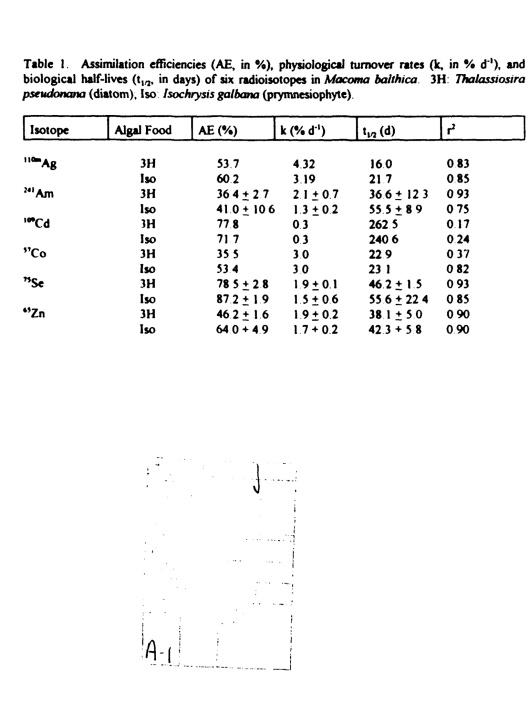 [2] From “Monitoring our Environment: Discharges and Monitoring in the United Kingdom Annual Report 2012“, p. 17 (Sellafield). 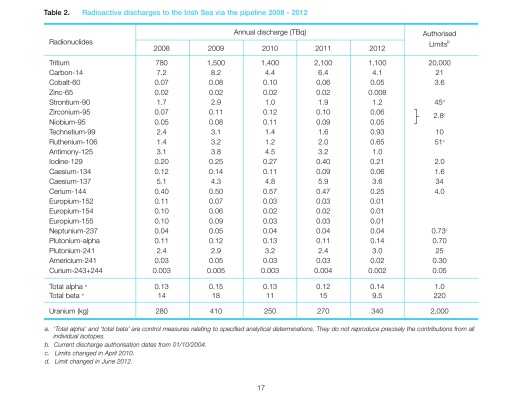 Macoma balthica clams may be used as a bioindicator for activation products like Cobalt 57: “Effects of Arctic Temperatures on Distribution and Retention of the Nuclear Waste Radionuclides 241Am, 57Co, and 137 Cs in the Bioindicator Bivalve Macoma balthica” David A. Hutchiqa, Ian Stupakoff, Sharon Hook, Samuel N. Luomab and Nicholas S. Fisher” Marine Environmental Research, Vol. 45, No. I, pp. 17-28, 1998 http://wwwrcamnl.wr.usgs.gov/tracel/references/pdf/MarEnvironRes_v45n1p17.pdf

Related, scroll to 7 July 2014 within https://miningawareness.wordpress.com/2014/06/12/radioactive-reindeer-nuclear-guinea-pigs-part-xi-of-a-series/