Deadline in around 24 hours (11.59 pm Mon. March 9th Washington DC-EDT/3.59 am Tuesday UTC) for comment regarding storage of corroded nuclear spent fuel rods and other safety related exemptions for dry cask storage, to be given to privately owned Holtec by the US NRC. Remember to make the comment uniquely your own, because they don’t count repeats. https://www.federalregister.gov/articles/2015/02/05/2015-02310/list-of-approved-spent-fuel-storage-casks-holtec-international-hi-storm-100-cask-system-certificate For Holtec-NRC discussion of what is damaged, breached, grossly breached, and amputated, but not broken spent nuclear fuel see: https://miningawareness.wordpress.com/2015/03/09/holtec-nrc-confusing-double-speak-damaged-spent-nuclear-fuel-comment-period-ends-today-11-59-pm-eastern-us-4-59-tues-utc/ Holtec has contracts all over the US and the World – at least 67: China, S. Korea, Sweden, Switzerland, Belgium, Spain, UK (Sizewell B) and in the Ukraine, including Chernobyl. They have been accused and fined for bribery-kickbacks by the US Government. Holtec wants exemptions to store “damaged”, corroded, nuclear fuel rods in their dry casks and some other safety related exemptions. The US NRC will grant it, if there is not enough uproar. US NRC workers in Emergency Preparedness Exercise (2008, NRC). The guy in the gold shirt looks perplexed. Only two or three look serious. Some look like they are goofing off. Is this the problem? 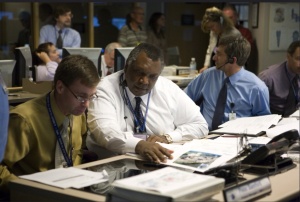 Holtec Dry Casks, as they looked a decade ago at Diablo Canyon, NRC photos. 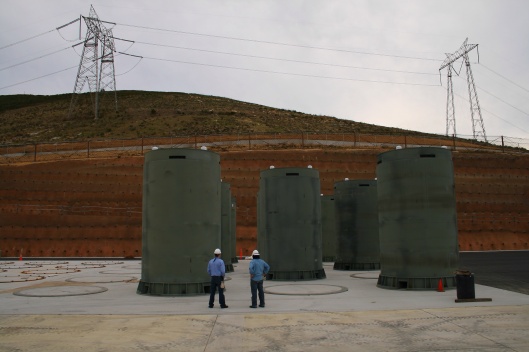 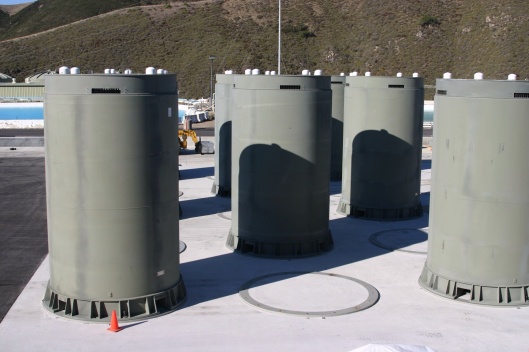 It is just like General Honore recently said about the Louisiana legislature giving exemptions and exceptions to the clean air and water act for the oil industry, (see approx. 21 min http://youtu.be/taXaWOcpfZI), except that this is nation-wide and high level nuclear waste. At the minimum, this means that the spent fuel casks will be stuck in place with corroded, damaged, fuel, because they can’t safely be moved, although it is certain that Holtec will ask for an exemption for moving the casks and get it, unless people start lawyering up and suing now. While we encourage you to comment for the record, we are almost certain that this is going to take legal action. There is something far stinkier, and certainly more dangerous, than Watergate, which needs to be brought to the light. We can’t tell you if the cause is sheer stupidity or something else. But, it is, in our opinion, worth noting that Holtec was fined by the US government for apparent bribery-kickbacks. However, we find it difficult to believe that NRC workers would endanger their own lives and those of their loved ones with broken nuclear fuel rods in casks, for a bribe-kickback, especially one as small as Holtec is alleged to have given. The sheer rottenness of the US NRC is thus difficult to explain. The CEO, President, Founder and presumed owner of Holtec, Kris Singh, can return to India. Thus, his not caring about the health and safety of Americans, and of the North American environment, should be less surprising. He may also not be too bright – we add this only to give him the benefit of the doubt. Or he’s evil, or he’s not so bright. Is there even evidence of his degree from a university in India? Has anyone checked? He would not be the only foreign national to fake a degree and get by with it. This would have been even easier to do when he came to America. Holtec is active all over the world, even having been given a contract for Chernobyl. If this weakened standard goes through, it will probably have international repercussions. It will be said to adhere to US standards, with no mention of the exceptions-exemptions. When reading the information given at the link, it is worth noting that all or almost all US Commercial Nuclear reactors are Light Water Reactors running off of low enriched (LEU) fuel. Around 1/3rd are non-pressurized (BWR); 2/3rds pressurized (PWR). From our recollection they don’t even want to check if the fuel rods are broken or the general state of the fuel rods, which is one reason they want to run this exemption through for costs. If you think that the NRC info is unclear, you would be right. Already the NRC is in violation of the rule stating that language should be clear and understandable. It is impossible to say if this is by design or by illiteracy. While these are complex topics, they have made them needlessly murky. 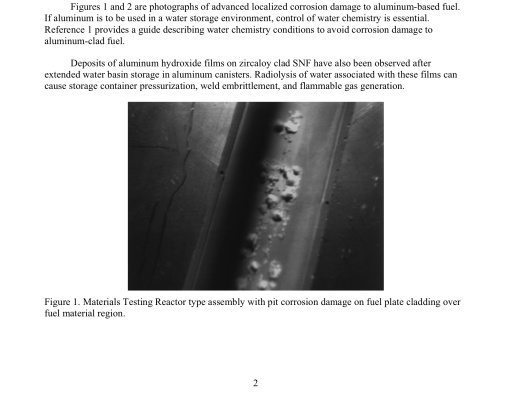