“Der alt böse Feind…Und wenn die Welt voll Teufel wär…” (Martin Luther, 1529)
[The old evil enemy… And when this world with Devils filled…]
“For still our ancient foe, doth seek to work us woe; his craft and power are great, and armed with cruel hate, on earth is not his equal… 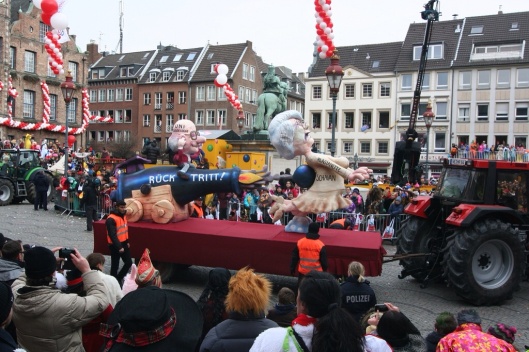 “And though this world, with devils filled, should threaten to undo us, we will not fear, for God hath willed his truth to triumph through us. The Prince of Darkness grim, we tremble not for him; his rage we can endure, for lo, his doom is sure; one little word shall fell him.” Martin Luther: A Mighty Fortress is Our God, 1529, Frederick Hedge transl, 1852

Who was the evil German person behind asking the treasonous US official, Tom D’Agostino, in February 2012, to take High Level German Nuclear waste off of Germany’s hands? Well, according to the the US Federal Register, that would be State Secretary of the Federal Ministry of Education and Research of the Federal Republic of Germany. Who was head of the Ministry of Education and Research at the time? Annette Schavan, of the German so-called “Christian Democrat” Party, the apparent “brain” behind dumping German nuclear waste on the poor in the USA: https://miningawareness.wordpress.com/2014/05/08/germany-to-dump-high-level-radioactive-waste-on-the-poor-african-americans-savannah-river-site-usa/

Once, “Dr.”, Annette Schavan had HER DOCTORATE REVOKED by the University of Düsseldorf for alleged plagiarism. She was Federal Minister of Education and Research from 2005 to 2013. She resigned following the revocation of her doctorate due to apparent plagiarism. http://en.wikipedia.org/wiki/Federal_Ministry_of_Education_and_Research_%28Germany%29

Whether or not she plagiarized doesn’t matter so much as that she clearly learned nothing about her dissertation topic: “Character and conscience — Studies on the conditions, necessities, and demands on the development of conscience in the present day.“ http://en.wikipedia.org/wiki/Annette_Schavan

And, she has a book called: “Gott ist größer, als wir glauben : Visionen für Kirche und Welt“, by Annette Schavan, Leipzig : Benno, 2010. She needs to change the title to “the Devil is bigger than we think: Schavan’s vision of dumping nuclear waste on the poor”.

She’s a horrible hypocrite. She wanted more nuclear reactors for Germany, but to dump the waste on South Carolina, USA! Schavan was long a proponent of nuclear power. In 2000, the Red-Green Cabinet Schröder I had decided on a nuclear phase-out; Mid-2008 Schavan announced continuing to push forward nuclear research and in the following years gave 45 million euros for this. After a series of incidents in German nuclear power plants, nuclear energy became a big issue. Schavan said, before the 2009 election, that nuclear power should not be demonized! Schavan commissioned a ministry report by 100 researchers about building new nuclear power plants in Germany and to search for other sites, besides Gorleben, for nuclear waste. (Is South Carolina the other site they found?) http://de.wikipedia.org/wiki/Annette_Schavan https://web.archive.org/web/20121217045517/http://www.ftd.de/politik/deutschland/:brisantes-gutachten-schavan-haelt-atomstudie-zurueck/50010078.html

Tom D’Agostino now works at Fluor, operator of the SRS site, suggesting that there may be something in this crime for them and suggesting that this was his reward for selling out his country (assuming his country is still the USA and not the EU-Italy). The head of the US DOE, Moniz, who probably also has access to secondary and tertiary citizenship, wants the US taxpayer to pay $1.9 billion, in 2016, to dump waste on itself! They call it nonproliferation, but it’s really dumping the world’s nuclear waste on poor Americans, even though the US has no place to put its own nuclear waste and the US government is being sued by both some US states and utilities, because there is no place for US nuclear waste to go. http://www.energy.gov/articles/energy-department-presents-fy16-budget-request The US has taken or is taking nuclear waste from countries like Canada, Sweden, and Italy, which are generally not classified as “terrorist” states!

The clearest evidence of Annette Schavan’s plagiarism is that her dissertation was supposed to be on conscience, apparently ethics, which she clearly has none of. It was under Schavan’s watch as Federal Minister of Education and Research, in 2012, that Germany had the balls to ask the US to take its nuclear waste balls. She is pronuclear but wants to then dump the nuclear waste on non-Germans – evil, nasty, woman. Schavan is a German National Chauvinist! Lacking the balls herself, she seems to have gotten a lackey underling, Dr. Georg Schuette, to negotiate and send the letter. We believe her to be the true culprit, because appointed by her, he only serves at her grace and that of Merkel; the party line; i.e. if he does not obey, he would be put into early retirement. In short, if Dr. Schuette had any ethics at all, Schavan and Merkel most likely would have gotten shut of him. We won’t be rude enough to say what they have him by! This evil woman was appointed German Ambassador to the Vatican last July! In other words Der alt böse Feind, the devil and minions is hanging out big time in the German “Christian Democratic” Party, and now even at the Vatican! An exorcism is in order. Or, ink-wells, in good Luther style? It is unclear if we should pity Germany or simply the Vatican on this one. At least Germany is shut of Schavan for now, though it is an extreme embarrassment. They are not yet shut of Schuette.

We had delayed this post, hoping that the Pope would revoke her Ambassadorship, to go with her doctorate, and shove Schavan back north. But, she appears to still be there.

Additional information:
“In a February 2012 letter, the State Secretary of the Federal Ministry of Education and Research of the Federal Republic of Germany requested DOE’s Under Secretary for Nuclear Security to DOE consider accepting the fuel. The Office of Environmental Management responded on behalf of the Under Secretary that DOE would consider the request. Collaboration on the request was initiated in May 2012.” Federal Register / Vol. 79, No. 107 / Wednesday, June 4, 2014 / Notices 32256, 32257 https://www.federalregister.gov/articles/2014/06/04/2014-12933/environmental-assessment-for-the-acceptance-and-disposition-of-used-nuclear-fuel-containing

“Annette Schavan (born 10 June 1955) is a German politician (CDU). She was the Federal Minister of Education and Research from 2005 to 2013, when she resigned following the revocation of her doctorate due to plagiarism…. In 2012, a blogger with the pseudonym Robert Schmidt who is a member of the research-network VroniPlag Wiki alleged he had found plagiarism in Schavan’s PhD thesis,[2] entitled “Character and conscience — Studies on the conditions, necessities, and demands on the development of conscience in the present day.”[3][4] The University of Düsseldorf conducted an investigation into the plagiarism charge. Investigators found paraphrasing of secondary literature without naming the source in over 60 cases in the dissertation and thereby on 5 February 2013 revoked her doctorate degree because of “systematic and premeditated” deception.[5][6]

On 9 February 2013, it was announced that Annette Schavan had offered to resign as minister, which was accepted by chancellor Angela Merkel. Schavan has denied any wrongdoing and indicated she would take legal action against the university.[7]” http://en.wikipedia.org/wiki/Annette_Schavan

For updates and about the German Greens trying to stop the nuclear waste from being move: http://www.srswatch.org