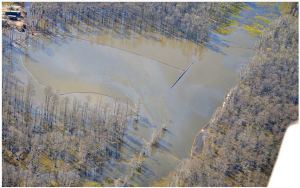 (NOTE TO RETURNING READERS, THE UPDATE REBUTTAL IS HIGHLIGHTED IN BOLD LETTERS BELOW)

A truly shocking revelation has been uncovered in SONRIS files concerning the fragile and ‘too close to salt edge’, Occidental Geismar #1, as well as four other caverns on the east side of Grand Bayou.

Last week, it was revealed that Oxy #1 was found to be in potential jeopardy and possible collapse since it lies within 1-200 ft. from the Salt Dome’s edge.

Although no real shock to those in the know, what else was found regarding Occidental-Geismar #1 Cavern, turned out to be a real electrifying revelation.