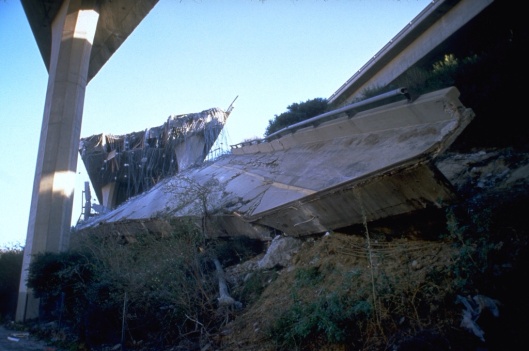 “Photo by FEMA News Photo – Jan 16, 1994
Northridge Earthquake, Calif., January 17, 1994 -Many roads, including bridges and elevated highways were damaged by the 6.7 magnitude earthquake. Approximately 114,000 residential and commercial structures were damaged and 72 deaths were attributed to the earthquake. Damage costs were estimated at $25 billion. FEMA News Photo – Location: Northridge Earthquake, CA”

Several months ago, the US NRC approved its so-called “waste confidence” rule, which allows nuclear reactors to continue to produce radioactive waste and leave it on site, in spent fuel pools, since there is no place to put it – no one wants it. Spent fuel pools, like swimming pools, undergo seiche in earthquakes, which could effect water level even without physical damage.

For this ruling the NRC ignored increased earthquake hazards at nuclear sites on the West Coast (see below). They are also giving the nuclear reactor operators on the West Coast until next March (2015) to turn in a “risk screening report”, on what used to be called the “honor system”, for an industry which has no honor. (see below) And one can but wonder why the US NRC exists? Unlike other federal agencies, the NRC appears over-staffed. The USGS has also made a very good and easy to read map showing that risk has increased significantly for the California and Washington State reactors.

This USGS map shows that earthquake hazard was found to be almost double in 2008, compared to 2002. This map wasn’t difficult to find. It isn’t difficult to read. The NRC has lots of people working there. There have been updates in some places since 2008. Understanding of earthquake hazard is ever-evolving. We put arrows approximately where Diablo Canyon and San Onofre are located. San Onofre is undergoing decommissioning but spent fuel will stay on site, in spent fuel pools and then dry cask storage, of questionable resilience.

Here’s where the NRC essentially says that they can’t be bothered.

Foot-dragging and Nuclear “Honor System”
“On March 12, 2012, the NRC issued a request for information pursuant to Title 10 of the Code of Federal Regulations, Part 50 (1 0 CFR), Section 50.54(f) (hereafter referred to as the 50.54(f) letter. The purpose of the 50.54(f) letter was to gather information concerning, in part, the seismic hazard at operating reactor sites to enable the NRC staff to determine whether licenses should be modified, suspended, or revoked. The ‘Required Response’section of Enclosure 1 indicated that licensees should provide a seismic hazard evaluation and screening report within 1.5 years from the date of the letter for central and eastern United States (CEUS) nuclear power plants, and within 3 years for western United States (WUS) plants. For CEUS plants, the date to submit the report was extended by the NRC to March 31, 2014…” According to a footnote: “Seismic risk evaluation screening reports for Columbia Generating Station, Diablo Canyon Power Plant, and Palo Verde Nuclear Generating Station are due by March 12, 2015.” 10 Dec. 2014: http://pbadupws.nrc.gov/docs/ML1430/ML14307B707.pdf

Even for the new spent fuel pool instrumentation required post-Fukushima, the NRC appears to be allowing up until 31 December 2016 for implementation. In March of 2012 they stated 2 fuel cycles or 31 December 2016 – which ever comes first. Fuel cycles are on average one year to 18 months, meaning 2 to 3 years: http://pbadupws.nrc.gov/docs/ML1205/ML12054A679.pdf

USGS details re Northridge:
“JAN 1994
17 12:30:55.3& 34.213 -118.537 18 6.4 6.8 696 SOUTHERN CALIFORNIA.
. Mw 6.7 (GS), 6.7 (HRV), 6.7 (PAS). ML 6.7 (BRK).
Mo=1.2*10**19 Nm (BRK). Mo=1.2*10**19 Nm (GS). Mo=1.2*10**19 Nm
(HRV). Mo=3.6*10**19 Nm (PPT). Sixty people were killed, more than 7,000 injured, 20,000 homeless and more than 40,000 buildings damaged in Los Angeles, Ventura, Orange and San
Bernardino Counties. Severe damage occurred in the San Fernando Valley: maximum intensities of (IX) were observed in and near Northridge and in Sherman Oaks. Lesser, but still significant damage occurred at Fillmore, Glendale, Santa Clarita, Santa Monica, Simi Valley and in western and central Los Angeles. Damage was also sustained to Anaheim Stadium. Collapsed overpasses closed sections of the Santa Monica Freeway, the Antelope Valley Freeway, the Simi Valley Freeway and the Golden State Freeway. Fires caused additional damage in the San Fernando Valley and at Malibu and Venice. Preliminary estimates of damage are between 13 and 20 billion U.S. dollars. Felt throughout much of southern California and as far away as Turlock, California; Las Vegas, Nevada; Richfield, Utah and Ensenada, Mexico. The maximum recorded acceleration exceeded 1.0g at several sites in the area with the largest value of 1.8g recorded at Tarzana, about 7 km south of the epicenter. A maximum uplift of about 15 cm occurred in the Santa Susana Mountains and many rockslides occurred in mountain areas, blocking some roads. Some ground cracks were observed at Granada Hills and in Potrero Canyon. Some liquefaction occurred at Simi Valley and in some other parts of the Los Angeles Basin.” http://earthquake.usgs.gov/earthquakes/eqarchives/significant/sig_1994.php