This shows some of the many contractors and subcontractors on the EDF Flamanville new nuclear construction site. EDF (84.4%) and Areva (89.9%) are almost fully owned by the French State and are managed by the “Agence des participations de l’État (APE)“. http://en.wikipedia.org/wiki/Government-owned_corporation

GDF-Suez is approximately 1/3rd French State owned, making it like a half-sibling to the EDF-Areva French state owned nuclear twins. The proposed new “Moorside” nuclear reactor near, but certainly not next door, to Sellafield, would be built by the “NuGeneration” consortium which is 60% Toshiba owned (through its Westinghouse subsidiary) and 40% GDF-Suez owned.

This is the bucolic site of the proposed new nuclear reactors at Moorside in Cumbria. Note the cows with the Irish Sea in the background. 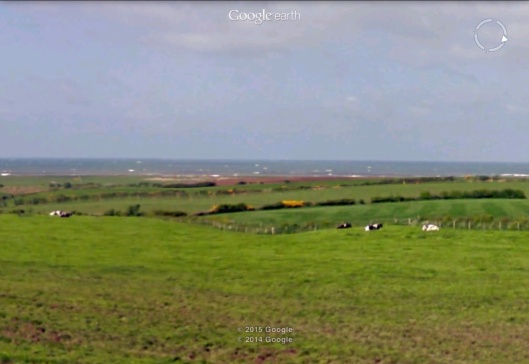 http://en.wikipedia.org/wiki/Moorside_nuclear_power_station
This nuclear project is very obviously neither needed by the cows, nor by the people, of this largely rural area.

One big reason that building new nuclear reactors is popular is that they are large government and/or rate-payer subsidized construction projects and everyone thinks that they are going to be pigs at the trough. Some contractor pigs will leave overly fattened, but some subcontractors could leave not only empty handed but robbed, it seems.

While most know that the crazy cost overruns of new nuclear reactors have been, in the past, and will be, in the future, paid for by the taxpayer and/or ratepayers, who will be taken to the cleaners, some businesses could end up losing money too.

How so? It’s kind of hard to figure out, but it apparently just happened to a Scottish company who spent millions digging a trench for the Dutch subsidiary of GDF-Suez and who apparently was not paid for the work! It surely cost them money to do the work, meaning that they lost money both directly and indirectly.

The problem is that there was what used to be called a “middleman” and now seems to fall under the category of contractors or subcontractors. The middleman in this case was Cecon ASA of Norway’s subsidiary CECON NL BV, which claims to be a “Global Offshore and Subsea Installation Contractor”. The main, or one of the main investors, is YORK CAPITAL MANAGEMENT GLOBAL ADVISORS, LLC http://www.adviserinfo.sec.gov/IAPD/Firm/140336, although it’s not clear if they moved in only after the company was in financial trouble. There are several Cecons, which may or many not be related to this Norwegian-Dutch entity. Still, who would work with a company named “Cecon” without checking them out, especially offshore? Sea con? One of the board members actually has the surname of “Lie”. Although it may be from the French “lier” to tie or bind, that’s not much better. Tied to a sea con? At any rate, the unpaid company, “Canyon Offshore Ltd” seems like a legitimate company, whereas Cecon ASA Norway is undergoing debt restructuring. Canyon operates from, and is registered, in Scotland and does real work of various sorts. That raises the question of why GDF-Suez hired Cecon NL BV as a middleman who then hired Canyon? Why didn’t they hire Canyon directly?

As this case works its way through the courts, answers will likely be had. One can only wonder if GDF-Suez paid Cecon who failed to pay Canyon? Or, did GDF-Suez fail to pay Cecon who in turn was unable to pay Canyon? All that seems clear is that Canyon got screwed out of millions of euros and GDF-Suez have even been argumentative about where the case would be heard!

This raises the question of if local contractors will get screwed during the construction of the proposed GDF-Suez new reactor at Moorside?

Each layer of subcontractors is actually one more layer of rate-payer/tax-payer rip off and that much less the subcontractor gets, as each layer takes profit. So, subcontracting is already a con-game in and of itself.

GDF-Suez’ arguing about which court the case should be heard in, makes it appear that GDF-Suez really is not on the up and up. If GDF-Suez were on the up and up, wouldn’t they be cooperative and try to settle this affair outside of court? Note that this is the Dutch registered subsidiary of France’s GDF-Suez and the Dutch subsidiary of Cecon, which is also registered in Norway.

Here is an extract from the Canyon Offshore vs. GDF-Suez case:
“3. The Claimant (“Canyon”) is a Scottish company with its registered office in Aberdeen. The Defendant applicant (“GDF”), a Dutch company, is a large owner and operator of oil and gas fields. In particular, GDF operates wells in the Dutch sector of the Orca, Sierra and Amstel fields in the North Sea.

4. GDF wished to develop further those fields by the erection of additional platforms, which in turn required the installation of subsea pipelines. On 4 September 2012 GDF entered into three contracts in materially the same form, with Cecon NL BV (“Cecon”), another Dutch company, for the transportation and installation of these pipelines (“the Project Agreements”). Each Agreement is expressly subject to Dutch law and jurisdiction. The Project Agreements permitted Cecon to sub-contract its work and provided for the costs of sub-contractors, “…to be reimbursed to [Cecon] by [GDF] on a cost plus basis, i.e. cost plus ten (10) per cent….”

5. Cecon sub-contracted part of the work to Canyon under an agreement dated 1 July 2013 (“The Trenching Contract”). Article 39 of the Trenching Contract provides that it is governed by English law and subject to arbitration in Rotterdam. The only other provisions relevant to this application are Clause 3 of section 1 that Cecon “shall pay to [Canyon] the Price” and Article 15 of section 2 which deals with time of payment.

6. In about November 2013, Cecon fell behind in its payment obligations to its sub-contractors, including Canyon. Canyon had done work and issued invoices. Each invoice stipulated that payment was to be made by wire transfer to Canyon’s Bank of America account in London or by mail payment to Canyon’s address in Aberdeen. GDF was concerned that these payment difficulties would have an impact on the project if sub-contractors were to cease work due to non-payment. So GDF made the proposal set out in a letter addressed to Cecon of 16 January 2014 (“the Letter”) the relevant parts of which read as follows. The Letter must of course be read as a whole and in context.
“Further to our meeting of today we herewith inform you as follows.
We understand that certain sub-contractors contracted by Cecon NL B.V. (“Cecon”) and engaged in the execution of the work for the transport and installation of the pipelines (“projects”) as referred to above have been left unpaid for a substantial period of time. This has resulted in a large backlog of outstanding invoices. We also understand that Cecon is not in the position to fulfil its payment obligations under the respective sub-contracts. The above situation is causing a threat to the projects considering that these sub-contractors may suspend their services any time now they have not been paid by Cecon. If these sub-contractors would stop their activities this could lead to a delay and an increase of costs. Although GDF SUEZ E&P Nederland B.V. (“GDF SUEZ”) is not obliged in any way or form to take over this payment obligation, in order to mitigate cost and potential damages GDF SUEZ sees no other option than to, on behalf of Cecon, pay the relevant sub-contractors directly. GDF SUEZ is only prepared to pay the relevant sub-contractors based on the following conditions:
The amount of the invoices is undisputed and approved for payment by Cecon;
The invoices are not related to the operation of the Pipelay Vessel ‘Lewek Centurion’ except for the works done by sub-contractor CRC-EVANS Ltd;
The invoices are not subject to any variation order, already in process by GDF SUEZ; The invoices are not subject to any future variation order; The relevant invoice is not disputed by GDF SUEZ. Please note that payments made by GDF Suez to the relevant sub-contractors shall discharge GDF SUEZ from any payment obligation towards Cecon (in Dutch; “bevrijdende betaling”) under the agreements referred to above for that same amount. GDF SUEZ shall not take over the contractual position of Cecon under the relevant sub-contract and this letter should therefore not be interpreted in such way that this could be assumed. Cecon shall ensure and document that any and all payments done by GDF SUEZ shall discharge Cecon from its payment obligation towards the relevant sub-contractor.
This arrangement shall apply to invoices from sub-contractors that have been left unpaid until the date of this letter, provided that the conditions reflected above are being met.
Upon receipt of this letter counter signed by Cecon, the agreement set out in this letter will come into force….”

7. There was a meeting between Canyon and Cecon on 17 January 2014. The evidence about the meeting from Ms Woodward Quail, on instructions, is that Cecon, mainly through Mr Stinenbosch told Canyon that Cecon had met GDF on 15 January 2014 (that is consistent with the terms of the Letter). Cecon told Canyon that GDF “had given a commitment” that GDF would pay the sub-contractors’ invoices to ensure that the sub-contractors did not suspend performance. As a result Mr McIntosh of Canyon, “was in no doubt that the agreement was that GDF would pay Canyon directly, if Canyon kept on working.” The evidence (see paragraph 32(3)) suggests that Canyon understood, although it is unclear whether that was from what it was told or simply from inference, that future as well as past invoices would be covered. Further, it is said that Mr McIntosh understood that GDF had authorised Cecon to pass on a contractual offer to Canyon. GDF responds in general terms stating that it did not agree that Cecon could act as GDF’s agent or hold out Cecon to Canyon as GDF’s agent. There is a dispute between the parties as to whether Cecon accepted the offer before GDF told Cecon that it had withdrawn it. The Court cannot resolve these factual issues on this application.

8. Canyon says that it relied on the Letter and what was said at the 17 January 2014 meeting and decided to carry on working until the job was completed at the end of January.

10. Canyon also claims that at a meeting on 17 January 2014 between representatives of Cecon and Canyon, GDF, acting through the agency of Cecon, “offered, once such invoices were approved by Cecon, to pay to Canyon sums invoiced by Canyon to Cecon, in respect of invoices to be rendered in relation to the continuation of the work then being performed by Canyon’s vessel, the “GRAND CANYON”” (paragraph 8(5)). Canyon says that it accepted these offers (paragraph 8(8)).

11. Canyon claims, based on the commitment given at the meeting, some £3.4m from GDF for work carried out after 16 January 2014.