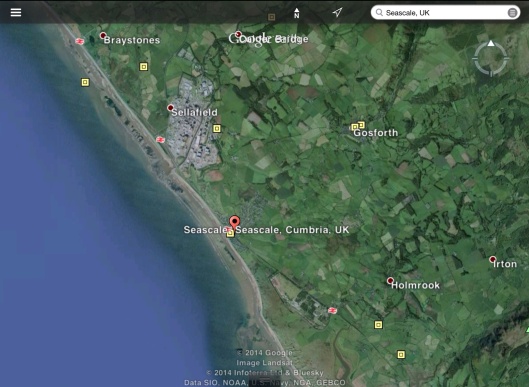 While trying to find out if UK secret documents on the murder of anti-nuclear activist Hilda Murrell have been declassified, we found the following. Of course they haven’t bothered to digitize this but it can be ordered or seen in one, possibly two, locations in the UK:
“Report on leak at Windscale: policy towards Sellafield; environmental pollution; report on incidence of cancer in west Cumbria; report of the Committee on Medical Aspects of Radiation in the Environment; part 1

Patrick Jenkin suggests a ‘Sellafield dimension’ to Government policies where financial compensation would be given to areas near nuclear plants, such as the Workington Enterprise Zone. This is rejected by David Pascall of the Policy Unit (01/06/84).

The Black Report published in July 1984 causes concern as it looks at leukaemia among young people in Seascale, near Sellafield (17/07/84).

Correspondence between Thatcher and the Taoiseach, Garret Fitzgerald in March 1986 demonstrates Irish concerns over the safety of Sellafield.

Advisor Michael Addison describes the Committee on Medical Aspects of Radiation in the Environment (COMARE) report as having come at ‘an unfortunate time, after Chernobyl.” http://www.nationalarchives.gov.uk/about/news/newly-released-files-1985-1986/prime-ministers-files-prem-1986/ Open Government Licence v3.0,

There are lengthy documents available online which may hold relevant information but have to be read through as they are typed and handwritten.

2014 was both St. Hilda’s 1400 birthday and the 30 Year Anniversary of Hilda Murrell’s murder. While we have been sitting on the edges of our seats, waiting to see if Hilda Murrell documents will or will not be released, no one else seems to be. The UK actually released documents a day or two early, but we still don’t know if there is anything in there on Hilda Murrell. Absence of release is, of course, the most damning of all. [Update – They are supposedly releasing 7 files in February, whereas they were to be released 31 December. Are they taking those months to edit, so that they only appear to be releasing information? Strange indeed.]

All sorts of interesting things ARE digitized and released from this period of England’s most well-known and hated Prime Minister Margaret Thatcher. Sadly Thatcher has soiled the names of the two most important female British Saints, for her name is ironically Margaret Hilda Thatcher. And, it is almost certain that evil Margaret Hilda Thatcher had saintly Hilda Murrell killed. Since the current English Prime Minister – David Cameron – was reportedly close to Thatcher, we doubt the truth comes out.

Only Russia with its huge media-propaganda budget has bothered to start delving seriously into this important archival release. They have reported something of interest, but as we wish to have nothing to do with England’s twin evil empire of Russia, we will have to report when we have time to read the originals ourselves. The US has always been a subsidiary of the English Empire – this is clear from history. It surely isn’t an accident that the English elites always studied the Roman Empire. In more recent times (last 500 to 1,000 years) the colonial settler state put into place by England within Ireland, and later in the Americas, is the model for the ongoing persecution of the indigenous peoples around the world. However, it harkens further back to at least Roman times. Why do Romanians speak a language so close to Latin? The indigenous peoples of Romania revolted; many or most were killed; and Romania was colonized by Romans. The only difference is that now we are faced by nuclear empires with the capacity of obliterating the entire earth with faulty nuclear reactors or weapons. The madness of the elites is apparently not new for Rome had emperors known to be mad, as well.