Here is more evidence that incompetence is a prerequisite for working for the US NRC – the US NRC wrote the wrong company name in the Federal Register for the new license holder for 2 US reactors. And, by the way, the US NRC has still not corrected this error, even though they were on this blog months ago: https://miningawareness.wordpress.com/2014/09/04/the-dangerous-us-nrc-typo-making-low-level-radioactive-waste-more-radioactive-than-allowed-at-wipp/

Now that the Japanese government has just signed to make Japan liable for US Nuclear accidents and vice versa, maybe the Japanese will take note of the dangerous incompetence of the US NRC, since most Americans are oblivious. [1] The Chinese that everyone needs to fear isn’t located in China, but rather in the US: Alan B. Wang, Project Manager for Plant Licensing at the US NRC, who seemingly can’t even figure out the name of the company which 2 US Nuclear Reactors are being licensed to; who has apparently condoned wishing away the earthquake-tsunami risk at Diablo Canyon, as well as approving Diablo’s violation of American Society of Mechanical engineer (ASME) protocols for reactor pressure vessel safety- protocols which are supposed to be the NRC’s standard. Approving “relief” from safety standards for nuclear reactors appears his favorite pastime. Not surprising that he also approved the hiding of information about the largest nuclear reactor in the US, under the fake guise of protecting proprietary information. We have itemized some of his crimes at the bottom of this post:[1] When US nuclear disaster strikes you will know one of the main culprits to go looking for. But, Mr. Wang probably counts on returning to Taiwan or maybe China – as far away as possible from the accidents he will likely cause in the US, through refusal or inability to act as regulator.

Not knowing the right name for the company which will own the nuclear reactors is pretty serious. If Wang couldn’t even figure out the final owner, even though Entergy clearly explained it with graphics, it appears unlikely that he could figure out the more complex topic of what Entergy is up to in this transfer. How then can he approve it? And, why was the public only given one month, during the holiday season, to comment?

The name of the entity getting the license for the Waterford and Riverbend nuclear reactors is wrong in the Federal Registrar and signed off by Project Manager Alan Wang. As such, the NRC should be asked to extend the comment period for this transfer.

The fact that the request for restructuring ownership of the two Louisiana reactors was filed by Entergy after Memorial Day weekend and the NRC comment period runs from 2 Dec. 2014 to 2 Jan. 2015 makes clear that Entergy and the NRC are up to no good. Who is surprised? Our previous 2 posts deal with tricks Entergy has attempted to play in the past. Thanksgiving to New Years is the prime season for sneaking things past Americans.

The end result of this nuclear restructuring is replacing several corporations lying between Entergy and the Nuclear Reactors with LLCs. What is distinct about that is that the LLCs do not have to have regular meetings with minutes. As such, they leave less of a paper trail, which makes assessing liability or what’s going on virtually impossible. Liability may then fall upon the US taxpayer. And why are the new companies registered in Texas rather than Louisana? 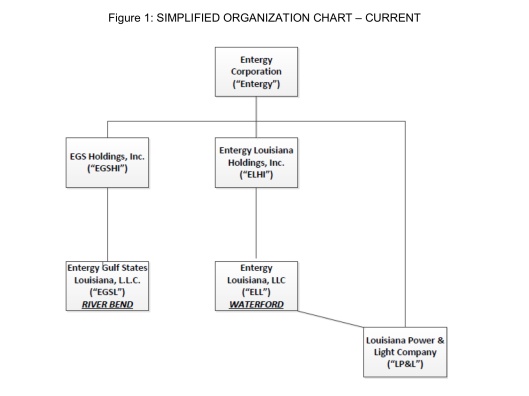 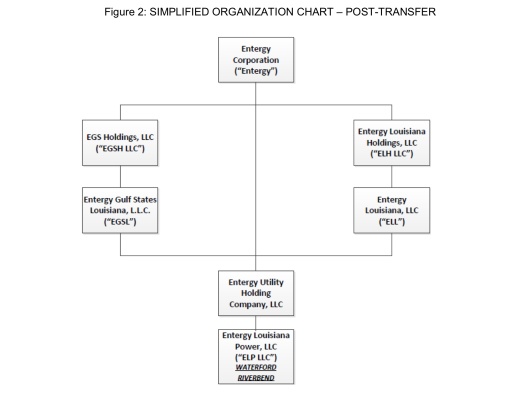 According to the Federal Register regarding transfer of the two nuclear power stations:
“In a series of related transactions, Waterford would be directly transferred to Entergy Louisiana, LLC from ELL… River Bend would be (1) directly transferred to Entergy Louisiana, LLC pursuant to a merger under the TXBOC,… In addition, the general license for the ISFSI held by ELL for Waterford and ESGL for River Bend under 10 CFR part 72 will transfer with the 10 CFR part 50 license. Following approval of the proposed direct and indirect transfers of control of the licenses, Entergy Louisiana, LLC would acquire ownership of Waterford and River Bend..”
71804 Federal Register / Vol. 79, No. 232 / Wednesday, December 3, 2014 / Notices

As can be seen above and below, the final entity is NOT Entergy Louisiana, LLC but rather Entergy Louisiana Power, LLC. While that may appear a small difference, it is not. In this case, luckily there is an Entergy subsidiary still named Entergy Louisiana, LLC. Even still this could create a liability issue. But, what if there were not such a subsidiary and what if someone else set up a shell company with that name? Are they then owners of the nuclear reactors?  While we are tempted to say “What if terrorists…”, terrorists are no longer an issue because the US NRC not only allows the nuclear industry to terrorize the world, but acts as enabler, helping the nuclear industry to wish away nuclear reactor defects on both a daily basis and in court hearings (e.g. Davis Besse).

Entergy, to their credit, makes clear who is the final owner. They make nice charts and even put POWER in red on the old nuclear licenses. But, the dim-wits at the US NRC can’t even figure that out, despite their fat salaries paid for by tax-payers who they fail to protect.
Here’s what Entergy says about the ownership:
“when the transactions are complete at the end of the day of closing, each owner licensee will have transferred its assets and liabilities to a new entity, Entergy Louisiana Power, LLC (ELP), that will hold as the owner the respective NRC licenses for RBS and Waterford. This new entity will be owned by a new intermediary holding company named Entergy Utility Holding Company, LLC. Thus, approval of the license transfers is required pursuant to 10 CFR 50.80.
….
Upon consummation of the proposed transaction, the former assets and liabilities of ELL and EGSL will be owned by a single operating company, ELP.” From “CNR0-20 14-00007, June 10, 2014″, which is the cover letter to “Application for Order Approving License Transfers and Conforming License Amendments, Entergy Operations, Inc. (All Dockets) River Bend Station Docket Nos. 50-458 & 72-49 Waterford 3 Steam Electric Station Docket Nos. 50-382 & 72-75” http://pbadupws.nrc.gov/docs/ML1416/ML14161A698.pdf

Here it is in Red! These are two pages but there are many which show the word “Power” in red. And, if Alan Wang is seeing impaired, he should have a talking computer and/or an assistant. There is no excuse here! 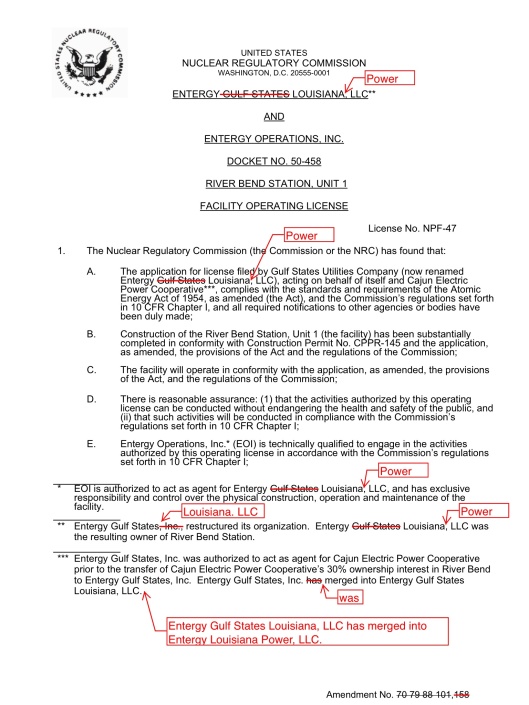 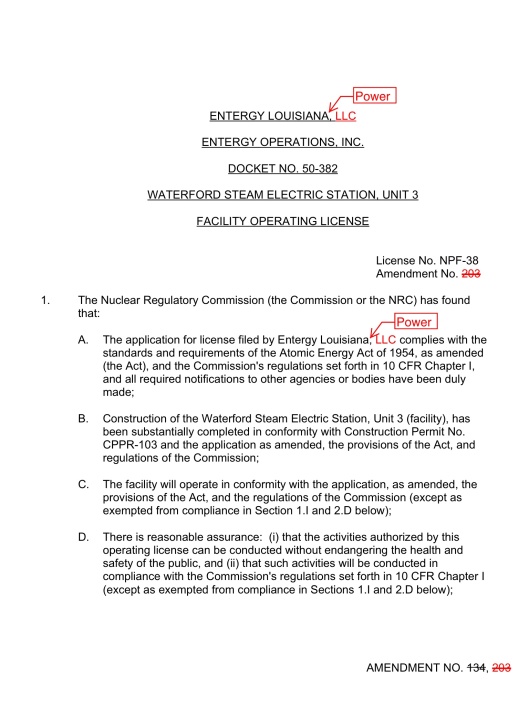 That is the only place in the entire document that “Entergy Energy Company”, soon to be the NEW “Louisiana Power & Light Company” LLC appears. We have no idea what this company does, but it appears to have nothing to do with these two reactors. So, to say that it does is misleading and problematic. We cannot even find “Entergy Energy Co.” online, but assume that it is someplace in the 14 pages of Entergy subsidiaries found online.

Grand Gulf is the most powerful reactor in the US and just had its environmental review published to operate the next 20 years.
“GRAND GULF NUCLEAR STATION, UNIT 1 – VERBAL AUTHORIZATION OF RELIEF REQUEST ISI-17, PROPOSED ALTERNATIVE REGARDING STRUCTURAL WELD OVERLAY (SWOL) ON THE N06-KB RESIDUAL HEAT REMOVAL SYSTEM/ LOW-PRESSURE COOLANT INJECTION “C” NOZZLE TO SAFE-END DISSIMILAR METAL WELD (TAC NO. ME8525)” http://pbadupws.nrc.gov/docs/ML1213/ML121380483.pdf

Information being hidden at Grand Gulf. Proprietary is clearly BS. The public needs to see this information for safety purposes:
“Revised Response to Items 1 and 2 of the Request for Additional Information Regarding “Maximum Extended Load Line Limit Plus” Amendment Request, dated 5/19/2014. Grand Gulf Nuclear Station, Unit 1 Docket No. 50-416 License No. NPF-29“:
“The revision removes the text above the 50 MWtlMlbm/hr line on the Thermal Power vs. Core Flow map as agreed during a call with the Nuclear Regulatory Commission (NRC) on September 12, 2014.” Oct. 2, 2014: http://pbadupws.nrc.gov/docs/ML1427/ML14275A050.pdf

“Based on the NRC staff’s current understanding of the fault orientation, surface rupture under the facility is highly unlikely. Although the fault rupture is unlikely to occur directly under the plant, it may cause deformations in the near field.” (p. 10)
Shoreline fault summary-Diablo Canyon Nuclear Power Station: http://pbadupws.nrc.gov/docs/ML0903/ML090330523.pdf

Regarding Diablo Shoreline Fault and Tsunami Risk: “the licensee stated that the tsunami hazard threat is relatively small since it is a strike-slip fault rather than a reverse fault and, therefore, the tsunami hazard from the potential new fault is not expected to exceed the plant’s design-basis tsunami hazard levels.” http://pbadupws.nrc.gov/docs/ML0909/ML090930459.pdf

Notice above it says “relatively small” and “not expected” and see here regarding a strike-slip tsunami in Haiti:
“coastal strike-slip fault systems such as the Enriquillo-Plantain Garden fault produce relief conducive to rapid sedimentation, erosion and slope failure, so that even modest predominantly strike-slip earthquakes can cause potentially catastrophic slide-generated tsunami-a risk that is underestimated at present.” From Abstract of: “High tsunami frequency as a result of combined strike-slip faulting and coastal landslides“, by Hornbach, Braudy, Briggs et. al. Nature Geoscience (Impact Factor: 11.67). 10/2010; 3(11):783-788. http://www.researchgate.net/publication/232756375_High_tsunami_frequency_as_a_result_of_combined_strike-slip_faulting_and_coastal_landslides

[1] The Convention just ratified by the Japanese gov and comes soon into force is the “Convention on Supplementary Compensation for Nuclear Damage”. Americans and Japanese need to see who is going to pay into this American-Japanese liability pool. While one US document claims that the US taxpayer will not pay, they almost certainly will have to, especially if there are accidents in more than one country, causing fund depletion. Americans and Japanese are also now liable for accidents in several other countries. According to the treaty it must be paid. It doesn’t appear to specify how. Additionally the deciding court is in the place where the accident occurred.
“obligation on all Contracting Parties to the Convention to make available public finds according to the formula specified in Article IV.”
http://state. gov/md5951.htm The formula is based on nuclear capacity. This means that the US pays approximately one dollar for every 50 cents that Japan pays (It’s something like 99 cents and 42 cents in reality). However, US liability is capped at one third of the cost of a foreign accident. The purpose of this convention is to let nuclear service providers off the hook for liability except to the extent that they may be retroactively forced to pay into the group insurance fund. This means that everyone can dump their defective fuel on the US and Japan, and do experiments with computer programs with almost no fear – they cannot be sued. They can continue to make a killing. If memory serves correctly the other countries who have signed on are Romania, Morocco, Argentina and the UAE, meaning that these countries can also be treated as defective equipment dumping grounds and guinea pigs and in the event of an accident Japan and the US pay by whatever means. Yes, these countries will pay but perhaps one penny for every 42 cents Japan pays and 99 cents the US pays. (These figures are by memory so go to original sources for the exact figures.)