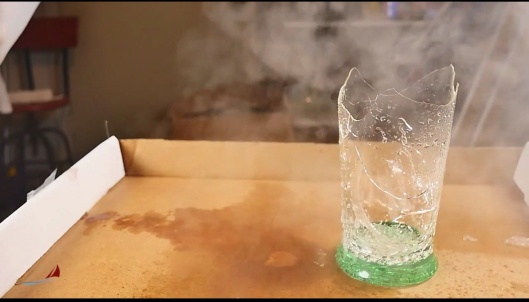 [Warning: Please do NOT try this at home, as it can cause eye and other injuries.]

What makes embrittlement so dangerous and frightening is that during an emergency when the reactor must be cooled down quickly, the rush of cold water necessary to cool it could create a scenario that looks like the one in our video. You will only see steam escaping in our video, but in an embrittled shattering reactor vessel, that steam would be highly radioactive.

Aging nuclear reactors around the globe are subject to this steel embrittlement that is a measure of how prone the steel reactor vessel is to cracking. The metamorphous of the strong steel vessel into something as brittle and fragile as glass is due to the constant neutron bombardment from the chain reaction inside the nuclear core.

While several U.S. nuclear reactor vessels are showing early signs of embrittlement, Entergy’s Palisades nuclear plant is the most embrittled plant in the country. Located in Covert, Michigan, it is one of the oldest reactors in the world and now one of the most dangerous to continue operating due to its embrittled reactor vessel. Palisades owner, Entergy Nuclear Operations Inc. is attempting to take advantage of a 2010 regulatory change that allows embrittled nuclear plants to operate longer by analyzing the problem mathematically, rather than actually testing the material to accurately determine its strength. In the interest of nuclear safety, the Palisades reactor and all the aging reactors throughout the world should continue to be subjected to actual material testing just as they were originally designed to be.

I would like to talk to you today about a significant issue with aging nuclear reactors throughout the world.

For decades, the nuclear industry has known that when the metal is subject to intense neutron radiation, it become brittle, and can shatter like glass. This phenomenon is called Neutron Embrittlement.

The average age of America’s nuclear reactors is more than 30-years old and aging Neutron Embrittlement is one of the riskiest issues facing the nuclear industry in the US and worldwide.

In order to prevent an embrittled nuclear reactor vessel from shattering as if it were glass, the reactor must be kept at a temperature of more than 250 degrees when steam pressure is applied. Scientifically this is called the Nil-ductility transition temperature.

Obviously, we don’t have a 40-year old nuclear reactor to shatter for an embrittlement experiment, but we want to show you what might happen if cold water were to hit a hot reactor vessel during a nuclear accident. This is called pressurized thermal shock. Please don’t try this experiment at home!

The glass we are using will be heated to 470 degrees in the oven to represent an aging and embrittled nuclear reactor vessel.

First, we will simulate cold water being injected to cool the nuclear reaction inside.

What happens should be bad for the glass, and would be even worse if it was a nuclear reactor!

Let’s go give it a shot!!
Let’s watch that again in SUPER Slow Motion!

“I have been studying and testifying to the NRC about the Palisades nuclear plant in Michigan, and it is the most embrittled nuclear reactor in the world. Owned by Entergy, Palisades has been in danger of being shutdown due to its embrittlement issues since 1982. Incredibly, the NRC, which was created as an advocate to protect people’s health and safety, has changed the rules more than half a dozen times so that Entergy’s Palisades’ plant can to continue to churn out electricity and profits.

Inside every nuclear reactor are metal samples that are designed to be removed to check just how bad embrittlement has become. Palisades has these samples, but doesn’t plan to look at them for two decades. Citizens in Michigan asked the NRC “Why hasn’t Palisades tested its samples?” The NRC’s response will astound you: “If they test the samples, there will be no more samples to test”. Circular logic at its best! FW believes it is better to test those samples than to run a test on the State of Michigan if there is an accident. Fairewinds analysis and testimony to the NRC is located on our website on the Palisades’ video webpage.

Allowing the embrittled Palisades Nuclear Reactor to continue to operate using only mathematical conjecture rather than testing the metal is another example of how the NRC does not do its job of protecting public health and safety.

Barring a nuclear accident, this will be our last video in 2014. I wish you and yours happy, safe holidays. Our fund drive is in full swing, and we would appreciate your support.

I’m Arnie Gundersen of Fairewinds, and we’ll keep you informed.

Palisades is on Lake Michigan, one of the Great Lakes:
“The Great Lakes are the largest surface freshwater system on the Earth. Only the polar ice caps contain more fresh water.” They contain “84% of North America’s surface fresh water about 21% of the world’s supply of surface fresh water….
The Great Lakes Basin encompasses large parts of two nations, the United States and Canada. Nearly 25% of Canadian agricultural production and 7% of American farm production
Population is more than 30 million people – roughly 10% of the U.S. population and more than 30% of the Canadian population” Read more: http://www.epa.gov/greatlakes/basicinfo.html