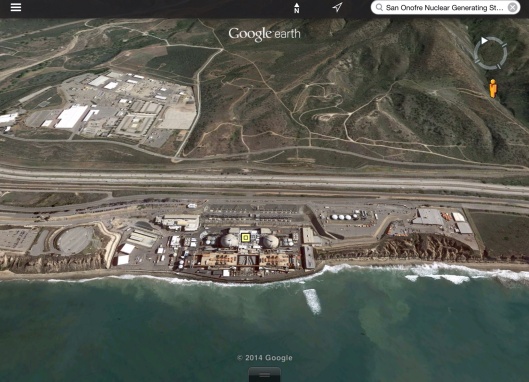 Many of San Onofre’s components seem to be going to Utah. However, the spent nuclear fuel is staying on site and a solution is needed. A spent fuel accident at San Onofre would seriously impact most of the USA, and probably parts of Mexico and Canada. To a lesser extent it will impact Europe and possibly Russia.

California Earthquake Hazard. Arrow points to the San Onofre area, which is on the coast and clearly red. 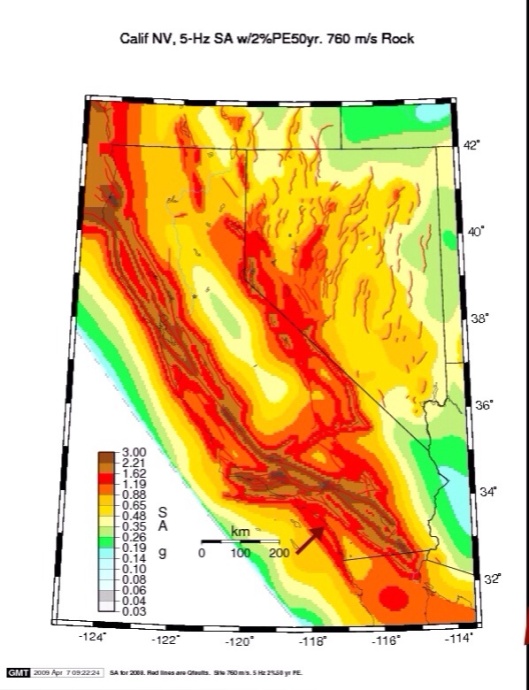 San Onofre Safety http://sanonofresafety.org has worked hard to raise the alarm regarding the flimsy nature (less than one inch thick) of proposed storage for the San Onofre spent fuel casks.

We believe that the reason that the US NRC will accept spent fuel casks less than one inch thick may lie in an apparent assumption that a risk of cancer (solid tumors or leukemia) of 18.5% or greater is acceptable to them. See: “In NUREG–1864, A Pilot Probabilistic Risk Assessment of Dry Cask Storage System at the Nuclear Power Plant” excerpt at bottom of this post. The chance of 1850 mSv exposure mentioned exceeds the ICRP maximum annual exposure of 1mSv by 1850 times, and the ICRP emergency exposure dose of 100 mSV by 185 times. The risk must certainly be even higher considering that in NUREG 2157, p. D-148, Aug. 2014 the NRC claims that they didn’t have time to take into consideration the new USGS earthquake findings for western states. The USGS map shows clearly a higher earthquake hazard, than previously thought, in an already dangerous area – one which the US NRC clearly wanted to ignore in its “Waste Confidence” rule.

This map shows that the more recent USGS study showed a significantly increased risk of earthquake at San Onofre (see arrow) than previously thought. The increased risk also includes an offshore risk which could lead to a Tsunami with no advanced warning. This is clearly why the US NRC chose to ignore the new findings. The risk has also been found greater for Diablo Canyon and for Hanford-Columbia Generating Station, based on this map.

While we share the concerns about storing spent nuclear fuel in containers that are less than one inch thick, we do not agree completely with the “San Onofre Safety” conclusions. Yes, there need to be thicker casks as they point out. We also share their concerns that casks imbedded in the ground cannot be adequately monitored.

However, material quality also matters. Sophisticated metal alloys are needed. Chemical composition matters. The ductile iron used in the German spent fuel casks could be subject to brittle fracture, stress cracking, catastrophic crack propagation-sudden failure. Rust would appear especially problematic in the coastal conditions. Anyone who has owned German cars in a coastal environment, or where road salt is used, knows rust was-is an issue. This is especially true for those who suddenly found their car batteries on the ground in older German cars, due to rust.

More protection and flexible strength might be had with a good metal alloy of five inches thick, as compared to a 14.9 inch iron cask, which may be subject to brittle fracture and rust. Our five inches is only a ball-park guess.

Concentric layering of alloyed metal layers, like for Russian nesting or Babushka (matryoshka) dolls, has been suggested to prevent the propagation of cracks from inside to out or vice versa. 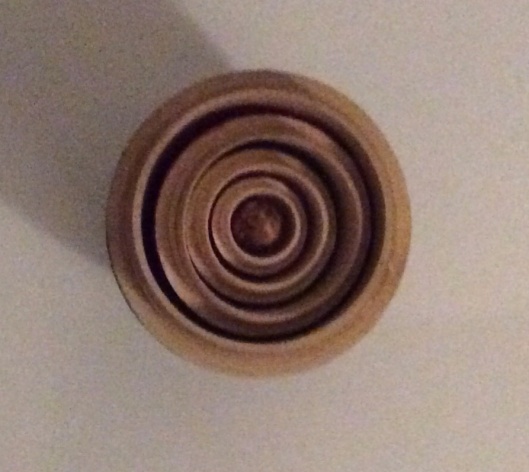 For the proposed 5/8ths of an inch thick Holtec casks, which will be inserted into concrete below ground level, we have concerns about possible puncturing of the metal by broken concrete, in the context of concrete cracking which may occur with time and/or due to earthquakes. San Onofre Safety states that there was evidence of possible salt damage to the Holtec casks at nearby Diablo Canyon when they were only a couple of years old. https://sanonofresafety.files.wordpress.com/2011/11/diablocanyonscc-2014-10-23.pdf

We believe that addressing the dry cask spent fuel storage for San Onofre and addressing it properly is urgent and must be immediate. There is no time to waste in the matter. It needs to be considered an emergency to safely store the fuel in dry casks that are both adequately thick and of a metal alloy with the proper chemical composition. It is unacceptable that the choice is only between an alloy which is too thin and a thick, but primitive and most likely inadequate, material.

In the meantime, as long as spent fuel remains in the fuel pools there needs to be adequate earthquake proof structural support to the pools, as well as some means of preventing seiche from emptying the pools: “A seiche (pronounced SAYSH) is what happens in the swimming pools of Californians during and after an earthquake. It is “an internal wave oscillating in a body of water” or, in other words, it is the sloshing of the water in your swimming pool, or any body of water, caused by the ground shaking in an earthquake. It may continue for a few moments or hours, long after the generating force is gone. A seiche can also be caused by wind or tides.” http://earthquake.usgs.gov/learn/facts.php

The materials for these casks requires environmentally destructive mining, which also adds to the nuclear carbon footprint due to diesel for mining and transport. This is all the more reason that the metals used should be of proper chemical composition and the storage more intelligently thought through.

What the US NRC says about dry casks:
“Design Events III represent infrequent events that could be reasonably expected to occur over the lifetime of the dry cask storage facility, while Design Events IV represent extremely unlikely events or design basis accidents that are postulated to occur because they establish the conservative design basis for systems, structures, and components important to safety. Design Events III and IV include more severe events, such as earthquakes, tornadoes and missiles generated by natural phenomena, floods, fire (including wildfires) and explosions, lightning, accidents at nearby sites (facilities), aircraft crashes, canister leakage under hypothetical accident conditions, storage cask drop or tip-over, and loss of shielding. The dose from any credible design basis accident to any individual located at or beyond the nearest boundary of the controlled area may not exceed that specified in 10 CFR 72.106; specifically, the more limiting total effective dose equivalent of 0.05 Sv (5 rem) or the sum of deep dose equivalent to and the committed dose equivalent to any individual organ or tissue (other than eye lens) of 0.05 Sv (50 rem); a lens dose equivalent of 0.15 Sv (15 rem); and a shallow dose equivalent to skin or any extremity of 0.5 Sv (50 rem).” http://pbadupws.nrc.gov/docs/ML1419/ML14196A105.pdf
Note their typo above.
.5 sieverts = 500 millisieverts
.05 sieverts = 50 millisieverts
50 rem = 500 millisieverts

Excluding alpha emitters, and only accounting for Low LET gamma exposure, the 50 mSv translates into a 1 in 200 chance of a solid tumor or leukemia, based on the US National Academy of Science’s BEIR. It would seem then that the 500 mSv to skin or extremities would translate into a 5 in 100 chances of skin cancer or cancer in the extremities.

The original Federal Register for 10 CFR 72, § 72.106 Controlled area of an ISFSI or MRS says:
“Any individual located on or beyond the nearest boundary of the controlled area may not receive from any design basis accident the more limiting of a total effective dose equivalent of 0.05 Sv (5 rem), or the sum of the deep-dose equivalent and the committed dose equivalent to any individual organ or tissue (other than the lens of the eye) of 0.5 Sv (50 rem).” http://www.law.cornell.edu/cfr/text/10/72.106
Unlike the US NRC, Cornell law school realizes that there is no room for typos on such an important matter.

“In NUREG–1864, A Pilot Probabilistic Risk Assessment of Dry Cask Storage System at the Nuclear Power Plant, the NRC analyzed various phases of the dry cask storage process from loading fuel from the spent fuel pool, preparing the cask for storage and transferring it outside the reactor building, moving the cask from the reactor building to the storage pad, and storing the cask for 20 years on the storage pad (NUREG 2007f). The study assessed a comprehensive list of initiating events, including dropping the cask during handling and external events during onsite storage (such as earthquakes, floods, high winds, lightning strikes, accidental aircraft crashes, and pipeline explosions). The study also modeled potential cask failures from mechanical and thermal loads. As shown in Table 18 of NUREG–1864, the largest conditional consequences to an individual person of postulated accidents are expected to range from 2.8 mSv (280 mrem), at a distance of less than 1.6 km (1 mi), up to 1.85 Sv (185 rem) at the same distance.” http://pbadupws.nrc.gov/docs/ML1419/ML14196A105.pdf
1.85 sieverts = 1850 millisieverts

“For example, a postulated 5.8-m (19-ft) drop of a multipurpose canister while being lowered from the transfer cask to the storage cask would result in larger consequences. This drop can happen due to a design basis earthquake during canister handling operation and has the most severe consequence of potential drops. However, the probability of a release causing this dose consequence, which includes consideration of the initiating event frequency and conditional probability of release, given the event occurs, is about 3 × 10−5/yr.” http://pbadupws.nrc.gov/docs/ML1419/ML14196A105.pdf

“Lethal dose (LD)
The dose of radiation expected to cause death to 50 percent of an exposed population within 30 days (LD 50/30). Typically, the LD 50/30 is in the range from 400 to 450 rem (4 to 5 sieverts) received over a very short period.
Page Last Reviewed/Updated Thursday, November 20, 2014” http://www.nrc.gov/reading-rm/basic-ref/glossary/lethal-dose-ld.html

Excluding exposure from High LET alpha emitters such as plutonium, and including only external low-LET gamma radiation (or X-rays) the 100 mSv of ionizing radiation leads to solid cancer or leukemia in 1 out of 100 people, according to the US National Academy of Sciences BEIR VII risk model. This is for a one time dose. A summary report on the BEIR, by the pro-nuclear US DoD, DOE, and NRC, tries to muddy the water by a very misleading claim that 42 out of 100 will get cancer anyway from something else, and it’s only one more out of 100! They state:
“On average, …the BEIR VII lifetime risk model predicts that approximately one individual in 100 persons would be expected to develop cancer (solid cancer or leukemia) from a dose of 100 mSv… Lower doses would produce proportionally lower risks. For example, it is predicted that approximately one individual in 1000 would develop cancer from an exposure to 10 mSv… The report also provides estimates for cancers of several specific sites.” http://dels.nas.edu/resources/static-assets/materials-based-on-reports/reports-in-brief/beir_vii_final.pdf However, the population of the US is so exposed to historic and ongoing emissions of radionuclides, both low-LET and the more dangerous high-LET (excluded from BEIR), that this 42 out of 100 is probably caused by decades of cumulative exposure. This is what they strangely fail to take into account. Populations are exposed to ionizing radiation constantly – from historic fallout, waste, and legal and illegal nuclear leakages, not just once! Additionally, the ICRP’s 1 mSv exposure per year, over 100 years, gives 100 mSv. Of course, they don’t want us to see our 100th year. For those of us who had relatives living past 100 years even in the 1700s this is particularly enraging.