There was, not surprisingly, a 5.9 magnitude earthquake, on December 20th, offshore, roughly 42 km (27 miles) from the Fukushima Nuclear Disaster Site. 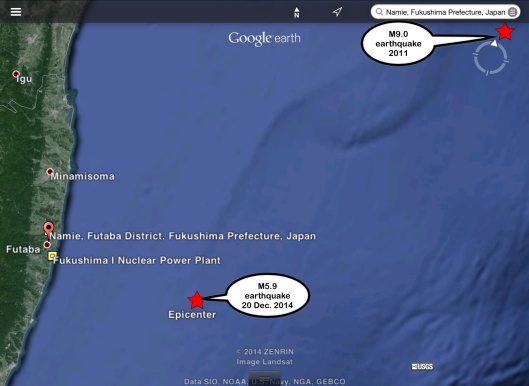 Ring of Fire people! And we don’t mean the Johnny Cash Song!: http://youtu.be/FhE6Izmkpx4 We mean the Pacific Ring of Fire where most earthquakes occur! 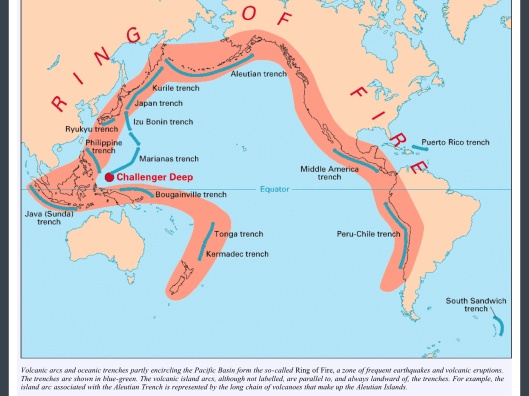 “The ‘Ring of Fire’, also called the Circum-Pacific belt, is the zone of earthquakes surrounding the Pacific Ocean- about 90% of the world’s earthquakes occur there. The next most seismic region (5-6% of earthquakes) is the Alpide belt (extends from Mediterranean region, eastward through Turkey, Iran, and northern India.” (“This dynamic earth: the story of plate tectonics” 1996, Kious, W. Jacquelyne; Tilling, Robert I., USGS Unnumbered Series General Interest Publication) http://pubs.er.usgs.gov/publication/7000097

This is the location of the 5.9 earthquake offshore from the Fukushima Daiichi Nuclear Reactor site: 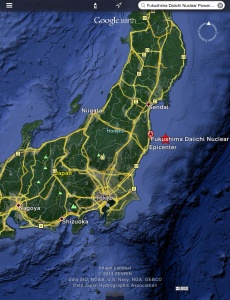 As can be seen on this map, the Fukushima Daiichi Nuclear Reactors are closer to the epicentre than Namie is, i.e. less than 49 km (30 miles). It appears roughly 42 km (27 miles). 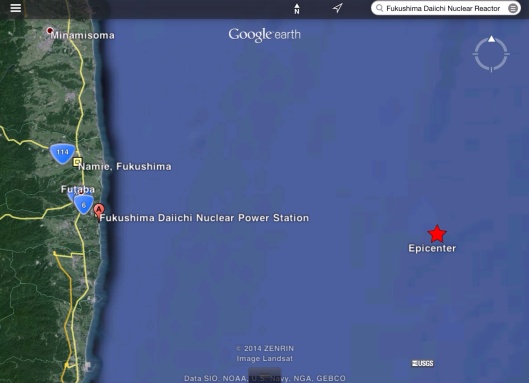 This ring is supposed to show the intensity, but it seems strange that, even at the epicentre of this 5.9M quake, they have the ring as a IV and no changes over distance. This wasn’t the case for other offshore earthquakes that we looked at – whether deeper or more shallow. 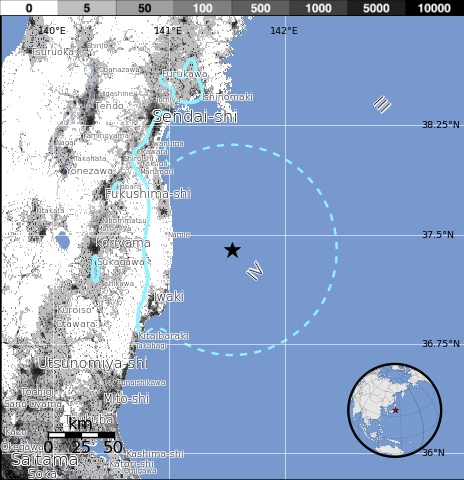 This (larger) Nicaragua earthquake is of a similar depth, and offshore, and the secondary ring hits the shoreline. 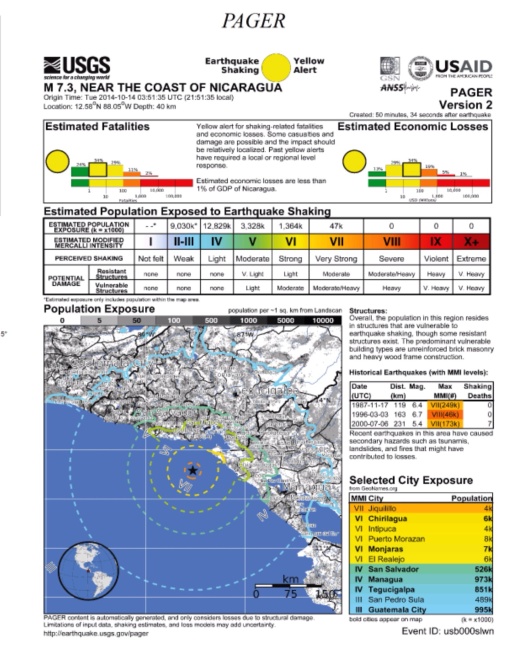 Of course the soil or earthquake type may be different. Whatever the case it should be clear that Japan is in the Ring of Fire, and earthquakes which are considered large elsewhere are small by Japanese standards. Plus there are the volcanos.

Now here is the offshore 2011 earthquake, which was much more shallow and, of course larger, but it is striking that there is variability of shaking, presumably due to differences in soil type. For yesterday’s earthquake there is no variability shown. 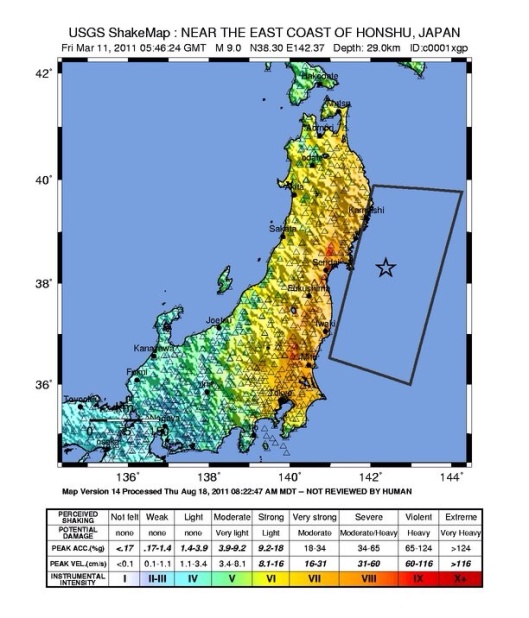 We are skeptical that this is accurate, though it could be: 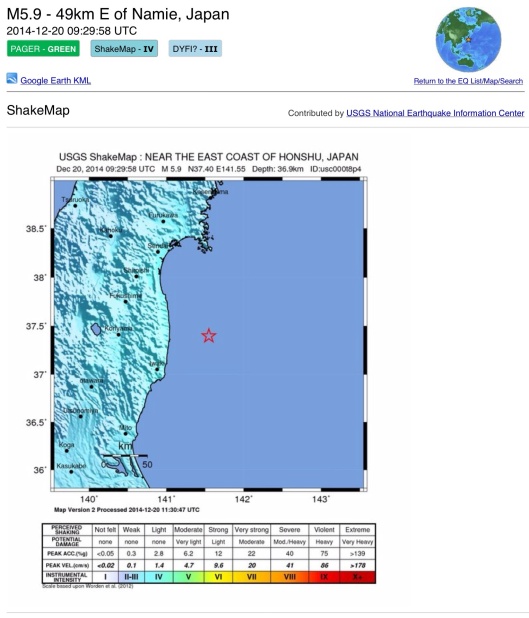 “The following describes the typical effects of earthquakes of various magnitudes near the epicenter. The values are typical only and should be taken with extreme caution, since intensity and thus ground effects depend not only on the magnitude, but also on the distance to the epicenter, the depth of the earthquake’s focus beneath the epicenter, the location of the epicenter and geological conditions (certain terrains can amplify seismic signals).”
Description of Magnitude and Mercalli (Roman numerals) scales:
“4.0–4.9 Light IV to VI Noticeable shaking of indoor objects and rattling noises. Felt by most people in the affected area. Slightly felt outside. Generally causes none to minimal damage. Moderate to significant damage very unlikely. Some objects may fall off shelves or be knocked over.
5.0–5.9 Moderate VI to VIII Can cause damage of varying severity to poorly constructed buildings. At most, none to slight damage to all other buildings. Felt by everyone. Casualties range from none to a few.” http://en.wikipedia.org/wiki/Richter_magnitude_scale
Here is a 6.4 Magnitude earthquake from 2009 (more shallow and closer to the shore): 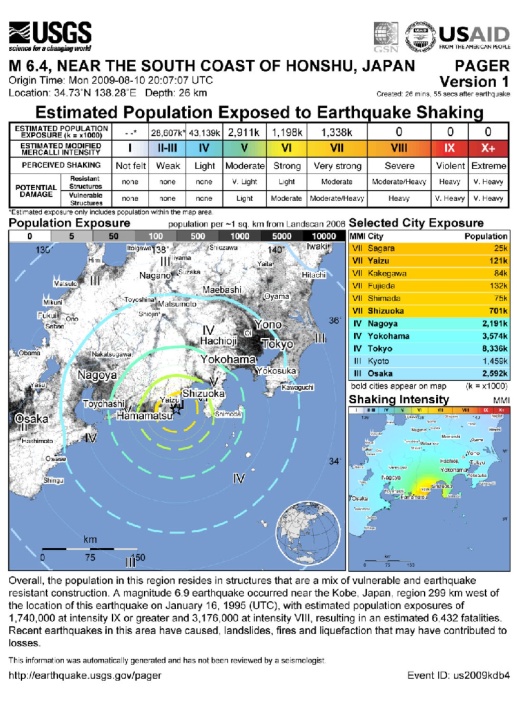 Here is earthquake frequency for Magnitude Greater than 5 in Japan: 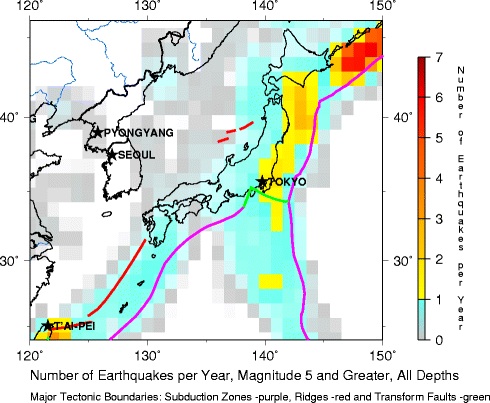 Here is a Peak Ground Acceleration map for Japan from the USGS.
Note that it is in meters per second, as opposed to cm per second. 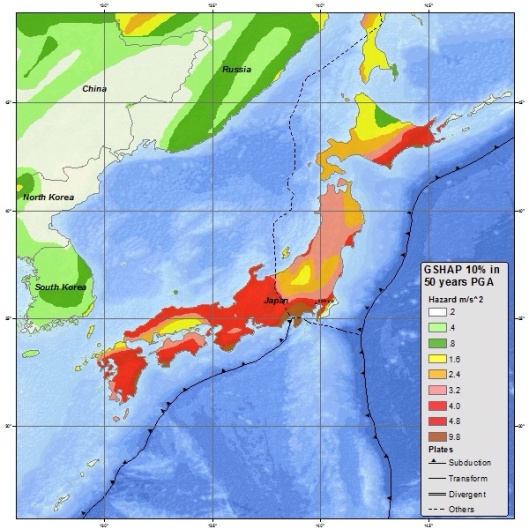 Important relevant pieces regarding radioactive waste disposal in the Fukushima area. They can also be impacted by subsequent earthquakes, as can the reactors:
https://japansafety.wordpress.com/2014/10/29/radioactive-soil-stored-at-fukushima-schools-not-covered-by-recent-disposal-law-has-nowhere-to-go-the-japan-times/
https://japansafety.wordpress.com/2014/09/05/fukushima-accepts-temporary-radioactive-waste-storage-channel-newsasia/d