“The Fort Calhoun Nuclear Generating Station is a nuclear power plant located on 660 acres (2.7 km2) between Fort Calhoun, and Blair, Nebraska adjacent to the Missouri River… The power plant is owned by the Omaha Public Power District of Omaha, Nebraska and operated by Exelon Nuclear Partners. When operational, the plant accounts for 25 percent of OPPD’s net generation capabilities,[1] but was shut down from April 2011 to December 2013 because regulators had found several problems.[2] The plant was cleared to restart in December 2013.[3]

Fort Calhoun houses spent fuel rods in a 40-foot (12 m) deep spent fuel pool next to the reactor, and when the pool had nearly reached capacity in 2006, OPPD began to store spent fuel rods above ground in dry cask storage as well. In total, the Ft. Calhoun reactor has 600,000 to 800,000 pounds (270,000 to 360,000 kg) of high level nuclear waste.[6] The storage was not designed to house spent fuel permanently, but when plans for Yucca Mountain nuclear waste repository were terminated, OPPD stated that they are “prepared to safely store material on-site as long as necessary”.[7]

The plant underwent refurbishment in 2006 by having its steam generators, pressurizer, reactor vessel head, low pressure turbines and main transformer replaced. In 2003, the plant had its operating license renewed for an additional twenty years. With the renewal, the license for Fort Calhoun was extended from August 9, 2013, to August 9, 2033.[8]

The 2011 Missouri River floods surrounded the plant with flood water. The nuclear reactor had been shut down and defueled in April 2011 for scheduled refueling. A fire caused electricity to shut off in the spent fuel pools resulting in 90 minutes without cooling[9] qualifying as a “red event”, signifying a high-level threat to Fort Calhoun operations.[10] The flood and resulting fire was called “one of the most serious safety incidents in recent years” and resulted in a three-year cold shut-down of the plant.[11]

In August 2012 OPPD signed a deal for Exelon Nuclear Partners to manage the plant although OPPD would maintain ownership.[12]” http://en.wikipedia.org/wiki/Fort_Calhoun_Nuclear_Generating_Station

A fire occurred on June 7, 2011, in electrical switchgear that distributes power to vital systems and components needed for the safe shutdown of the plant. This fire affected two independent trains of the system and resulted in the NRC issuing a preliminary red finding on March 12, 2012, following a special inspection. The special inspection report is found in the below documents.

The fire started in a replacement electrical breaker that was modified to fit inside the existing electrical switchgear. The replacement breaker was installed and in service for about 18 months before the fire occurred.

Poor alignment between electrical components and inadequate cleaning of the connections (hardened grease at the interface) increased the electrical resistance at their junction. These conditions created a buildup of heat that caused a fire affecting one train; electrically conductive soot and smoke spread past a barrier and tripped the breaker on the opposing train. This electrical fault resulted in the complete loss of spent fuel pool cooling for approximately 90 minutes, resulting in a 3°F temperature rise in the pool.

Fort Calhoun Station staff has taken compensatory measures to ensure that high resistance connections were corrected in the other affected load centers, and reactor shutdown cooling systems were not directly affected. The NRC is in the process of reviewing Fort Calhoun Station’s actions in response to the fire. The reactor at Fort Calhoun Station is currently shutdown and will not be allowed to restart until the IMC 0350 Panel grants approval.” http://www.nrc.gov/info-finder/reactor/fcs/special-oversight.html

TEFLON is not for nuclear reactors! 2014 Update. 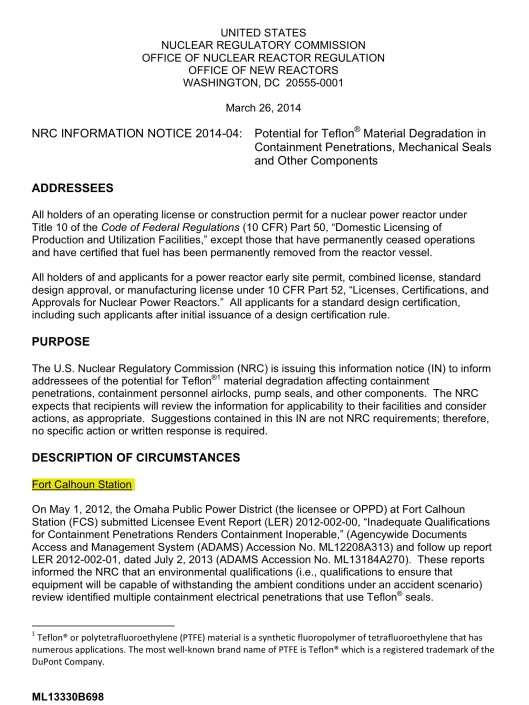 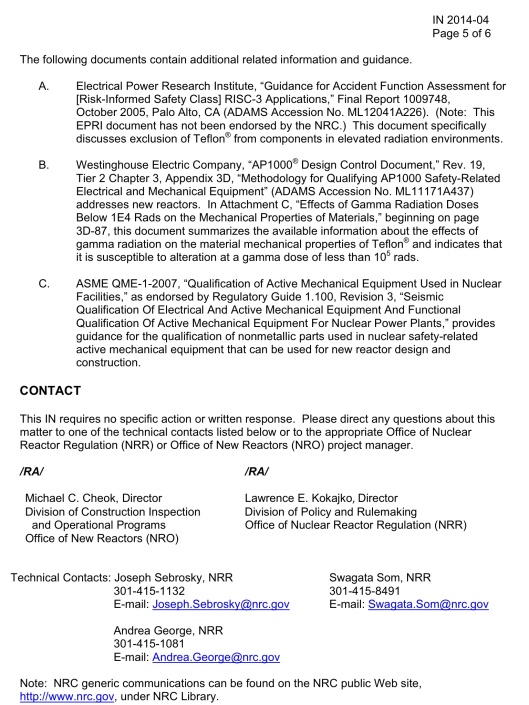