Lost Creek uranium miner, Ur-Energy, appears to have come up with a nifty trick: They spilled so much loose uranium on the inside and exposed workers, that the US NRC had little time to check outside for environmental violations!
(See original document below.)

The largest shareholder of Ur-Energy is Global X whose largest shareholder is Cameco. Lost Creek just started operations in 2013. It threatens the habitat of the Greater Sage Grouse. Note that many European countries, such as the UK and France, import uranium for their nuclear reactors from places like their former colonies of Niger, the US, Canada, Australia and elsewhere. France has still not finished cleaning up its old uranium mines.

Greater Sage Grouse, Photo by Pacific SW Region USFWS, Sacramento.
The UK parliament claim that they don’t even know for sure the exact origin of their uranium: http://www.publications.parliament.uk/pa/cm201012/cmselect/cmenergy/1065/1065vw11.htm The uranium from Lost Creek could fuel the proposed new nuclear reactor at Moorside in Cumbria, home to this European Lapwing: 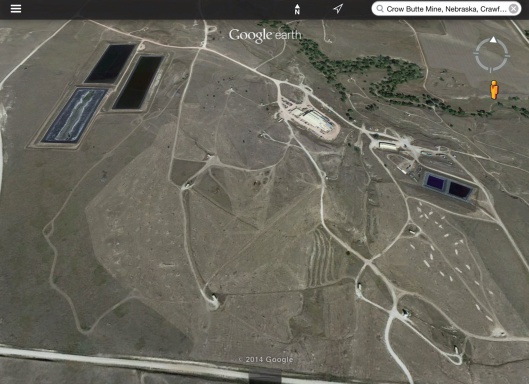 Uranium Oxide, aka Yellowcake
Six of Sixteen pages from the USNRC original with our highlights-comment added:

Entire Original with no comments here: http://pbadupws.nrc.gov/docs/ML1431/ML14318A974.pdf (Note we have reverted to puke yellow as our highlight because a) it is easier on the eyes and b) its ugly puke color is more appropriate than bright yellow.)
Owner of Lost Creek Mine is Ur-Energy (URG) of Canada. The largest shareholder is Global X Uranium ETF (URA) whose largest shareholder is uranium mining giant Cameco. Second largest shareholder of Ur-Energy is iShares Micro-Cap, followed by Tocqueville Alternative Strategies. We mention the last two as the names do not make it clear that one is investing in uranium or other mining.

This Waste Control Specialists Dump Facility is huge: “The organization’s main operation is a fully permitted, 1,338-acre treatment, storage and disposal facility near Andrews, Texas. WCS’ facility in western Andrews County is the only commercial facility in the United States licensed in more than 30 years to dispose of Class A, B and C low-level radioactive waste. It is also licensed for the treatment and storage of low-level radioactive waste, and has served as a temporary storage facility for U.S. Department of Energy (DOE) projects.” http://en.wikipedia.org/wiki/Waste_Control_Specialists What they call low level waste is very high level, highly radioactive, waste. It is anything but spent fuel. With accidental or on-purpose typos by the US NRC, it is higher still: https://miningawareness.wordpress.com/2014/12/08/the-dangerous-us-nrc-typo-making-low-level-radioactive-waste-more-radioactive-than-allowed-at-wipp-2/

LANL waste destined for WIPP has been sent to this dump facility! Some of it is believed at risk for fire-explosion, like at WIPP.
“First LANL Shipment Arrives at Waste Control Specialists Facility
ANDREWS, Texas, April 2, 2014 – The U.S. Department of Energy (DOE) and Nuclear Waste Partnership (NWP) today announced that the first transuranic waste shipment arrived at the Waste Control Specialists facility in Andrews, Texas. Defense-related transuranic waste will be temporarily staged at the commercial facility until the Waste Isolation Pilot Plant (WIPP) resumes disposal operations” http://www.wipp.energy.gov/pr/2014/First%20LANL%20Shipment%20Arrives%20at%20WCS.pdf

“Yellowcake: The solid form of mixed uranium oxide, which is produced from uranium ore in the uranium recovery (milling) process. The material is a mixture of uranium oxides, which can vary in proportion and color from yellow to orange to dark green (blackish) depending on the temperature at which the material is dried (which affects the level of hydration and impurities), with higher drying temperatures producing a darker and less soluble material. (The yellowcake produced by most modern mills is actually brown or black, rather than yellow, but the name comes from the color and texture of the concentrates produced by early milling operations.) Yellowcake is commonly referred to as U3O8, because that chemical compound comprises approximately 85 percent of the yellowcake produced by uranium recovery facilities, and that product is then transported to a uranium conversion facility, where it is transformed into uranium hexafluoride (UF6), in preparation for fabricating fuel for nuclear reactors.” (US NRC)