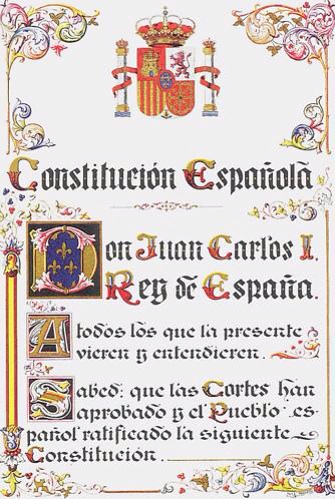 “Spanish Constitution of 1978: ‘…to all those present to see and hear, BE IT KNOWN: That the Cortes have approved and the People of Spain have ratified the following Constitution” http://en.wikipedia.org/wiki/Spanish_Constitution_of_1978

From Greenpeace:
“#Cofrentes17: why Spain’s Constitution Day is important to us all” Blogpost by Andrew Kerr – 6 December, 2014
“Right now, 16 Greenpeace activists and an independent photojournalist are standing trial in Valencia for a peaceful protest they staged against the risks posed by the 30-year old Cofrentes nuclear power plant, near Valencia. They are the #Cofrentes17. As they worry about the verdict, people all over Spain are today celebrating the anniversary of a referendum held in 1978 that helped to transform their country from a dictatorship to a constitutional monarchy and democracy. Dictator Franco ruled the roost for 36 years, from April 1939 until his death in late 1975.

Spain’s new constitution can hardly have a more pro-environmental wording. Article 45 of the constitution states: “Everyone has the right to enjoy an environment suitable for the development of the person, as well as the duty to preserve it. The public authorities shall watch over a rational use of all natural resources with a view to protecting and improving the quality of life and preserving and restoring the environment, by relying on an indispensable collective solidarity. For those who break the provisions contained in the foregoing paragraph, criminal or, where applicable, administrative sanctions shall be imposed, under the terms established by the law, and they shall be obliged to repair the damage caused.”

Yes, nobody expects the Spanish Constitution. All good in Spain, then? Well, not any longer. Although the anniversary is celebrated with a national holiday, dark clouds are gathering over the freedom to protest and to stand up for the environment.

Four years ago, the #Cofrentes17 entered the Cofrentes nuclear power plant and painted “Peligro Nuclear” (Nuclear Danger) on one of its cooling towers.

They believe that it was their duty and right under Spain’s constitution to stand up for the environment. In a trial that is scheduled to run through to 11 December the #Cofrentes17 are each facing prison sentences of nearly three years. And Greenpeace Spain could be fined nearly €360,000. The #Cofrentes17 face the harshest punishment that any activists with Greenpeace Spain have encountered in 30 years’ of peaceful protest.

Is this part of a pattern of the Spanish government clamping down on peaceful protest? Just over two weeks ago, a separate group of Greenpeace activists in Spain made the international news when Spanish Navy boats rammed one of our inflatable boats during a peaceful protest against oil exploration in the Canary Islands. One activist was hospitalised following the Navy’s highly aggressive response to Greenpeace Spain’s attempt to hang a banner on the drill ship saying, ‘no to oil exploration, yes to renewable energy’.

These activists, too, believed that they had a duty and a right to stand up for the environment. What the Cofrentes and Canary Islands protests have in common is that these entirely legitimate and peaceful activities met with disproportionate reactions from the Spanish authorities.

Surely it’s the Spanish government that should be on trial for both trying to block the constitutional right and duty of Spanish citizens to preserve the environment, and for its own failings in not doing enough.

What were the #Cofrentes17 doing if not exercising their constitutional duty to preserve the environment? And, in the Canary Islands, we believe that in allowing irresponsible oil exploration – which is opposed by 75% of the islands’ citizens – the Spanish government is failing in its duty to ensure, “rational use of natural resources with a view to protecting and improving the quality of life and preserving and restoring the environment”. After all, Spain has abundant untapped resources of clean renewable energy.

How you can help

In five simple steps you can add your support to thousands of others who are connecting with the #Cofrentes17, and also support the right to peaceful protest in a democratic society. 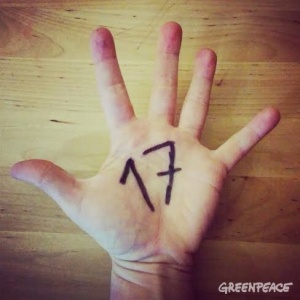 Take a selfie or a group pic 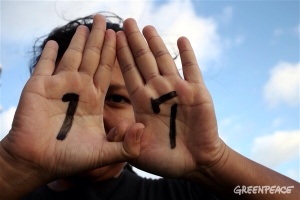 Upload the photo onto social networks with the tag #Cofrentes17, or #Misión45 (to do with Article 45 of Spain’s constitution) Invite your friends to support this campaign How hard is that? Surely not as hard as climbing a power station cooling tower to warn the world about nuclear risks! The #Cofrentes17 would very much welcome your support. Thank you, from Helena, Sonia, Amanda Luna, Nacho, Rakel, Virginia, Hernán, Nacho, Marcelí, Sonia, Vicenç, Maite, Araceli, Nelia, Auba, Fausto and Pedro. The #Cofrentes17 Andrew Kerr works on Greenpeace International’s press desk.” (Emphasis added) http://www.greenpeace.org/international/en/news/Blogs/makingwaves/cofrentes17/blog/51610/ 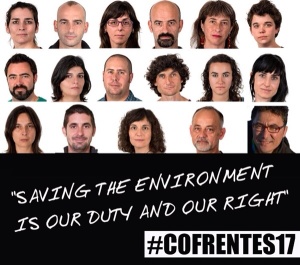 We recommend that you use something non-toxic like eyeliner, lipstick or clown makeup, rather than a pen. But, ink from a pen is certainly less toxic than nuclear!

About the Reactor: “From 2001 through March 10, 2011, Cofrentes NPP made 25 unplanned shutdowns. It notified the Nuclear Safety Council (CSN, in Spanish) of 102 security events—three of these were Level 1 on the International Nuclear Event Scale (INES). The Cofrentes plant has notified an average of 10 reported events each year in the last decade. In the 90s, it had reported three Level 1 events, which were described as ‘anomalies“. This and more here: http://en.wikipedia.org/wiki/Cofrentes_Nuclear_Power_Plant
and here including info on corrosion and location downstream from dams: https://miningawareness.wordpress.com/2014/12/06/seventeen-nuclear-headaches-and-more/