“Greenpeace activists breach perimeter fences at Forsmark Nuclear Power Station. The activists are ‘stress testing’ the facility to alert the public, the nuclear industry and minister Lena Ek on the serious safety deficiencies. 10/09/2012” [1]

From Greenpeace:
“17 nuclear headaches
Blogpost by Raquel Montón – 28 November, 2014 at 10:30
“It was my duty to do this and I did it.” These are the words of one of our Greenpeace activists when he was prosecuted last September for the peaceful protest at the nuclear power plant of Fessenheim in France. These thoughts are shared by the 17 people who participated in the action at Cofrentes nuclear power plant in Spain in 2011 to expose its dangers, for which they will be tried in the coming days. The Cofrentes 17 face a possible sentence of almost three years in prison.

Many nuclear reactors share dangerous similarities – they age, exceed operating life, and are often situated close to places with high population density. Have a look at 17 nuclear reactors from around the world that must be shut down TODAY.

1. Fessenheim, like Cofrentes, has exceeded its 30-year operating life. Despite improvements and repairs, the aging of nuclear reactors is a fact; certain components can’t be replaced, including the pressure vessel and the containment structure.

2, 3. In Belgium, reactor 3 of the Doel nuclear power plant was also designed for 30 years of operating life and its pressure vessel was built by the same Dutch company as Cofrentes, Rotterdamsche Droogdok Maatschappij (RDM). At present, Doel 3 is out of operation due to severe safety issues stemming from more than 8,000 cracks found in its pressure vessel. Reactor 2 at Belgium’s Tihange nuclear power plant is affected by the same problem.” http://greenpeace.org/international/en/mid/news/Blogs/nuclear-reaction/17-nuclear-headaches/blog/51509/ (continues after related comments)

[Related: According to Spain’s CSN regarding Cofrentes, during the “refuelling outage in 2005, when minor leakage was discovered in the pedestal of the reactor vessel…. it was concluded that the defects found in the tubes were due to a localised process of degradation caused by stress corrosion cracking in the presence of contaminants (chlorine) apparently generally affecting all the tubes in the four quadrants, with differing degrees of damage….it was found that it was impossible to detect the defects until they had become through-wall defects.” ( See more in Note 2) Further note from the CSN Stress test that: “There are 2 large dams upstream from the plant site: the Alarcón dam, 170 km away on the River Júcar and with a 1182-hm3 storage capacity, and the Contreras dam, 106 km away on the River Cabriel and with a capacity of 852 hm3. Both dams are of the “gravity” type.” Their design basis seems cutting it close with little margin for error . (See more in note 3]

Greenpeace article continues:
“4. And close by, in the Netherlands, Greenpeace has reported safety issues on several occasions at the Borssele nuclear plant which has been functioning for more than 40 years.

5, 6. Germany’s Gundremmingen B and C reactors are also more than 30 years old and have suffered emergency shutdowns due to problems with valves and pipes. The difference is that Gundremmingen B will be shut down in 2017 and C in 2021 while Cofrentes has a licence to operate at least until 2022.

7, 8. The Tarapur 1 and 2 reactors in India are of a similar design and age as those that went into meltdown at Fukushima after the 2011 earthquake and tsunami. Warnings were given as long ago as 1995 that the Tarapur reactors should be shut down.

9. In the Czech Republic, we find the nuclear power plant of Dukovany. This plant’s operator wants to extend the four reactors’ operating lifetimes to up to 50. These reactors have had their power output increased like the Cofrentes reactors. Increasing the power output of a reactor can compromise its safety limits. For example, increased thermal energy production means more vapor and cooling water which causes greater tensions in the pipes and heat exchange systems, and therefore aggravates the aging processes.

10. Paks 2 in Hungary is also more than 30 years old. In 2003, it suffered a level 2 accident (INES scale). The cause was a fracture of the used fuel rods in its cooling storage pool, where there is no secondary safety containment. In 2009, Cofrentes also suffered an accident classified as level 1 when a fuel sub-element came loose and fell while it was being moved inside the storage pool for inspection.

11. Slovenia’s nuclear power plant at Krsko is also older than 30 years. Just like in the other plants, the physical aging of systems, structures and components run in parallel to aging technology. The design of the reactors only allows a limited implementation of new technology and safety concepts. Protection against earthquakes is insufficient, as is the case with Cofrentes.

12. Further to the north, in Sweden Forsmark 1 with a design similar to all these others, is older than 30 years. In 2006 there was a level 2 incident when the emergency backup diesel generators failed and a catastrophic Chernobyl-style meltdown was only narrowly avoided. As at Cofrentes, Greenpeace activists exposed the lack of security of the plant.

13. Valencia is just 100 kilometres away from Cofrentes, with a population of almost 800,000. Requena is 36 kilometres away with 21,000 inhabitants. Just like the Hartlepool nuclear plant in the UK which is also more than 30 years old and has highly populated towns in the vicinity.

14, 15. In Ukraine, the Rivne 1 and 2 reactors are older than 30 years. Their operators breached the Espoo Convention by not carrying out an environmental impact assessment (EIA) before finalising a periodic safety review that allows them to operate another 10 years. At Cofrentes, its lifetime extension plan was published on the same day as the Fukushima disaster began and without any public consultation.

16. Three years ago, when the Greenpeace action took place at Cofrentes, nobody could imagine what would happen just a month later in Fukushima – a nuclear disaster which is very far from over. Some of the Fukushima Daiichi reactors were supplied by General Electric just like Cofrentes. These reactors lacked filtered ventilation systems to help prevent radioactivity escaping in the event of an accident. Cofrentes is exactly the same.

At Fukushima, the institutions responsible failed because they were unable to recognize the risks, unable to reinforce safety measures when deficiencies were acknowledged, and unable to protect the population and the environment. Just like at Cofrentes.

17. Without doubt, the Santa María de Garoña nuclear power plant is Spain’s biggest headache. Not only is it – like Cofrentes – operated by the company Iberdrola, at 43 years old it is also the oldest in the European Union. Like the containment vessel in Cofrentes it was built by the same Dutch company as those in Belgium’s damaged Doel and Thiange reactors. It is now closed, but the Spanish government is looking to reopen it by modifying laws without public or environmental consultations. 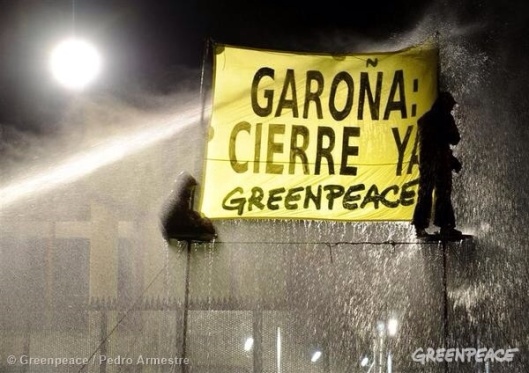 Greenpeace activists are sprayed with a power hose at the Garoña Nuclear Plant (11/20/2008 © Greenpeace / Pedro Armestre)
So there we have it – 17 nuclear headaches, one for each of the 17 Cofrentes activists who are being prosecuted for doing their civil duty. When it comes to nuclear power, public participation and consent is essential. Peaceful protest is a right.
Will you stand with the Cofrentes 17?

Raquel Montón is a nuclear and energy campaigner for Greenpeace Spain”
http://greenpeace.org/international/en/mid/news/Blogs/nuclear-reaction/17-nuclear-headaches/blog/51509/ (Emphasis our own; More images at the link.)

NOTES
[1] http://www.greenpeace.org/international/en/multimedia/photos/Stress-Tests-at-Forsmark-Nuclear-Plant/
[2] Note regarding Cofrentes that during the “refuelling outage in 2005, when minor leakage was discovered in the pedestal of the reactor vessel. Following a video-endoscope inspection, these leakages were determined to be from 7 insertion and 1 withdrawal lines of the hydraulic control rod drive mechanisms (CRDH), all located in quadrant 2 of the drywell penetration. As a result the plant replaced all the pipes in the affected quadrant. From root cause analysis and study of the operating experience of similar BWR plants it was concluded that the defects found in the tubes were due to a localised process of degradation caused by stress corrosion cracking in the presence of contaminants (chlorine) apparently generally affecting all the tubes in the four quadrants, with differing degrees of damage. The visual inspections performed on the piping in the other quadrants detected a layer of dust on the tubes and concentrations of chloride similar to those found on the tubes in quadrant 2, for which reason it might be assumed that the degradation phenomenon might have already begun or be incipient in certain of the tubes located in quadrants 1, 3 and 4. Furthermore, it was found that it was impossible to detect the defects until they had become through-wall defects. As a result, the plant decided to replace all the lines during the refuelling outage to be performed in 2007. Once this decision had been taken, and as the replacement of the piping inevitably implied subsidiary instrumentation cable and supports removal tasks,…” https://www.csn. es/index.php/en/about-csn/187-nuclear-power-plants/12767-cofrentes

[3] “The design basis regarding flooding considers the catastrophic rupturing of the Contreras dam (located 106 km upstream on the river Cabriel), coinciding with a flood caused by torrential rainfall of a magnitude equivalent to half the Maximum Probable Precipitation (MPP) and taking into account the effect of winds of 65 km/h causing waves in the mass of water. With this combination of events, the maximum height of the surface of the water would reach elevation 367.41 m, which is below the elevation of the plant grading level (372 m), as a result of which even in these conditions it would be possible to take the reactor to cold shutdown and maintain fuel pool cooling.

Also calculated has been the level of flooding due to the instantaneous rupturing of the Contreras dam, assuming the corresponding reservoir to be filled to its maximum level. The maximum height of the water reached at the site is 361.99 m and, considering the waves formed by the wind, would reach 363.49 metres.

In all cases the 400 kV switchyard located on elevation 348.7 m would be lost, which would cause the plant to shut down as contemplated in the design, without the SSCs located on the elevation of the plant grading level being affected. The 138 kV switchyard is located on elevation 372 m, as a result of which it would not be affected. Likewise, the off-site route followed by the 138 kV lines reaching the plant has been analysed, the conclusion being that these would remain available even in the event of the maximum flood contemplated by the design.

As regards the situation of the water table and its possible rising as a result of rainfall and flooding, the maximum design level is 362 m. It has been estimated that for the water table located below the buildings to reach the foundations due to in-seepage caused by the design flood, it would be necessary for the flood level to remain for six months. The water table is monitored monthly.

The cliff-edge situation postulated is a flood of unknown origin that reaches the plant grading level (372 m). In this situation, off-site power would be lost due to flooding of the 138kV switchyard, the plant then depending on the emergency diesel generators. The reactor could be taken to cold shutdown and cooling of the spent fuel pools could be maintained, since the flooding height of the safety-significant buildings is at least elevation 372.2 m. The duration of a flood is not expected to compromise the margins foreseen for the plant to maintain its safety functions with only on-site power supply.

The licensee describes the actions established in the Site Emergency Plan for flooding as a result of river swell or rainfall. The ultimate conclusion is that the natural layout of the site, along with the protections existing by design, guarantees the protection of the buildings, galleries and outdoor equipment against intense rainfall. The building roofs have been designed such that they are capable” From “Stress tests carried out by the Spanish nuclear power plants, Final Report” http://www.oecd-nea.org/nsd/fukushima/documents/Spain_ST_Final_National_Report.pdf