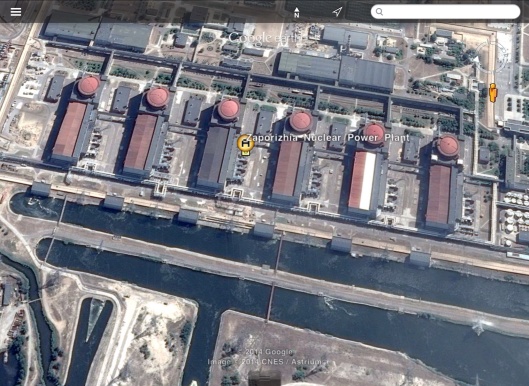 According to the Ukrainian government:
“On 28 of November 2014 at 19:24 the disconnection of the Unit №3 of Zaporizhzhya NPP from power grid occurred. According to the preliminary information the cause of the occurrence was the failure of electrical equipment in the turbine hall.” http://www.snrc.gov.ua/nuclear/en/publish/article/262451

According to the BBC, the Ukraine’s Energy Minister, Mr Demchyshyn, “said that damage to a transformer in a power-generating unit had triggered an automatic shutdown of one of the six 1,000 MW reactors… Mr Demchyshyn said that Ukraine will have to import power from Russia to tackle the energy shortage.” France’s IRSN stated that if there were an accident their sensors would pick it up. http://www.bbc.com/news/world-europe-30308857 “‘Fault’ shuts down Ukraine nuclear power plant“, 3 Dec 2014

According to France’s IRSN web site, they go to Chernobyl a few times a year and have some collaboration in Kiev, both of which are well to the north, as well as to the west of Zaporizhzhya Nuclear Power Station. The prevailing wind in Kiev was reported as from the direction north northeast, with snow, at the time of the incident and afterwards. So, how are they so certain that no radiation was emitted? They cannot be certain, unless they have a sensors in proximity and downwind to the reactor. If it were a huge accident then far away and downwind they could pick it up.

Prevailing wind direction was from the North North-East in Kiev – presumed location of ISRN – at time of the “Incident” at the Zaporizhzhya Nuclear Power Station, on the evening of November 28th, as shown with the yellow arrow. 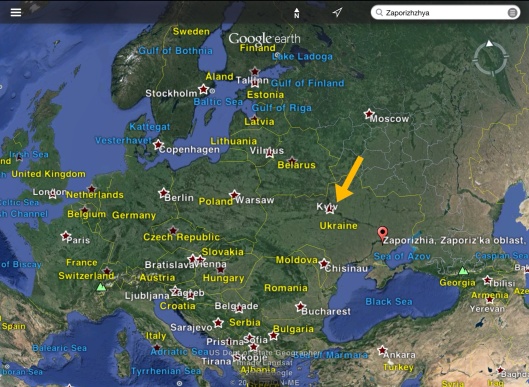 For those who wonder: the only Comprehensive Test Ban Monitor in Ukraine is seismic, not nuclear, and in Kiev. http://www.ctbto.org/tiles/pdf/CTBTO-Map-IMS-2014-12-05-All_Stations-Overview.pdf

Note that the Ukraine will have to import more energy from whom? Russia. It is worth noting that Ukraine had just built a huge solar farm in Crimea, which was to export energy to the rest of the Ukraine. But, now it belongs to Russia.

Three days before the incident at Zaporizhzhya Nuclear Power Station, the Zaporizhzhya National Training Center for training maintenance staff held a pilot course on a simulator “reactor”, a training course developed by French government owned AREVA! The group of students entered service personnel Energoremontnaya units (ERP), which engaged in maintenance and repair of the reactor. For the lesson they do real work on dismantling – assembling and transporting the upper block. Practical exercises on the simulator was preceded by theoretical training in the classroom. How to correctly perform the practical task and observed process – are watching consultants from the company AREVA,… (read the entire google translate text of Russian original below).

Now we have ascertained that just several days before the “incident” at Zaporizhzhya reactor number 3, people were being trained at the site – with a simulator and possibly also on a reactor – most likely reactor number 1, which seems to be undergoing, probably routine, maintenance until the end of the year. Nonetheless, there were students being trained at the site of this nuclear power station several days prior to and perhaps at the time of the incident.

Areva and EDF are 84% and 89% French government owned entities supervised by “l’Agence des participations de l’État“. They are not only siblings, but evil nuclear twins. http://fr.wikipedia.org/wiki/Agence_des_participations_de_l%27État
EDF and Russia were still partners in the Black Sea segment of South Stream up until Monday, and may still be for the new re-routed pipeline, or in other activities (such as importing Russian gas to France). So, they were definitely still business partners at the time of this incident, on Friday the 28th of November (one week ago). Furthermore, GDF-Suez, another evil French entity (1/3rd gov owned) and supervised by the same Agence is partnered with Russia’s Gazprom on Nord Stream. GDF-Suez CEO Gérard Mestrallet, AREVA CEO Philippe Varin and EDF Ceo Jean-Bernard Levy all went to the same elite school: École polytechnique. So, the business partner (Gazprom-Russia) to Areva’s siblings of EDF and GDF-Suez benefits from this nuclear outage.

Nonetheless, five of the reactors are around 30 years old with the 6th being 29 years old. http://en.wikipedia.org/wiki/Zaporizhia_Nuclear_Power_Plant So, there are plenty of things which could go wrong spontaneously, as well as with a little help of those in training (or workers) possibly screwing up, either accidentally or on purpose.

A group in the Ukraine has clearly pointed out the problem with these and other old reactors:
“As result of nuclear power plants ageing there is increase of violation cases such as minor leakages, cracks or short circuit… The first signs of ageing usually occur on a microscopic level of the material structure and often become apparent only after the materials are damaged” http://atom.org.ua/?en=public-comments-on-the-lifetime-extension-of-ukrainian-nuclear-power-plant-units

In 1997, the US government, resumed the “Principal Deficiencies” of this type of reactor. Some of these appear relevant, unless they have been improved upon:
“Substandard plant instrumentation and controls. Wiring of emergency electrical system and reactor-protection system does not meet Western standards for separation–control and safety functions are inter connected in ways that may allow failure of a control system to prevent operation of a safety system.

Fire-protection systems that do not appear to differ substantially from earlier VVER models, which do not meet Western standards.

Protection measures for control-room operators essentially unchanged from earlier VVER-440 Model V213 design, which does not meet U.S. standards. Unlike all U.S. nuclear plants, and most in Western countries. VVER-1000s have no on-site “technical support center” to serve as a command post for stabilizing the plant in an emergency. Technical support centers were incorporated in U.S. and many Western nuclear plants following the accident at Three Mile Island Unit 2 in 1979.

Operating and emergency procedures that fall far short of Western standards and vary greatly among opera tors of VVER-1000 plants.

Higher power densities and smaller volume of primary and secondary systems result in a somewhat less forgiving and stable reactor.” 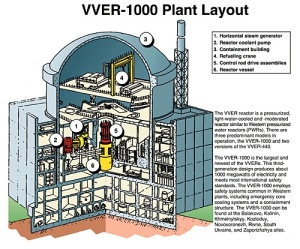 http://insp.pnnl.gov/-profiles-reactors-vver1000.htm (They have some favorable things to say, as well, although we question that workers got less radiation exposure, as opposed to under-reporting.)

As translated from the original Russian by Google Translate. Apparently it is not available in Ukrainian. We have opted to leave it as is to let the reader judge its meaning, with one exception noted at the end:
“On Zaporizhzhya National Training Center for training maintenance personnel excellent conditions
25/11/2014
The National Training Center maintenance staff held a pilot course on the simulator “reactor”. This is the last thing in the framework of the training course, developed by AREVA. Training is conducted by instructors of the training center of Zaporizhzhya NPP under the direction of the European Commission.

The group of students entered service personnel Energoremontnaya units (ERP), which is in the process of its immediate activities engaged in maintenance and repair of the reactor.
The lesson they do real work on dismantling – assembling and transporting the upper block.
Practical exercises on the simulator was preceded by theoretical training in the classroom. How to correctly perform the practical task and observed process – are watching consultants from the company AREVA, systems experts [1] and trainers training center Zaporizhzhya NPP, as well as colleagues from Khmelnitsky and Rovno NPP.

“I was first on the Zaporizhzhya NPP and the National Center. I confess that what he saw was very impressed – says Oleg Yahnovsky leading instructor of the training of maintenance personnel Rivne. – Everything here is as close to the real power unit, so train on this simulator is a pleasure. I think that the center is being built will be a good training base for training not only for the Zaporizhzhya NPP, but also other nuclear plants NAEC “Energoatom”. “Grandiose! – So one word described what he saw with the instructor Khmelnitsky NPP Mikhail Kovalchuk. – Everything is done with the mind. For training maintenance personnel created a unique environment.”

Once completed all pilot courses, instructors UTC will make the necessary adjustments to the training programs, develop new and in a year when the National Centre will be put into effect, will repair training”
We just put the text back into google translate and this time it said for the last sentence: “will begin training for maintenance personnel“.
[Note 1: Google translate said Methodists, but we changed it to systems experts. It could possibly be translated procedural experts, methodologist, managers, methodical, methods experts. We believe that they did NOT have religious missionaries there so that Methodist is not the correct translation!]

The Russian original is here. The word AREVA can clearly be seen: 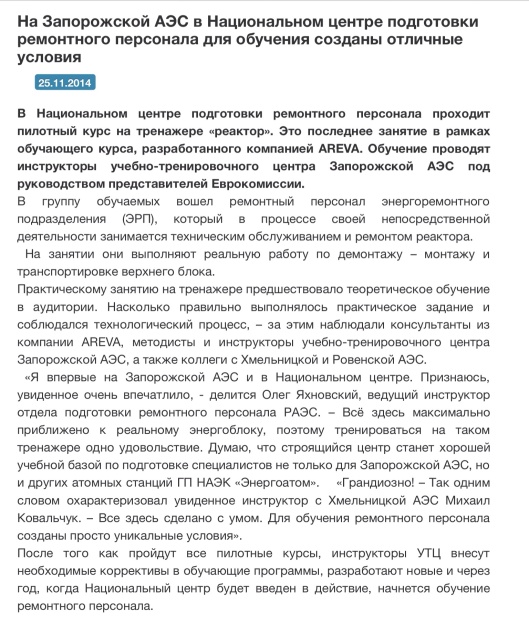 Ukraine energy minister says ‘no threat’ from accident at nuclear plant Posted:Wed, 03 Dec 2014 17:36:12 GMT
KIEV (Reuters) – An accident at a nuclear power plant in Zaporizhzhya in southeastern Ukraine poses no danger to health or the environment, energy authorities said on Wednesday, an assessment later corroborated by the French nuclear institute IRSN. http://feeds.reuters.com/~r/reuters/topNews/~3/lovQGkZyeoQ/story01.htm

Ukraine tells IAEA reactor safely shut down, no release
Posted:Wed, 03 Dec 2014 17:21:32 GMT
VIENNA (Reuters) – The U.N. nuclear agency said on Wednesday it had been told by Ukraine that a reactor at the Zaporizhzhya nuclear power plant remained safely shut down following a short circuit in the plant’s transformer yard last week. http://feeds.reuters.com/~r/reuters/topNews/~3/KKqU9fWI3A4/story01.htm

Regarding a 2009 incident: http://www.snrc.gov.ua/nuclear/en/publish/article/113041 In reponse to numerous requests, SNRCU informs about incident that occurred at Rivne NPP Unit 3 on 22 September 2009, 26 November 2009