For 41 years, from 1943 until March of 1984, shortly before the Bhopal disaster, Union Carbide left a radioactive mess, human and environmental, aka “legacy”, for which it has born inadequate liability – apparently almost none. [1] Much later, it was sold and now belongs to Dow Chemical. Union Carbide’s long-term role in the Nuclear Industry is conspicuously absent from both the wikipedia article and their web site.

Dow Chemical has its own nasty nuclear legacy, at Rocky Flats: “Contamination from fires and radioactive waste leakage plagued the facility under Dow’s management. In 1957 a fire burned plutonium dust in the facility and sent radioactive particles into the atmosphere“. http://en.wikipedia.org/wiki/Dow_Chemical_Company Dow is still involved in the nuclear industry (e.g. resins for Nuclear reactors), but this is the old Union Carbide’s story. 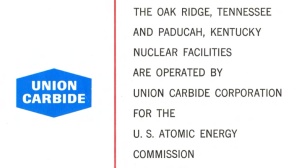 In 1999 there were Congressional hearings about the Paducah Nuclear Facility operated by Union Carbide from 1952-1984: “Over the years probably $1 billion has been spent to avoid liability, and all of it was taxpayer money… Billions of dollars was appropriated for cleanups… The testimony we will hear today will again address these historic problems and will show that at Paducah, workers and the environment are still not being protected. The workers are not being compensated, and the lack of action I believe is deliberate…” (US Rep Ron Klink of Pennsylvania, 1999, p. 279) [2] (Notice that money was appropriated, meaning that the US taxpayer paid and not Union Carbide or other contractors. The criticisms extend beyond Union Carbide and past 1984.)

For a short concise overview of the situation see: “An American Nuclear Tragedy“, 8:54 (less than 9 min): http://www.youtube.com/watch?v=l1BLMosusRI

Some pages from a 1962 document about Union Carbide’s First 20 Years as a US Nuclear Contractor, with our commentary added. It is most interesting to see them peddling the same nuclear crap in 1962, which they want us to think new in 2014, 52 years later. US taxpayers paid to research these things already. The nuclear industry wants more money for the same crap. Money needs to be for clean-up, not to create more radioactive mess. 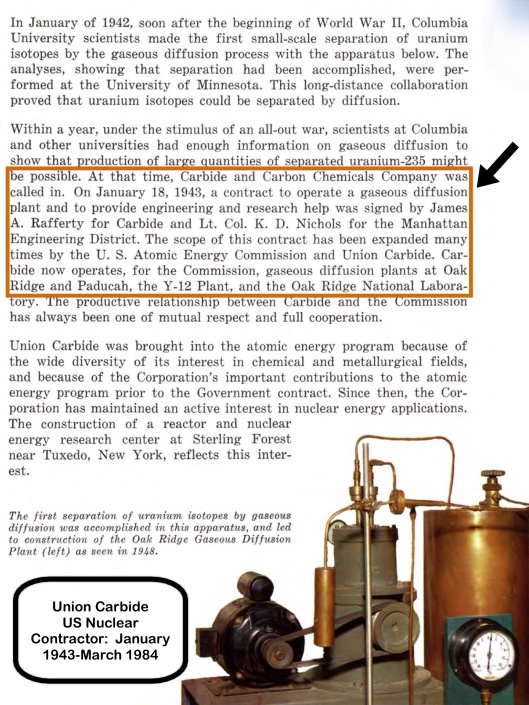 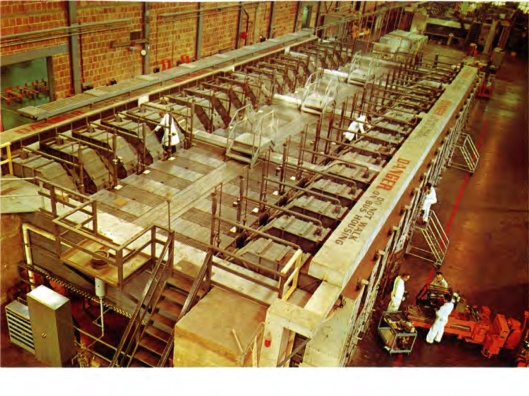 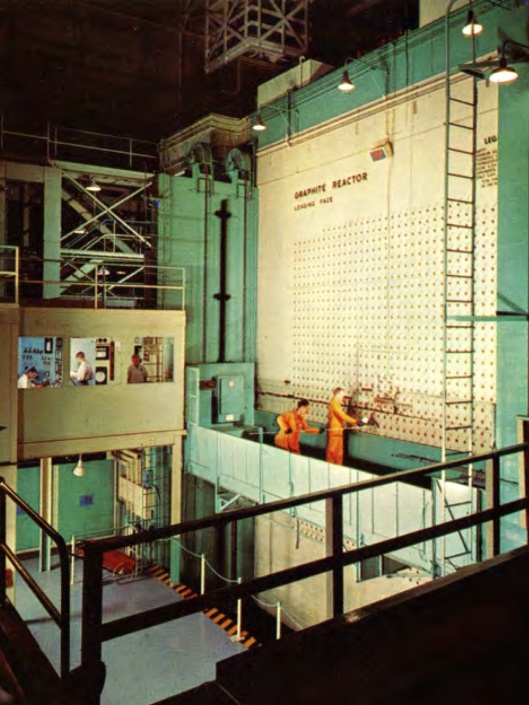 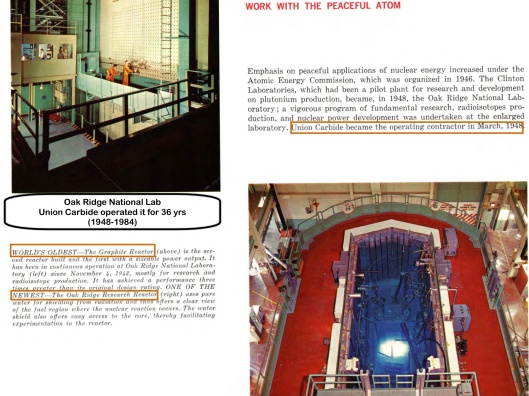 Those who believe that American victims would be better treated than those at Bhopal in India have missed that the US government has not given a damn about its own citizens within living memory, if ever. In fact, the US has shown itself very willing to let immigrants from India (and elsewhere) come work, while denying equally or better qualified Americans jobs (it’s called H1B) [3]. Unfortunately, overpopulation in India has further devalued the lives of everyone within India and in the rest of the world. Recall that the more rare something is, the more valuable and precious it is considered. That is true of humans too, and especially of workers. More people means lower wages. Insurance-risk management is usually based on your lost-income potential.

Have the victims of Bhopal been treated fairly? Surely not! But, to say that Americans would be much better treated, as alleged, is to ply cruel fantasies: “Bhopal demands justice 30 years after deadliest industrial disaster“, Wed, 03 Dec 2014 02:37:07 GMT http://feeds.reuters.com/~r/Reuters/worldNews/~3/vrJkEK4at4s/story01.htm

Notes:
[1] It is difficult to find out what Union Carbide did or did not pay for clean-up or to workers. Some judges have argued that they are protected from liability under the Price Anderson law. Regarding lack of payouts to injured workers some info here: http://en.wikipedia.org/wiki/Paducah_Gaseous_Diffusion_Plant
Apparently some nearby landowners received some compensation after long, drawn-out, legal battles: http://www.wise-uranium.org/epusec.html
“Price-Anderson also covers Department of Energy (DOE) facilities, private licensees, and their subcontractors including the USEC uranium enrichment plants, national laboratories and the Yucca Mountain nuclear waste repository. Any payments from the fund for accidents arising at DOE facilities come from the US treasury. The fund size for such installations is set by legislation (also at $12.6 billion), rather than being based upon the number of plants contributing to the fund“. http://en.wikipedia.org/wiki/Price-Anderson_Nuclear_Industries_Indemnity_Act

There is a new scheme, which will make the US liable in the event of Japanese nuclear accidents and vice versa: “Convention on Supplementary Compensation for Nuclear Damage” which may or may not have been approved by Japan. If approved it makes the US liable for accidents in Japan at 99 cents per Japan 42 cents, as well as Japan liable for US accidents at 42 cents per US 99 cents, and both liable for accidents in Morocco (where Rosatom is building a reactor), Argentina, and Romania. The pay in is based on how much (installed) nuclear power you have. After a certain amount of damages it kicks in, similarly to Price Anderson, it seems. It sounded like Moniz wants to make it retroactive. It lets all makers off the hook and leaves only the operator and taxpayers in signing countries liable.

[2]
US Congressional Hearings:
“SEPTEMBER 22, 1999
Paducah Gaseous Diffusion Plant
Witnesses testified about work practices at a Kentucky nuclear processing plant that allegedly exposed employees to radioactive sources and nuclear contamination and which led to several serious illnesses at the plant. They also discussed the management’s reactions to charges that the workplace was unsafe. close” C-span video: http://www.c-span.org/video/?152260-1/paducah-gaseous-diffusion-plant

Written transcript: “THE PADUCAH GASEOUS DIFFUSION PLANT: AN ASSESSMENT OF WORKER SAFETY AND ENVIRONMENTAL CONTAMINATION HEARING BEFORE THE SUBCOMMITTEE ON OVERSIGHT AND INVESTIGATIONS OF THE COMMITTEE ON COMMERCE
HOUSE OF REPRESENTATIVES, ONE HUNDRED SIXTH CONGRESS
FIRST SESSION, SEPTEMBER 22, 1999
Serial No. 106–87”
493 pp: http://www.gpo.gov/fdsys/pkg/CHRG-106hhrg61428/pdf/CHRG-106hhrg61428.pdf http://www.gpo.gov/fdsys/pkg/CHRG-106hhrg61428/html/CHRG-106hhrg61428.htm (Ron Klink statement is from this document).
Klink also notes that: “In many ways this hearing is the latest in a series of hearings that this committee has been holding for over 2 decades, and it is depressingly similar. In 1978 we heard from a cancer researcher who was fired by the DOE when he found unusually high cancer deaths among the workers of the Hanford Nuclear Weapons Facility. In 1988 we took testimony about failed safety programs, plants unsupervised by government owners, safety reports buried in back cabinets, safety regulations routinely ignored, and award fees that encourage contractors to hide safety problems from the government. In 1994 this subcommittee worked with the GAO to reveal that every year DOE was paying over $40 million to private law firms to keep from paying workers’ compensation claims and environmental damages that resulted from its contractors’ deliberately negligent behavior. Over the years probably $1 billion has been spent to avoid liability, and all of it was taxpayer money. We had some successes. Admiral Watkins and his tiger teams changed as much as possible in the DOE culture. The Whistle-blower Protection Act was passed to protect contract workers who came to Congress to talk about the problems. Billions of dollars was appropriated for cleanups. Independent oversight was instituted and hopefully will not be destroyed by the DOE reorganization recently approved by the House. But this is not enough. The testimony we will hear today will again address these historic problems and will show that at Paducah, workers and the environment are still not being protected. The workers are not being compensated, and the lack of action I believe is deliberate. As far back as 1952, the Department recognized that to avoid worker exposure to both uranium and small quantities of plutonium in recycled feedstock when used in the gaseous diffusion proc-essing system, the material should be maintained in a closed system, workers should have respiratory protection and protective clothing. They should never be allowed to work with open wounds. Every single one of these restrictions was violated at Paducah. Management was also told to determine where plutonium would go and whether it would concentrate and at what levels it would con-centrate. They did not“. (US Rep Ron Klink of Pennsylvania, 1999, p. 279) (Emphasis our own). These concerns are almost identical to those expressed in recent Hanford hearings.

[3] Contrary to what this author says, H1B visas took jobs away from Americans well before the economic downturn: http://www.dailykos.com/story/2009/03/02/703644/-I-Lost-My-Job-To-An-H1B-Today-Updated If it has gotten worse, perhaps it is because some US universities have branches in India so the students do most of their class work in India and then claim a US degree, facilitating their access to H1B visas. “The expanded use of H-1B and L-1 visas has had a negative effect on the workplace of Information Technology workers in America. It has caused a reduction in wages. It has forced workers to accept deteriorating working conditions and allowed U.S. companies to concentrate work in technical and geographic areas that American workers consider undesirable. It has also reduced the number of IT jobs held by Americans.” http://en.wikipedia.org/wiki/Dennis_Kucinich#Opposition_to_H1B.2FL1_visa_programs H1B visas generally go to those with no historic ties to the Americas. And, it’s not just a problem for IT workers. It impacts all US workers with Masters degrees and higher, and even educated Canadian workers who might otherwise work in the US under NAFTA. So, no more crap about Americans being treated better. Anyone who is now under the delusion that the so-called west treats its own people well has been in la-la land for some time, or is simply being abusive. Greece is the cradle of western civilization and see how its people are being treated, of late? The US Judicial system is the only branch of government occasionally holding up against corrupt corporate interests, and it is largely corrupted, and takes time and money to access.