A trend appears to be emerging with the US DOE and NRC – if they don’t like new USGS technical data showing increased risks at nuclear sites, then they ignore it. So, they are choosing to ignore a USGS study showing greater volcanic risk at Hanford – a study which itself ignores studies showing even higher risk. 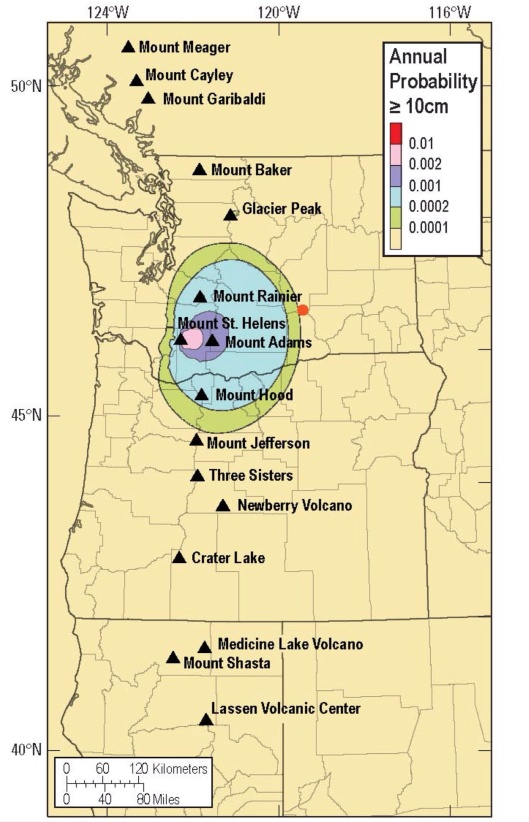 “Preliminary probabilistic tephra-hazard map for Pacific Northwest, revised from Hoblitt and others (1987) and Scott and others (1995). Contours show the estimated probability of the accumulation of 10 centimeters or more of tephra from eruptions of the 16 major volcanic centers (black triangles) in the Cascade volcanic arc. Contour pattern accentuates how Mount St. Helens’ explosivity and high eruption frequency dominate the probability analysis. Orange dot shows location of Hanford Waste Treatment Plant.” “addition of water from rainfall or snowmelt would provide additional load.” USGS-Hoblitt et. al. 2011 [1]

This follows on the heels of the US NRC spent fuel-waste confidence rule, which chose to ignore a USGS study showing increased risk of some earthquake types in western states, which could impact dams upstream from Hanford and the Columbia Nuclear Reactors, as well as the spent fuel at San Onofre, and Diablo Canyon in California. They are probably sad that the USGS does its job (somewhat), so they can’t follow the EPA’s M.O., which seems to be to simply not collect the data, as is apparent by both the locations (often far from nuclear facilities) and almost non-existence of the EPA radiation network.

More clearly imminent are the risks of dam failures upstream from nuclear facilities which could cause a tsunami like situation, which should be brought home by the recent 65 foot crack in the Wanapum Dam upriver from both Hanford and the Columbia Nuclear Power Station, and the more recent sinkhole-leakage of the Boone Reservoir dam, which is upstream from 3 TVA Nuclear Power Stations. This risk appears still unaddressed and would seem to require thick, high, ultra-resistant tsunami walls, if there is a solution. Recall that the catastrophe caused by Hurricane Katrina in New Orleans was actually an issue of dam safety and included a failure to take into consideration well-known subsidence. [2]

According to the DEFENSE NUCLEAR FACILITIES SAFETY BOARD (23 Oct. 2014):
“In 2011, the United States Geological Survey (USGS), as requested by DOE-ORP, provided a new analysis for a volcanic ashfall event at the Hanford Site [1]. As this was a significant change in natural phenomena hazard (NPH) assessment methodology and site-specific information, DOE Order 420.1B, Facility Safety, required the site NPH assessment to be updated. In January 2013, Bechtel National, Incorporated (BNI) identified NPH mitigation deficiencies in the existing WTP structural, ventilation, and emergency power designs due to the updated assessment [2]. However, in March 2014, DOE-ORP requested BNI stop work on the ashfall control strategy and continue to solve open technical issues with the 1996 ashfall analysis in the safety basis.” (See entire document at bottom) http://www.dnfsb.gov/sites/default/files/Board%20Activities/Reports/Staff%20Issue%20Reports/Hanford/2014/sir_20141023_25386_18.pdf

What or rather who changed since then? That would be a new head of the DOE – Ernest Moniz, MIT pro-nuclear theoretical physics prof with a Brazilian born Japanese wife. Shall we underline theoretical, as opposed to practical? Has anyone wondered what family or other ties Moniz’ wife (Naomi Hoki) does or does not have with either the Japanese government or the Japanese nuclear industry? Recall that Japan has nuclear reactors in even closer proximity to major volcanos and has even gone as far as proposing that a deep geological dump for nuclear waste be placed within a major volcanic mountain range! From what we’ve seen thus far with nuclear advocates, they probably want to SEE what happens when you stick nuclear waste in a volcano – like boys who torture small animals to see what will happen. Common sense tells us that when a volcano blows, so too would that nuclear waste! There is no room for pie in the sky or mad scientist nuclear theory. A serious, concrete, approach is needed.

Unfortunately, the concern of the Defense Nuclear Facilities Safety Board also appears to end with the construction of the new High Level Waste-Vitrification Facility and not address the existing nuclear facilities, including the Columbia Nuclear Power Station, which would also be at risk.

The 2011 USGS document, itself, admits to ignoring a Smithsonian study which makes the risk potential even higher!
“As discussed above, the probability of a Cascade eruption in the high range of VEI 6 or larger in the near future is negligible, so such events are not considered in the following analysis. On average, VEI 4 eruptions have an annual global probability of about 0.5—one about every 2 years; VEI 5 eruptions about 0.08—a little less than one per decade …. Two of the events we include have been categorized elsewhere as VEI 6. The largest known eruption of St. Helens is the Yn eruption, which occurred about 3,800 years ago (Mullineaux, 1996). This eruption is categorized in the Smithsonian Institution’s global catalog as VEI 6 (Siebert and others, 2010),…” From the “Conclusion”: “The tephra accumulation thickness that would be equaled or exceeded at the Hanford Waste Treatment Plant at the 1 x 10-4 annual probability level is estimated to be about 10 cm…” Furthermore, the “addition of water from rainfall or snowmelt would provide additional load“. Hoblitt et. al., 2011 (Emphasis added). Hoblitt, R.P., and Scott, W.E., 2011, “Estimate of tephra accumulation probabilities for the U.S. Department of Energy’s Hanford Site, Washington: U.S. Geological Survey Open-File Report 2011-1064“, 15 pp. [http://pubs.usgs.gov/of/2011/1064/]. http://pubs.usgs.gov/of/2011/1064/of2011-1064.pdf http://volcanoes.usgs.gov/ash/index.html (10 cm is 3.94 inches.)

In “Review of Natural Phenomena Hazard (NPH) Assessments for the DOE Hanford Site“, Snow and Ross, 2011 remark that: “The USGS has recently released a new ashfall hazard study in Open-File Report 2011-1064… While this report shows substantially similar predicted thicknesses and probabilities for the ashfall hazard as was previously used in HNF-SD-GN-ER-501, the associated ash density is higher than previously assumed, resulting from the clarification that predicted thicknesses related to compacted rather than uncompacted ash. This will result in significantly higher structural loading than previously identified./ Design criteria have been requested for airborne concentration of ash. The new USGS report does not provide any direct basis for derivation of airborne concentration; assumptions are necessary to make this development.“(p. 5) From the Summary: “Clarifications to ashfall hazard assessment in USGS Open-File Report 2011-1064 result in higher ash loads than previously indicated. It is recommended that the volcanic hazard assessment and design criteria be updated.” (p. 11) “Review of Natural Phenomena Hazard (NPH) Assessments for the DOE Hanford Site” Snow, Robert L.; Ross, Steven B., 2011-09-15, PNNL-20684 Rev.1 830403000; TRN: US1105781, DOE contract no. AC05-76RL01830, Research Org: Pacific Northwest National Laboratory (PNNL), Richland, WA (US), Sponsoring Org: USDOE http://www.osti.gov/scitech/biblio/1025685/ (Emphasis our own.)

Volcanic preparation leaflets tell everyone some general points which happen to be relevant to the needs of nuclear facilities: “Keep ash out of buildings, machinery, vehicles, downspouts,water supplies, and wastewater systems (for example, storm drains) as much as possible. The most effective method to prevent ash-induced damage to machinery is to shut down, close off or seal equipment until ash is removed from the immediate environment, though this may not be practical in all cases.” http://www.ivhhn.org/images/pamphlets/Preparedness_Guidelines_English_WEB.pdf
“Ashfall can cause contamination of water, damage of water supply equipment, and power cuts.” http://www.ivhhn.org/images/pamphlets/ashleaflet_en.pdf

Recall that nuclear facilities require electricity, oddly enough, along with cooling water: “After shutting down, for some time the reactor still needs external energy to power its cooling systems. Normally this energy is provided by the power grid to which that plant is connected, or by emergency diesel generators. Failure to provide power for the cooling systems, as happened in Fukushima I, can cause serious accidents./Nuclear safety rules in the United States “do not adequately weigh the risk of a single event that would knock out electricity from the grid and from emergency generators, as a quake and tsunami recently did in Japan”, Nuclear Regulatory Commission officials said in June 2011.“[3] 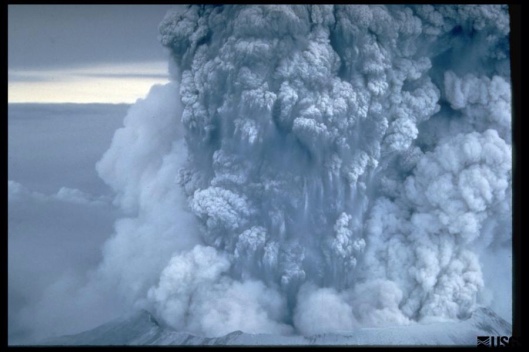 “Ash plume (close up) from May 18, 1980 Mount St. Helens. Plume moved eastward at an average speed of 60 mi per hour (95 km/hour), with ash reaching Idaho by noon.” http://volcanoes.usgs.gov/volcanoes/st_helens/st_helens_gallery_23.html 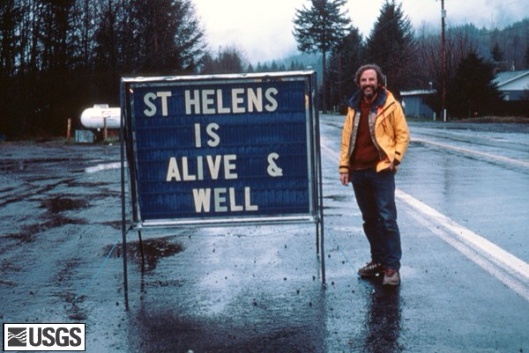 Five Cascade volcanic centers lie less than or close to 200 km of the Hanford Site and, except for Glacier Peak, lie at azimuths that have the highest probabilities (0.14–0.18) of being upwind. Glacier Peak and St. Helens have produced more than one substantial explosive eruption in the recent geologic past, Rainier one, and Adams and Hood none.”
[….]
“We use a subset of 13 VEI 4 to 5 events from this compilation for which there exist measurements of fallout thickness at 200 km from the volcano, the approximate distance from Mount St. Helens to the Hanford Site. We add a fourteenth event by including measurements of tephra fallout at 200 km for the 1982 eruption of El Chichón, Mexico, (Varecamp and others, 1984) to the more proximal measurements given in Newhall and Hoblitt (2002).”
[….]
“As discussed above, the probability of a Cascade eruption in the high range of VEI 6 or larger in the near future is negligible, so such events are not considered in the following analysis. On average, VEI 4 eruptions have an annual global probability of about 0.5—one about every 2 years; VEI 5 eruptions about 0.08—a little less than one per decade (fig. 2 in Newhall and Hoblitt, 2002).”
[….]
“Two of the events we include have been categorized elsewhere as VEI 6. The largest known eruption of St. Helens is the Yn eruption, which occurred about 3,800 years ago (Mullineaux, 1996). This eruption is categorized in the Smithsonian Institution’s global catalog as VEI 6 (Siebert and others (2010)“. Excerpts from USGS-Hoblitt, R.P., and Scott, W.E., 2011, “Estimate of tephra accumulation probabilities for the U.S. Department of Energy’s Hanford Site, Washington: U.S. Geological Survey Open-File Report 2011-1064“, 15 pp. [http://pubs.usgs.gov/of/2011/1064/].

NB: All bold above is our own. 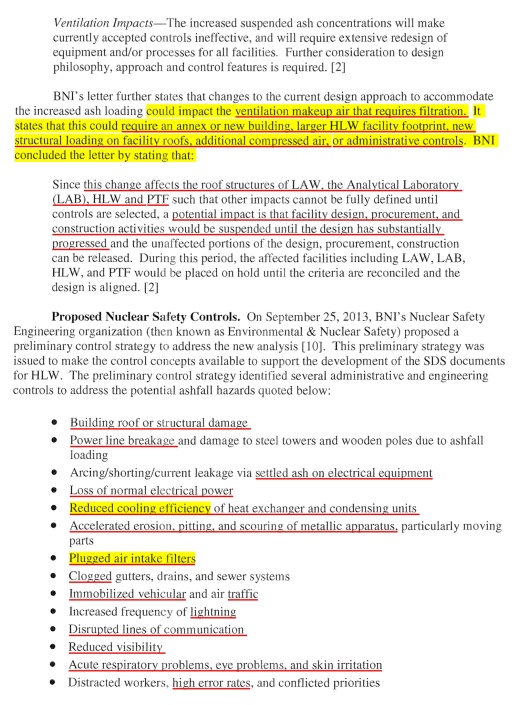 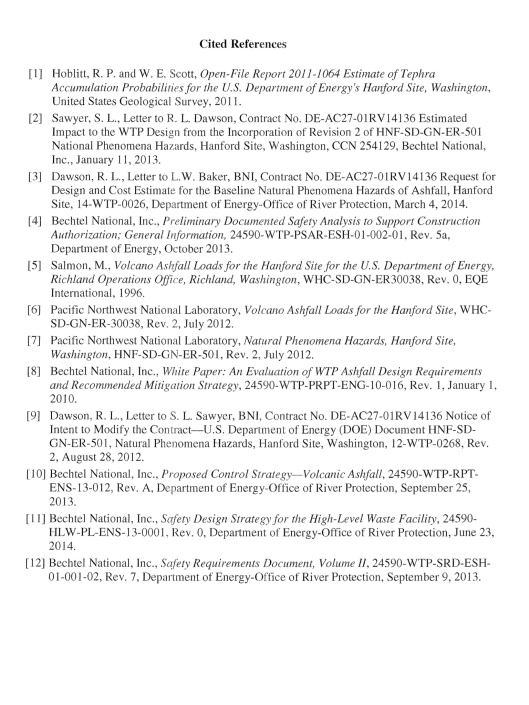 NB: Yellow Highlight and Red Underline is our own. Although we understand the use of agency seals to be allowed when they appear on official documents, we have opted to blur the seal to be on the side of caution.