“If the war with Germany had been won, it was because of the immense sacrifices made by the Soviet Union, the massive involvement of the United States and the active participation of the colonial empires. France and Great Britain thus owed much to the USSR and the United States, not to mention the colonies. In fact, their position as victors was on a European rather than an international scale.” (p. 72)”Africa and the Second World War, Report and papers of the symposium organized by Unesco at Benghazi, Libyan Arab Jamahiriya, from 10 to 13 November 1980“, © Unesco 1985 (158 pp.)

Thomas Sankara, Burkina Faso’s former leader assassinated by Blaise Compaoré in 1987, has become news again this week, as Blaise has departed. Sankara’s “father fought in the French army during World War II and was detained by the Nazis.” http://en.wikipedia.org/wiki/Thomas_Sankara 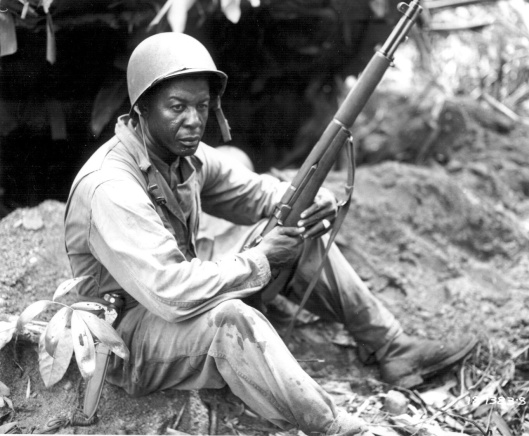 “During the 50th anniversary of World War II, as we honor those Americans who undauntedly and courageously contributed to the defense of our nation, often overlooked in our remembrances are the valiant efforts of African Americans. Throughout the war years they repeatedly had to battle adversaries on two fronts: the enemy overseas and racism at home.” http://www.archives.gov/research/african-americans/ww2-pictures/

“Africa’s part in the defeat of Germany

The First World War had already given proof of the efficiency of colonial soldiers, and the Senegalese infantrymen had already acquired a reputation in Germany, particularly as they occupied the Rhineland after the war, in face of widespread indignation by the Germans who interpreted this as an act of treason by France with regard to the entire white race. Hitler himself often remarked that ‘coloured men’ should not be involved in conflicts between whites and described the use of black troops in Germany as sadism.

The Second World War only strengthened the French and British resolve to use their colonial empires to the full in a confrontation with Germany. Thus, as early as 1940, French West Africa supplied 127,320 infantrymen, French Equatorial Africa 15,500 and Madagascar 34,000. This was only the beginning of war operations. The African continent did not experience any major military operations, except in North Africa where hostilities raged until the capitulation of the Axis armies in 1943.

However, Africans enlisted in the French, British, Italian and other armies fought not only in Africa, but also in France, Germany, Italy and on other European fronts, as well as in the Middle East, Indo-China, Burma, and elsewhere. It can therefore be said that Africa played an active role in the Allied Forces’ war effort through an active presence on the battlefields within Africa and elsewhere. It should not be forgotten, however, that Italy—then a colonial power—also mobilized troops from Africa, and on 10 June 1940, the Italian forces in East Africa represented some 300,000 men, 200,000 of whom were Africans.

When, on 26 August 1940, French Equatorial Africa went over to General de Gaulle, Colonel Leclerc made arrangements to take over command of the colony’s troops, and when he arrived in Largeau on 16 December the force consisted mainly of the Régiment de Tirailleurs Sénégalais du Tchad (RTST), later called the Régiment de Marche du Tchad (RMT). It was this army which took possession of Fezzan in December 1942. The troops from the French colonies in Africa then took part in the liberation of Corsica in September-October 1943, in the campaign in Italy, with the entry into Rome on 15 June 1944, and in the campaign in Provence in August 1944, before moving northwards to join up with the rest of the French army.

It should also be noted that the battle for El-Alamein, which started on 1 July 1942 with an offensive by Rommel’s Afrika Korps, marked one of the most important turning-points in the war. The Axis defeat at El-Alamein was
Black Africa and Germany during the Second World War but the start of events that led to general capitulation throughout North Africa in 1943, made possible by the November 1942 Allied landing. Ideological considerations had swayed Hitler and had led him to aim first at military victory in the East with the crushing of the USSR , before turning his full attention to fronts such as the Mediterranean, particularly as he was relying on blitzkrieg tactics to achieve a decisive victory.

By neglecting the North African front, against the advice of some of his generals, Hitler facilitated the task of the Allies who took over control of the Mediterranean area and Africa in May 1943, an advance that was further consolidated by the ousting of Mussolini in July, and Italy’s signing of an armistice with the Allies in September.

The African continent provided an ideal support base for the Allied troops. In 1942, for instance, 2,994 aircraft landed at Fort Lamy Airport, and a further 6,944 flew over that base towards the Libyan front, or the eastern front, via Bassorah. This was a key strategic advantage which could also be seen in other African regions under British or Free French control. Once the Germans had been driven out of North Africa, the Suez route fulfilled its role as lifeline to the British Empire once more, and made it possible for the necessary supplies from the colonies and dominions to be shipped through. The British presence in East Africa secured key strategic advantages in the Indian Ocean, and control of the Cape route, by an Allied presence in South and southern Africa, strengthened these advantages that were as much economic as strictly military.

Indeed, the control of Africa made it easier to ship through to the European fronts the reinforcements and supplies not only from the British and French colonial empires but, most important of all, after 1943, from the United States of America. It has been established that at the outbreak of the war, of the twenty essential wartime primary products (coal, oil, cotton, wool, iron, rubber, copper, nickel, lead, glycerine, cellulose, mercury, aluminium, platinum, antimony, manganese, asbestos, mica, nitric acid and sulphur), Great Britain had shortfalls in everything but coal. As long as she controlled the sea lanes, however, she could procure such products from her empire, or after 1943 from the United States.

It is noteworthy that it was on African soil, in Algiers, that General de Gaulle, on leaving London, set up the French Committee for National Liber-ation on 3 June 1943 (to become, a year later, the Provisional Government of the French Republic). With its Consultative Assembly, delegates from the home country and representatives of the overseas territories were able to meet in this skeleton parliament. Thus, in 1943 the French Empire was reunited, with the exception of Indo-China and Kuang-Chou, and to a certain extent Syria and the Lebanon (the end of the mandate over these countries was officially recognized in December 1943). So it was in Africa that France, totally occupied by the Germans since the Allied landing, formed once again a free government
with extensive territories and considerable resources. This encouraged more and more French people to join the resistance, led to the creation of the Organi-sation de Résistance de l’Armée (ORA ) and compelled the Americans to take an interest in the French resistance and give it material support.” (Emphasis added), Extract (pp. 70-71)from “Black Africa and Germany during the Second World War, by A . Kuin’a Ndumbe III, in “Africa and the Second World War, Report and papers of the symposium organized by Unesco at Benghazi, Libyan Arab Jamahiriya, from 10 to 13 November 1980“, Unesco, © Unesco 1985 (158 pp.) http://unesdoc.unesco.org/images/0006/000651/065161eo.pdf

Africa’s Natural Resources from the Vantage of 1980

The West’s interest in Africa’s oil has also significantly increased, partly in proportion to the political uncertainties surrounding the Middle Eastern suppliers. Had Nigeria joined the Arab oil embargo of the United States in 1973, the consequences for America would have been severe. In 1974—the year following the embargo—the United States’ balance-of-payments deficit with Nigeria was already $3 billion, rising to $5 billion two years later. For the time being America’s dependence on Nigerian oil continues to be critical.

There is also Africa’s agricultural potential. The Sudan, Africa’s largest country, may indeed develop into a major bread-basket for parts of Africa and the Middle East before the end of the century. More effective irrigation would facilitate full exploitation of the impressive fertility of this part of the continent.

Then there are Africa’s water resources, with some of the greatest rivers of the world. Potentialities for building dams and generating hydro-electric power have only just begun to be exploited. Solar energy for domestic and public purposes is still in its infancy. But it should be remembered that Africa is the most exposed of all continents to the sun. The equator cuts through its middle, and it is the only continent bisected by both the Tropic of Cancer and the Tropic of Capricorn. Tapping solar energy in Africa, once the technique becomes sophisticated, could be an additional source of power and energy.

With regard to uranium, Africa’s resources may be significantly greater than at present estimated. One country that became a uranium-producing state fairly recently is Niger, formerly a French colony.

Against this background of mineral, agricultural and other resources in Africa there is also the disconcerting fact that Africa has some of the least developed countries in the world. The overwhelming majority of the countries that the United Nations regard as the ‘poorest’ in the world are in fact in Africa. They range from Upper Volta (now Burkina Faso) to Rwanda and Burundi and from Somalia to Tanzania. The continent itself seems to be well endowed with resources, but a disproportionate number of people on the African continent are undernourished and underprivileged. A situation where a continent is well endowed but the people are poor is a situation of anomalous underdevelopment. A substantial part of the explanation lies in the nature of Africa’s economic interaction with the Western world. And a major stage in that interaction was the Second World War and its distorting consequences.” (Emphasis added) From: “Africa and the legacy of the Second World War: political, economic and cultural aspects” by Ali A . Mazrui in http://unesdoc.unesco.org/images/0006/000651/065161eo.pdf (pp. 19-20)
“Africa and the Second World War , Report and papers of the symposium organized by Unesco at Benghazi, Libyan Arab Jamahiriya, from 10 to 13 November 1980, Unesco, © Unesco 1985 (158 pp.)
French version: http://unesdoc.unesco.org/images/0019/001925/192582fo.pdf
See also: http://en.wikipedia.org/wiki/French_West_Africa