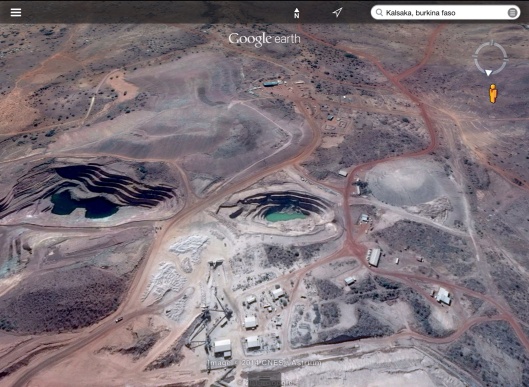 Mine in Burkina Faso: probably Kalsaka gold mine. It is huge.
As of 2012, there were 6 gold mines in Burkina Faso. It was ranked third for gold exploration in Africa and was the fourth largest gold producer in Africa. Around half of Burkina Faso’s exports are gold (presumably export revenue). http://en.wikipedia.org/wiki/Mining_industry_of_Burkina_Faso
But,”Burkina Faso has one of the highest levels of poverty in the world. Almost half the country’s population lives below the poverty line. ” http://www.unicef.org/bfa/english/4453.html 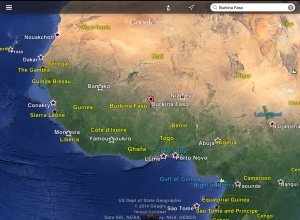 As long as people continue to purchase gold and invest in mining companies; as long as there is a nuclear power and weapons industry using uranium; as long as there continue to be countries manufacturing armaments and arms dealers, neither peace nor prosperity can be expected in Burkina Faso, nor in most of Africa.  The purchasing of military equipment contributes to the debt.  Debt, of course, encourages the siphoning off of resources, such as gold. Additionally, it appears that Burkina is also being used as a base for both French and US Special Ops.  Nonetheless, the departure of Compaoré in Burkina Faso is a historic moment.  Unfortunately, Plus ça change, plus c’est la meme chose.

Even still, bravo to those demanding democratic process:
“No to the Senate; No to the Referendum; No to the Revision of Article 37 [of the constitution, which would allow the president for the last 27 yrs to run again].  Not one step without the people! (Thomas Sankara)”

“Formerly called the Republic of Upper Volta, the country was renamed “Burkina Faso” on 4 August 1984 by then-President Thomas Sankara, using a word from each of the country’s two major native languages, Mòoré and Dioula. Figuratively, Burkina, from Mòoré, may be translated as “men of integrity”, while Faso means “fatherland” in Dioula. “Burkina Faso” is understood as “Land of upright people” or “Land of honest people.” http://en.wikipedia.org/wiki/Burkina_Faso
“In 2012, there are 6 gold mines in Burkina Faso. It is the 3rd biggest site for gold exploration in Africa and 4th biggest gold producer in Africa“. http://en.wikipedia.org/wiki/Mining_industry_of_Burkina_Faso

Strange thing is that around half of the people are in poverty and around half of its exports is gold. But, the World Bank, when speaking of Burkina’s “Debt Performance”, talks of cotton, and not a word is found about gold: “May 2008, GOVERNMENT DEBT MANAGEMENT PERFORMANCE REPORT – BURKINA FASO“. https://openknowledge.worldbank.org/bitstream/handle/10986/16229/603570WP0BF0EN10BOX358315B01PUBLIC1.pdf?sequence=1 (We did not read the document in its entirety but rather searched for key worlds such as gold, zinc, mine, mining).

Burkina Faso was well-known to be a gold-mining country in the 1980s and the gold mining INCREASED GREATLY since then: “Gold mining has increased greatly since the mid-1980s and, along with cotton, is a leading export money-earner” (48% of exports in 2009) http://en.wikipedia.org/wiki/Economy_of_Burkina_Faso

Last June Reuters informed us that from 2007 to 2010, “For mineral-rich Burkina Faso, a west African gold producer, 100 percent of its exports to Switzerland over this period, accounting for 15 percent of all exports, also ‘vanished“. “AFRICA INVESTMENT-The Swiss commodities connection in African poverty,” Fri, 27 Jun 20, 2014, (Reuters) http://feeds.reuters.com/~r/reuters/basicmaterialsNews/~3/WtLwplrvvTI/africa-investment-idUSL6N0P83NG20140627 They appear to mean the gold exports and not cotton.

Switzerland, by the way, will soon vote as to whether to have more gold backing to its currency.

While some of us are as happy to see Compaoré – murderer of his best friend, Thomas Sankara – step down, as we were to see Haiti’s Duvalier die, it is unlikely that either event will do anything to improve the situation of these tiny countries.
Thomas Sankara: Not One Step without the People

Cropped from: http://azls.blogspot.com/2014/10/burkina-faso-explosion-populaire.html (Copyleft)
“On October 15, 1987 Sankara was killed by an armed group with twelve other officials in a coup d’état organised by his former colleague, Blaise Compaoré. Deterioration in relations with neighbouring countries was one of the reasons given, with Compaoré stating that Sankara jeopardised foreign relations with former colonial power France and neighbouring Ivory Coast. Prince Johnson, a former Liberian warlord allied to Charles Taylor, told Liberia’s Truth and Reconciliation Commission (TRC) that it was engineered by Charles Taylor…. Sankara’s body was dismembered and he was quickly buried in an unmarked grave,…” http://en.wikipedia.org/wiki/Thomas_Sankara

Sankara tried to fight corruption. He sold off the country’s fleet of Mercedes, that car so beloved by corrupt Africans,

at least before the corrupt became enamored with private planes,

and Sankara replaced them with tiny Renault 5 cars (bicycles didn’t go over well).

He tried to improve the situation of women in the country. http://en.wikipedia.org/wiki/Thomas_Sankara
Thomas Sankara, speaking here at the African Unity Conference of 1987, shortly before his assassination, about Burkina’s debt: http://youtu.be/DfzoToJEnu8 http://youtu.be/9VZEkURD9oI He explains why he thinks that Burkina should not and cannot pay the debt – nor should most of Africa. He asks them to be in solidarity against paying the debt, lest they be individually assassinated. He prophetically states that if Burkina alone refuses to pay then he will not be there next year. He points out that the bankers won’t die if they don’t get their money, but people in Africa will. It sounds like the debt has its roots in the colonial period. He points to the important and unrecognized role that African troops played in stopping Hitler. He urges the African leaders to stop buying weapons, because they are only used against other Africans (and increase debt). He points out that those who exploit Africa, also exploit their own countries. You have only to look at the 2008 crisis or tour around looking for surface mines on google earth, if you don’t live near one, to see that this is true. While he appears to be speaking of the third world debt crisis, the stock market crisis of 1987 started on the 14th of October 1987 and bottomed out Monday the 19th of October. He was assassinated on the 15th of October. http://en.wikipedia.org/wiki/Black_Monday_(1987) From a comment made in one of the videos, African presidents were already fans of airplanes. Some have argued that airplanes are a necessity due to lack of infrastructure, but that seems fairly debatable.

We the Youth of Burkina Faso protest today against:  the referendum and the modification of Article 37. We demand the unconditional retraction of this law proposal; Deputies (Parliament Reps) together let’s save the people!
http://azls.blogspot.com/2014/10/burkina-faso-explosion-populaire.html (Copyleft)

In Current News from Reuters:
“UPDATE 1-Lieutenant Colonel Zida says taking power in Burkina Faso Posted:Fri, 31 Oct 2014 23:13:00 -0400
OUAGADOUGOU, Nov 1 (Reuters) – Lieutenant Colonel Issaac Zida said on Saturday he was taking over as head of state in Burkina Faso, in an apparent putsch against the military chief of staff Honore Traore who had earlier said he would lead a transition.” http://feeds.reuters.com/~r/reuters/basicmaterialsNews/~3/SqmIq4kQPGE/burkina-politics-idUSL5N0SR01Z20141101

http://azls.blogspot.com/2014/10/burkina-faso-explosion-populaire.html (Copyleft)
“Burkina Faso: explosion populaire, soulèvement démocratique
Burkina Faso: Popular Explosion, Democratic Uprising
Ouagadougou, 29 Oct. 2014 (Corresp.)-
The protest by the Burkinabé people in Ouagadougou degenerated on the 28th of October 2014 into urban conflict, when the demonstrators left the National Square (la Place de la Nation) in the direction of the UN roundabout with the goal of going to the National Assembly to occupy it.

After several minutes of a sit-in and peaceful occupation of the UN round-about by the protestors, the police attacked and threw tear gas and water cannons on the demonstrators.

The police pick-up trucks chased the protestors, firing teargas grenades on them, sometimes at close range. There were wounded, but there were no deaths reported. The protest assembled hundreds of thousands of protestors in Ouagadougou, almost a million according to its organizers. The opposition parties to the CDP (Party in Power) called for this protest to be characterized by: civil disobedience until the fall of the regime. The President of Burkina Faso, Blaise Compaoré, hopes that the vote of Thursday 30 October at the National Assembly would permit him to change article 37 of the Constitution without holding a referendum and thus to present himself for his own succession in the presidential election of 2015.
Based on our translation of an article by Basta! يكفي , in French, posted on 30 October 2014 at: http://azls.blogspot.com/2014/10/burkina-faso-explosion-populaire.html Images from the same site. (Copyleft) (Emphasis added)

Protestor tells Compaoré to get out! 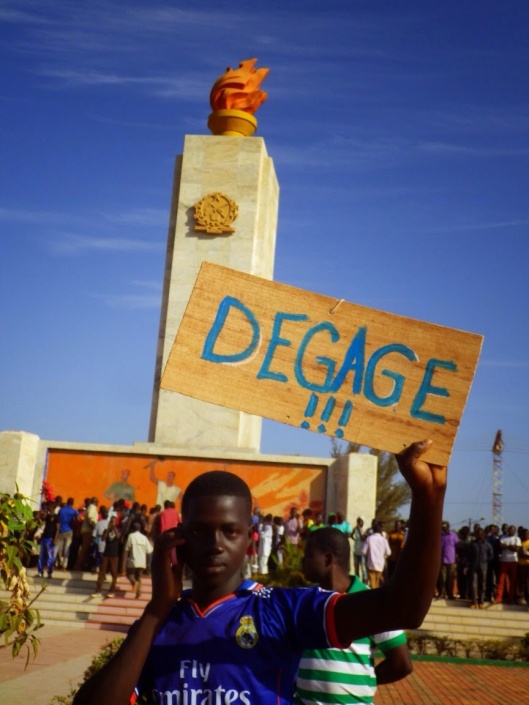 http://azls.blogspot.com/2014/10/burkina-faso-explosion-populaire.html (Copyleft) If only the exploiters would get out and give Africa a chance.

Interesting that earlier inhabitants didn’t want to mine the gold. They considered it dangerous. Indeed gold is dangerous in many ways – gold itself is actually toxic, upon ingestion (at least over time), for starters; mercury or cyanide is often used for processing; and it draws the greedy-robbers. So, yes, gold IS a dangerous substance and all the more so since it is now mined open-pit, causing deforestation and surely bringing desertification in its wake, and of course, acid mine drainage.
“The present-day populations of southern Burkina who have settled there since the eighteenth century do not know who was mining gold prior to their arrival, and many of them have not been involved in gold mining at all due to conceptions of gold as a dangerous substance.” from the Abstract of “GOLD MINING AND JULA1 INFLUENCE IN PRECOLONIAL SOUTHERN BURKINA FASO” by KATJA WERTHMANN, The Journal of African History / Volume 48 / Issue 03 / November 2007, pp 395-414

Of related interest – It appears that both France and the US have been using Burkina Faso for special military operations:
Thursday, 30 Oct. 2014
Burkina Faso: France should officially drop its old friend Blaise Compaoré by Survie, 29/10/2014, In Burkina Faso, Blaise Compaoré renews the tradition of changing the Constitution to stay in power. The protestors against this project multiply, tension is mounting, and repression is feared. France, which supported the regime of “beautiful Blaise” for 27 years, should publicly condemn this constitutional coup d’état and stop all police and military cooperation with the regime. Our translation of intro. Read the original article in French here: http://azls.blogspot.com/2014/10/burkina-faso-la-france-doit.html