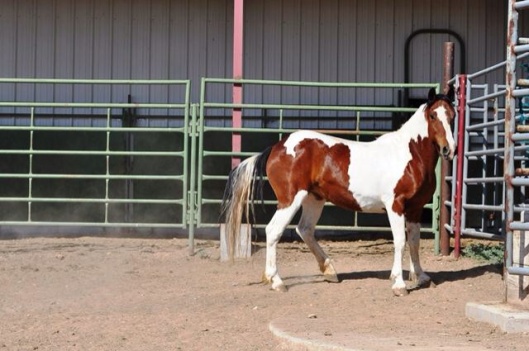 Pinto Wild Horse recently up for adoption, US BLM image

Last May the US Bureau of Land Management solicited “multiple short-term facilities accommodating a minimum of 200 wild horses and/or burros in a safe and humane condition.” One of the states listed is South Dakota. The US government actually pays people to keep the horses! And, they have “adoption” programs, for the wild horses. Some of these horses have met very sad ends, of late. They are supposed to be protected by the US government, since 1971, and yet some have disappeared, probably to be eaten by Europeans or Japanese. Only this month others have died mysteriously – possibly from stress. See: https://miningawareness.wordpress.com/2014/08/18/all-the-missing-horses-federal-govt-selling-wild-horses-to-western-dealer-linked-to-slaughter/ and “BLM Investigates Wild Horse Deaths at Kansas Corral” http://www.blm.gov/wo/st/en/info/newsroom/2014/august/NR_08_15_2014.html

Wild Horses Running Free in Wyoming – actually probably being chased by helicopters during mining prospection or for round-up and “adoption”. US BLM photo.

And, yet, 89 year old Dayton Hyde of the Black Hills Wild Horse Sanctuary in South Dakota takes no governmental monies and has provided safe refuge to wild horses for over 25 years.

But, “Now the dream of providing a Sanctuary for unadoptable wild horses, preserving the undomesticated land … may become a nightmare due to the attempt by certain companies to revive uranium mining in neighboring areas and even on the Sanctuary itself. Water is a precious commodity in this area” (From Dayton Hyde remarks to the NRC). 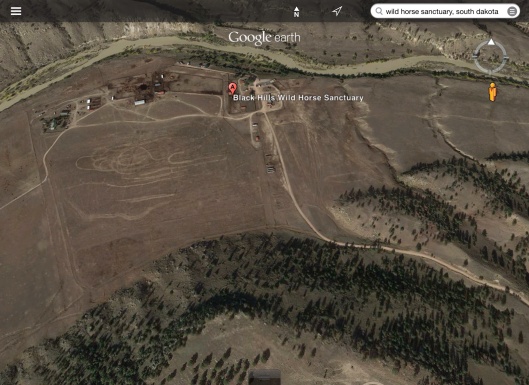 Part of the Black Hills Wild Horse Santuary by the Cheyenne River
Meanwhile, we must all sit on the edges of our seats and wait to see if the NRC judges will finally do the right thing, this week, and protect the water of the area and of the Black Hills Wild Horse Sanctuary against the uranium mining proposed by a Canadian based 6 cent Penny Stock company called Powertech Uranium (soon Azarga). Up until now the US government has forced the people to fight on against this mining company for over 7 years. 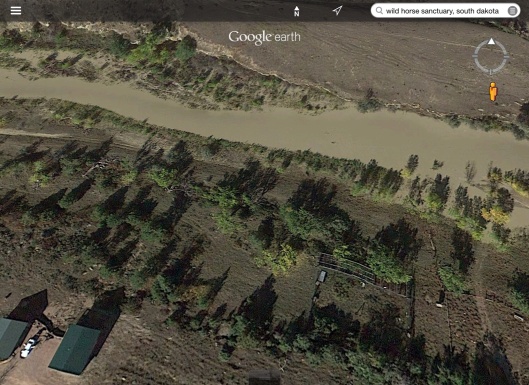 The US government has 88,605 wild horses and burros, which they are supposed to be caring for and protecting: Free-roaming there are at least 40,605 and in short-term corrals and pastures there are more than 48,000. They are all supposed to be protected by the US Bureau of Land Management under a 1971 law.

Now, this sounds like a lot of horses and burros until you consider that the US government through the BLM only “manages more than 245 million acres of public land, the most of any Federal agency“. The BLM “also administers 700 million acres of sub-surface mineral estate throughout the nation.” (Really this “public land” belongs to the American Indians, but that is another story for another day.)

How much room does a horse need? “If a horse is kept in a pasture, the amount of land needed for basic maintenance varies with climate, an animal needs more land for grazing in a dry climate than in a moist one. However, an average of between one and 3 acres (12,000 m2) of land per horse will provide adequate forage in much of the world, though feed may have to be supplemented in winter or during periods of drought.” http://en.wikipedia.org/wiki/Horse_care

So, it is clear that something is amiss. Something doesn’t add up! Certainly we don’t have to tell most readers what that something is! It is the competition of mining and cattle interests for these lands, and almost certainly oil and gas, as well. Mining guzzles a lot more water than a horse and most of these lands are semi-arid and arid, many under drought.

Over a quarter of a century ago, Dayton Hyde left his home in Oregon with the dream of finding a large acreage where he “could give freedom to captured wild horses“. Today the Institute of Range and American Mustang (IRAM), a 501c3 non-profit organization and its Black Hills Wild Horse Sanctuary is home to more than 600 wild horses, as well as other animals on 13,000 acres of private range in South Dakota – some owned and some leased from the Oglala Sioux Tribe, who are also opposing the uranium mining.

He elaborates: “Now the dream of providing a Sanctuary for unadoptable wild horses, preserving the undomesticated land and holding sacred the Native American Ceremonial Sites may become a nightmare due to the attempt by certain companies to revive uranium mining in neighboring areas and even on the Sanctuary itself. Water is a precious commodity in this area. Our eleven thousand acres” [now 13,000] “are watered by five wells and several miles of the Cheyenne River. Part of the Inyan Kara aquifer flows through the Sanctuary and beyond. The mining companies propose to drill a series of wells into the uranium deposits located in the underground aquifers, pump down thousands of gallons of water, and pump up uranium water to be processed for mineral content, then flush the resulting water back down into the wells. The land here is highly fractured and there is no way the mining companies can guarantee that the Inyan Kara, the Madison, and the other major aquifers will not become polluted and unusable to Man and animals. Our horses and cattle can sicken and die, along with the people. This whole area could become a cancer ridden death zone.”

“The Cheyenne River, which flows through the Wild Horse Sanctuary, is the primary water source for the wild horses, domestic horses, cattle and wildlife protected on our land…. If this water becomes contaminated, we will have no way to water the horses and the land will become useless as one of America’s greatest private wilderness areas and wild horse sanctuaries.” From Dayton Hyde’s affidavit to the NRC, in February of 2010 and comments on the SEIS submitted in December of 2012. (The Wild Horse Sanctuary apparently adopted (or gave birth) to more horses and rented more land for them, over the almost 3 years between testimony. They mostly separate male and female horses to minimize births.)

The Sanctuary is even home to rare and endangered Choctaw ponies! http://en.wikipedia.org/wiki/Choctaw_horse

Now, here comes the BLM asking for safe homes for Wild Horses, for which the US tax payer will pay, while Dayton Hyde has offered them safe homes with public donations and not with government funds. They mention the state of South Dakota, as a possible location. Yet, what is the US government doing to help protect the Wild Horse Sanctuary? Thus far, nothing. We wait to see if they will do the right thing this week!

Strangely, in this notice, the BLM does not offer to move the horses and burros to other greener states and pastures where people might be happy to have them to cut grass! Most of the states listed are arid, semi-arid, and/or under drought conditions (sometimes fracking induced or exacerbated drought!).

WASHINGTON, D.C. – As part of its responsibility to manage and protect wild horses and burros, including those removed from overpopulated herds roaming Western public rangelands, the Bureau of Land Management is soliciting bids for new, short-term holding facilities (corrals) located in 17 Western and Midwestern states.

Each short-term facility must be able to provide humane care for a one-year period, with a renewal option under BLM contract for four one-year extensions. The animals will remain in a short-term holding facility until they are adopted or can be transported to a long-term pasture. The solicitation is open until June 2, 2014.

The states under consideration for this solicitation are Arizona, California, Colorado, Idaho, Kansas, Montana, Nebraska, Nevada, New Mexico, North Dakota, Oklahoma, Oregon, South Dakota, Texas, Utah, Washington, and Wyoming. In the case of Oregon and Washington, the area west of the Cascade Mountain Range is excluded. A future solicitation will cover states in the East.

The BLM manages wild horses and burros as part of its overall multiple-use, sustained-yield mission. Under the authority of the 1971 Wild Free-Roaming Horses and Burros Act, the BLM manages and protects these living symbols of the Western spirit while ensuring that population levels are in balance with other public rangeland resources and uses. To make sure that healthy herds thrive on healthy rangelands, the BLM removes excess animals from the range to control the size of herds, which have virtually no predators and can double in population every four years. The free-roaming population of BLM-managed wild horses and burros is at least 40,605 (as of February 28, 2013), which exceeds by nearly 14,000 the number determined by the BLM to be the appropriate management level. Off the range, there are more than 48,000 wild horses and burros cared for in either short-term corrals or long-term pastures. All these animals, whether on or off the range, are protected by the BLM under the 1971 law.

The BLM manages more than 245 million acres of public land, the most of any Federal agency. This land, known as the National System of Public Lands, is primarily located in 12 Western states, including Alaska. The BLM also administers 700 million acres of sub-surface mineral estate throughout the nation. The BLM’s mission is to manage and conserve the public lands for the use and enjoyment of present and future generations under our mandate of multiple-use and sustained yield. In Fiscal Year 2013, the BLM generated $4.7 billion in receipts from public lands“. http://www.blm.gov/wo/st/en/info/newsroom/2014/May/BLM_Seeks_Bids_for_New__Short-Term_Facilities_to_Care_for_Wild_Horses_and_Burros_Removed_from_Western_Public_Rangelands.html

The fees which mining companies pay for US “public lands” are also derisory. And, they pay no royalties:
“Many of Nevada’s gold mines are located on public land, but the mining companies pay no royalties to the US government… Senator Russ Feingold (D-WI) said the no royalty program is a ‘rip-off and doesn’t make sense any more,’ and if it was changed, ‘could provide $300 to 400 million in revenue to the US government.“ http://en.wikipedia.org/wiki/Gold_mining_in_Nevada Nevada is where the majority of the Wild Horses live.

AND, SAY YOUR PRAYERS THIS WEEK THAT THE US NRC JUDGES DO THE RIGHT THING!
“…let justice roll down as waters, and righteousness as a mighty stream“. Amos 5:24 (ASV)
If not, we will opt for the KJV translation where “judgement” rolls down; but let’s be optimistic. Stranger things have happened than the NRC doing the right thing.