Map showing Dewey-Burdock property in red; ore body in yellow,
from “In Situ Uranium Project Baseline Sampling, Jan. 15, 2008“, submitted to the NRC: http://pbadupws.nrc.gov/docs/ML0808/ML080880461.pdf
Powertech or Powertech-Azarga, a Canadian Pennystock, worth 6 cents, continues to mystify. They are the ones currently proposing uranium mining in the area of the Black Hills of South Dakota, endangering water in an semi-arid environment, endangering the Black Hills Wild Horse Sanctuary, as well as Oglala Lakota cultural heritage, plus several endangered species. As may clearly be seen on the map it abuts the Black Hills National Park, home to Mt. Rushmore.

Powertech reported buying hydrogeological information deemed relevant to the US Nuclear Regulatory Commission hearings next week and have refused to share it, even though the three NRC judges clearly ruled on August 6th that they should:
“The ability to review the so called ‘additional quality data’ by the parties to this proceeding may affect the questions to be asked at the hearing, the date for the closing of the record on Contention 3, and the timing of the release of the Board’s decision on this issue. This data is relevant and would appear to provide support for, or opposition to, the application or proposed action. Therefore, the Board is reluctant to close the record in this proceeding without the expert witnesses for the parties having an opportunity to review this data. Instead, the Board is prepared to hold the record open until this data has been disclosed and reviewed by the parties. Powertech shall respond to this Order within 3 days, concerning when this data will be disclosed to the parties.” “UNITED STATES OF AMERICA NUCLEAR REGULATORY COMMISSION ATOMIC SAFETY AND LICENSING BOARD, Before Administrative Judges: William J. Froehlich, Chairman; Dr. Richard F. Cole; Dr. Mark O. Barnett, In the Matter of POWERTECH USA, INC.(Dewey-Burdock In Situ Uranium Recovery Facility) Docket No. 40-9075-MLA, ASLBP No. 10-898-02-MLA-BD01, August 6, 2014.” (Entire original document at bottom of post)

But, then suddenly on the 8th of August, Judge Froehlich issued what appears a waffling change of heart: “Regardless of the outcome following this legal briefing the Evidentiary Hearing scheduled to begin Tuesday, August 19 in Rapid City, SD will begin on time and will proceed on all the issues within each contention scheduled to be heard.” “US NRC, ASLB , POWERTECH USA, INC (Dewey-Burdock In Situ Uranium Recovery Facility), Docket No. 40-9075-MLA , ASLBP No. 10-898-02-MLA-BD01, August 8, 2014” (Entire original document at bottom of post)

What happened to contempt of court? It doesn’t apply for the NRC judges? “Contempt of court, often referred to simply as ‘contempt,’ is the offense of being disobedient to or disrespectful towards a court of law and its officers in the form of behavior that opposes or defies authority, justice, and dignity of the court.” http://en.wikipedia.org/wiki/Contempt_of_court

One must also wonder how it is that research undertaken by the TVA, Tennessee Valley Authority, a US governmental agency, is not public record and is allegedly in the hands of a private entity from which Powertech is supposedly purchasing it!

This is the second time that we’ve have seen this sudden waffling upon Powertech’s whining and complaining (having only examined two groups of documents!). Last time it happened several endangered species were jettisoned from the proceedings. However, they are still indirectly included as they depend on water for life! We even have a hypothesis, simply looking at the documents themselves (hypothesis which we withhold pending the ruling, however, but it’s sitting right there in the documents. S/he that hath eyes let them see! Look in the Blackfooted Ferret post: https://miningawareness.wordpress.com/2014/08/09/one-of-worlds-most-endangered-animals-at-risk-by-proposed-penny-stock-uranium-mining-will-it-be-saved/)

The only thing which IS clear is that the case of the opponents to the Dewey Burdock uranium mine is rock solid. Plus, they have been fighting this for a very long time and know what they are doing. So, if the judges rule against them something is clearly afoul.

“But let justice roll down as waters, and righteousness as a mighty stream”. (ASV), Amos 5: 24

This is not even the first time that Powertech has refused to disclose data! They have tried to avoid disclosing geological information in the past: “The data is also geological in nature and was acquired from proprietary drill hole logs.” The NRC staff ruled against this previous apparent attempt to hide information: “Accordingly, we have concluded that the information sought to be withheld from public disclosure does not meet the requirements of 10 CFR 2.390. Therefore, your request to withhold the information submitted in response to NRC staff RAI Clarifications for RAI-WR2(2), titled Attachment A of Response to RAI ER_WR-3, as described in your November 4, 2010 letter, from public disclosure is denied.“February 10, 2011 “NRC REJECTION OF POWERTECH (USA), INC.’S REQUEST FOR WITHHOLDING INFORMATION FROM PUBLIC DISCLOSURE FOR THE PROPOSED DEWEY-BURDOCK IN SITU RECOVERY FACILITY (TAC NO. J00830)”

Considering that we accidentally fell upon this previous case, while looking for the current case, there may well be other instances where Powertech has tried to sit on data-information, i.e. refused to disclose it.

Mysteries surrounding the upcoming hearing and additional Powertech mysteries, are raised below. Information regarding the judges in the case is also found below. Some things we’d like to know: How does a 6 cent penny stock keep fighting on for so long? Who is Alex Molyneux really? Does Molyneux still have any affiliation with Blumont? Did or does Powertech? Is Blumont still under investigation in Singapore? What is or was the relationship between Molyneux and Robert, aka “Toxic Bob”, Friedland? http://en.wikipedia.org/wiki/Robert_Friedland These questions are raised in some of the articles below, but mostly mysteries remain.

By a feisty blogger:
“@Powertech/Azarga Uranium: Shady Isn’t Bad Enough? Now You Have To Be Secretive?” Wednesday, August 13, 2014 http://theconstantcommoner.blogspot.com/2014/08/powertechazarga-uranium-shady-isnt-bad.html

“Powertech fights to withhold newly-acquired geological data from NRC, intervenors, and the public, Controversy erupts just days before critical licensing hearing“. Posted August 12, 2014
“In a bizarre turn of events less than two weeks before a critical evidentiary hearing held by the NRC’s Atomic Safety and Licensing Board, Powertech has been desperately trying to fend off an effort by the Oglala Sioux Tribe and the ‘Consolidated Intervenors’ to force the Canadian company to disclose newly-acquired geological data that could impact the NRC’s licensing of the proposed Dewey-Burdock uranium project. The ASLB recently ordered Powertech to disclose the data to the Tribe, the intervenors, and NRC staff, stating that the data is relevant to the Tribe’s contention that Powertech has not provided adequate information to demonstrate the ability to contain migration of mining fluids.” Entire article is here: http://www.powertechexposed.com/Powetech%20conceals%20data.htm

“Powertech shareholders approve reverse takeover by Australian and Singaporean investors” Posted July 20, 2014 Excerpts: “… The deal, misleadingly described by Powertech as the acquisition of British Virgin Islands firm Azarga Resources Limited, is actually a reverse takeover of Powertech by Australian businessmen Alex Molyneux and Curtis Church, and Singaporean investment firms Blumont Group Ltd. and Pacific Advisers Pte Ltd… The Powertech information circular also does not discuss a current wide-ranging and unprecedented investigation of Blumont by Singapore’s white-collar police unit and central bank following a 95% drop in Blumont’s stock price in October 2013. Singapore police have requested three and a half years’ of corporate electronic data from the firm, as well as data storage devices belonging to Executive Director James Hong and Executive Chairman Neo Kim Hock in their probe of possible breaches of the Singapore Securities and Futures Act. Also missing from the Powertech filing is any mention of Alex Molyneux’s role as a consultant and key advisor to Blumont’s board of directors, or his 2013 agreement, rescinded in April, to purchase 135 million shares of Blumont and become its Chairman.” Read the article here: http://www.powertechexposed.com/Powertech%20shareholders%20approve%20reverse%20takeover.htm

“Blumont emerges as winner in Azarga Resources’ reverse takeover bid for TSX-listed Powertech Uranium Corp” 28 Feb 2014 Blumont Press Release, found in NRC documentation: Excerpt: “From Blumont’s perspective, the management had the foresight to identify and participate in Azarga at an early stage, and is now leveraging on this investment to be part of a major global uranium play… are excited by the immense potential of Azarga’s and Powertech’s assets and the returns they can generate for Blumont in the long term.” http://pbadupws.nrc.gov/docs/ML1410/ML14105A348.pdf http://www.powertechexposed.com/2014.02.28%20Blumont%20emerges%20as%20winner%20in%20Azarga%20Resources’%20reverse.pdf

As we’ve mentioned already, http://www.powertechexposed.com is the place which is most consistently and thoroughly updating this case at the present time.

Of particular importance is this link to official documents related to the upcoming hearing: http://www.powertechexposed.com/ASLB%20Hearing%20File.htm

Judges Involved in this case:

From the NRC:
“William J. Froehlich

B.A., Harpur College, SUNY @ Binghamton (1972)
J.D., Brooklyn Law School (1975)
Judge Froehlich was appointed a full-time legal member of the Panel in March 2008. Previously, Judge Froehlich was a member of the senior executive service at the Federal Energy Regulatory Commission. He held a number of key leadership positions during his 32-year career at FERC, including Director of the Office of Administrative Litigation, Special Counsel to the Office of Enforcement, Assistant General Counsel for Gas and Oil Litigation and Director of the Financial Regulation Division. He oversaw the agency’s trial staff in the adjudication of natural gas, oil pipeline, and electric utility rate cases. He also handled cases involving the importation of liquefied natural gas, the rates and charges for newly constructed pipelines, and the prosecution of cases arising from the Enron trading schemes. He represented the agency and the United States in China and throughout Eastern Europe, where he has lectured foreign regulators and taught classes on administrative law, the privatization of state-owned industries, public utility ratemaking, and the development of independent regulatory structures. Judge Froehlich continues to teach at George Mason University, where he is an adjunct professor of administrative law.

B.S., University of Tennessee (1985)
M.S., University of Tennessee (1991)
Ph.D., University of North Carolina (1998)
Dr. Barnett is a licensed professional engineer, and was appointed to the Panel as a part-time technical judge in 2007. He is currently the Malcolm Pirnie Professor of environmental engineering in the Department of Civil Engineering at Auburn University. His research focuses on the fate and effect of metals and radionuclides in the environment, and he has authored approximately fifty peer-reviewed papers on the subject. He has over ten years engineering/applied science experience as a civilian contractor to the nuclear navy and at DOE facilities. He has experience with a wide range of nuclear-related issues, including enrichment, non-proliferation, low-level radioactive and mixed waste management, radiological controls/heath physics, risk assessments, site remediation, and subsurface radionuclide transport.

B.S.C.E., Drexel University (1959)
M.S.S.E., Massachusetts Institute of Technology (1961)
Ph.D., University of North Carolina (1968)
Dr. Cole has been a full-time member of the Panel since 1973. In addition to publishing numerous articles on water, wastewater treatment, and international training of environmental engineering, Dr. Cole has held teaching, administrative, and engineering positions in the United States and Guatemala with the University of North Carolina, Pennsylvania State University, and the state of Pennsylvania. He has held several leadership positions and committee assignments with numerous professional associations and is a diplomat of the American Academy of Environmental Engineers“. http://www.nrc.gov/about-nrc/organization/panel-members.html 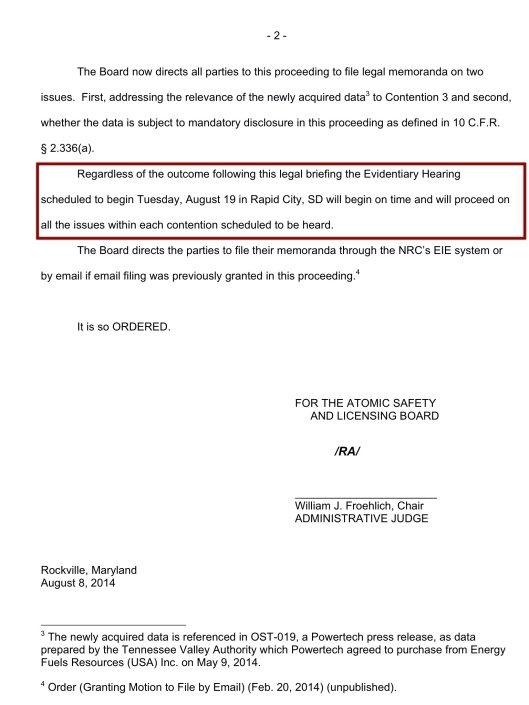