While from a military strategic perspective, bombing the Mitsubishi works in Nagasaki made sense, it seems clear that use of a Nuclear bomb was unnecessary. General Eisenhower, later US President, called it unnecessary: http://en.wikiquote.org/wiki/Dwight_D._Eisenhower Firebombings of cities were also terrible, but lacked the long-lived nature of the atomic bombs: Radioactive “black rain” from the Nagasaki bomb fell into the Nishiyama reservoir near the city and plutonium still remains.

“Ground view of Nagasaki before and after the bombing; 1,000 foot circles are shown. (Photo from U.S. National Archives, RG 77-MDH)” http://www2.gwu.edu/~nsarchiv/NSAEBB/NSAEBB162/

“Nagasaki was an industrial center and major port on the western coast of Kyushu… A small conventional raid on Nagasaki on August 1st had resulted in a partial evacuation of the city, especially of school children. There were still almost 200,000 people in the city below the bomb when it exploded. The hurriedly-targeted weapon ended up detonating almost exactly between two of the principal targets in the city, the Mitsubishi Steel and Arms Works to the south, and the Mitsubishi-Urakami Torpedo Works to the north. Had the bomb exploded farther south the residential and commercial heart of the city would have suffered much greater damage.” (emphasis added)

“Mitsubishi-Urakami Torpedo Works, 1,400 feet north of ground zero, Nagasaki. Torpedoes used in the attack on Pearl Harbor were built here.”
….
“Although the destruction at Nagasaki has generally received less worldwide attention than that at Hiroshima, it was extensive nonetheless. Almost everything up to half a mile from ground zero was completely destroyed, including even the earthquake-hardened concrete structures that had sometimes survived at comparable distances at Hiroshima. According to a Nagasaki Prefectural report ‘men and animals died almost instantly’ within 1 kilometer (0.62 miles) of the point of detonation. Almost all homes within a mile and a half were destroyed, and dry, combustible materials such as paper instantly burst into flames as far away as 10,000 feet from ground zero. Of the 52,000 homes in Nagasaki, 14,000 were destroyed and 5,400 more seriously damaged. Only 12 percent of the homes escaped unscathed. The official Manhattan Engineer District report on the attack termed the damage to the two Mitsubishi plants ‘spectacular.’ Despite the absence of a firestorm, numerous secondary fires erupted throughout the city. Fire-fighting efforts were hampered by water line breaks, and six weeks later the city was still suffering from a shortage of water. A U.S. Navy officer who visited the city in mid-September reported that, even over a month after the attack, ‘a smell of death and corruption pervades the place.’ As at Hiroshima, the psychological effects of the attack were … considerable.” http://www.osti.gov/manhattan-project-history/Events/1945/nagasaki.htm

“Of 7,500 Japanese employees who worked inside the Mitsubishi Munitions plant, including mobilized students and regular workers, 6,200 were killed. Some 17,000–22,000 others who worked in other war plants and factories in the city died as well. Casualty estimates for immediate deaths vary widely, ranging from 22,000 to 75,000. In the days and months following the explosion, more people died from bomb effects. Because of the presence of undocumented foreign workers, and a number of military personnel in transit, there are great discrepancies in the estimates of total deaths by the end of 1945; a range of 39,000 to 80,000 can be found…” http://en.wikipedia.org/wiki/Atomic_bombings_of_Hiroshima_and_Nagasaki#Nagasaki
(Emphasis added)

Recently one internet commentator has made a very big deal about the US bombing the Nagasaki Roman Catholic Church, at the time the largest in the east. Absent from the commentary was mention of the actual target of the bombing, which was Mitsubishi armaments manufacture. Absent that the torpedoes used at the bombing of Pearl Harbor were made in Nagasaki. While questioning how a largely Christian country might bomb a Christian church, the article fails to ask how such a Christian city, as Nagasaki, had such a large military industrial complex. No mention is made of Mitsubishi’s alleged use of forced labour-slavery. Absent, as well, was recognition that Americans of that generation still carried much baggage from the Protestant-Roman Catholic conflict in Europe, with its roots in the Spanish Inquisition (1478-1834) and the Reform, and where persecution cut both ways. Many American protestants in the 1940s would not have minded bombing a Roman Catholic Church, at all. Almost 20 years later, there was fear in protestant circles that election of J.F. Kennedy would give undue influence to the Vatican. Many churches were burnt in Germany by the Allies, as well, and in England by German Blitz bombings.

“Charles Church is the second most ancient Parish Church in Plymouth, Devon in England.” “During the nights of 21 and 22 March 1941, the church was entirely burned out by incendiary bombs. Although now a monument, the tradition of ministry at ‘Charles’ is not lost and is carried on by the Parish of Charles with St Matthias, one of its daughter churches, a quarter of a mile away to the north.” http://en.wikipedia.org/wiki/Charles_Church,_Plymouth,_Devon

While from a military strategic perspective, bombing the Mitsubishi works made sense, it seems clear that use of a Nuclear bomb was unnecessary. General Eisenhower, later US President, called it unnecessary: http://en.wikiquote.org/wiki/Dwight_D._Eisenhower Firebombings of cities was also terrible, but lacked the long-lived nature of the atomic bombs: Radioactive “black rain” from the Nagasaki bomb fell into the Nishiyama reservoir near the city and plutonium still remains. Plutonium 240 has a half-life of 6,563 years and Plutonium 239 has a half life of 24,100 years. While Europe has been rebuilt from fire bombings, plutonium and even shorter-lived radionuclides remain from the bombings in Japan. Contrary to what might be believed, the US knew very well the long-lived repercussions:
“Plutonium isotopes derived from Nagasaki atomic bomb in the sediment of Nishiyama reservoir at Nagasaki, Japan. Appl Radiat Isot. 2007 Apr;65(4):465-8, by Saito-Kokubu Y, Esaka F, Yasuda K, Magara M, Miyamoto Y, Sakurai S, Usuda S, Yamazaki H, Yoshikawa S, Nagaoka S., Abstract: The source of plutonium in sediments deposited at Nishiyama reservoir at Nagasaki was characterized by their (240)Pu/(239)Pu atom ratio. The average ratio was approximately 0.03, except in two layers. The main source of the plutonium was the Nagasaki atomic bomb. The plutonium continues to flow into the reservoir even now. The (240)Pu/(239)Pu atom ratios in two layers were higher than the average, which showed that plutonium in these layers were made of those of nuclear tests added to those of the atomic bomb.” http://www.ncbi.nlm.nih.gov/pubmed/17150366 (Emphasis added)

“You don’t know the horrible aspects of war… I’ve seen cities and homes in ashes. I’ve seen thousands of men lying on the ground, their dead faces looking up at the skies. I tell you, war is Hell!” http://en.wikiquote.org/wiki/William_Tecumseh_Sherman But, the hell of nuclear is eternal and will persist longer than humanity has existed.

Declassified US Document about Nagasaki, Sept. 14, 1945 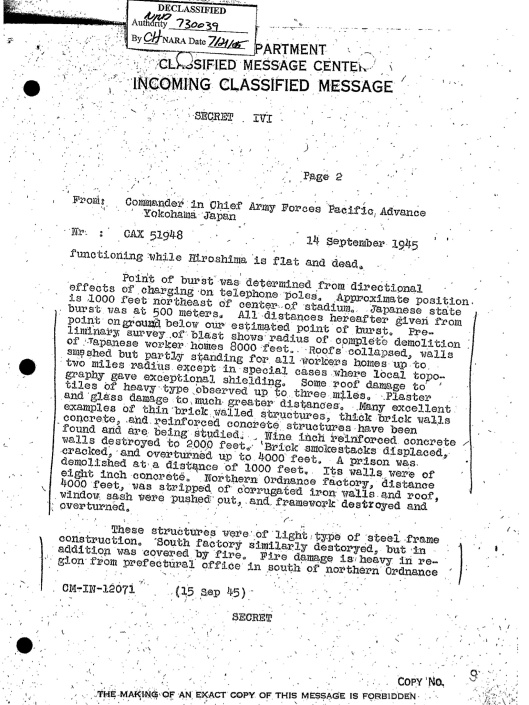 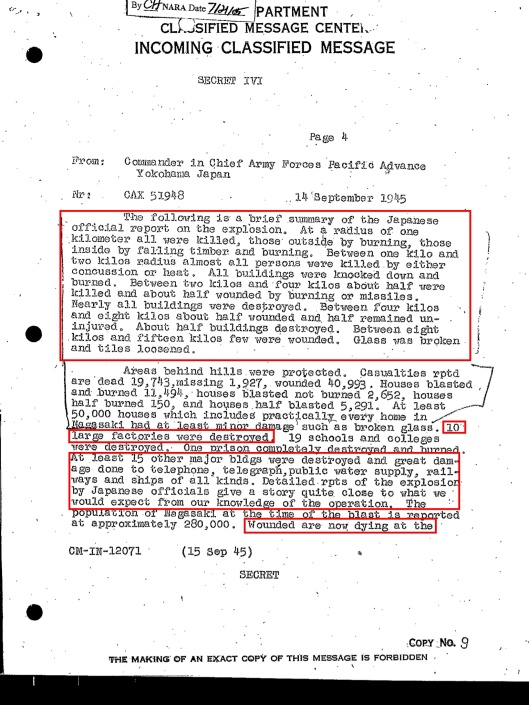