What is particularly frightening about the new study, by Kazuhiko Ochiai, et. al., 2014, which shows 38.5% to 56.1% decline in white blood cell count for Japanese monkeys exposed to radiation from the TEPCO Fukushima Daiichi nuclear accident is that the average amount of cesium in the muscles (i.e. meat) of the monkeys is mostly below acceptable radiation contamination “standards” for food in Europe (600 Bq/kg) and well below the “standard” for food in the US, Canada and Australia (1,200 Bq/kg US; 1,000 Bq/kg Canada and Australia). The average cesium in the monkey muscles ranges from 291.2 Bq/kg to 908.3 Bq/kg. In Japan the limit is 100 Bq/kg so that this amount of contamination would not be allowable in food in Japan. This amount of meat contamination would be allowable as food in the US, Canada and Australia, (if another type of meat). As mentioned in the article radiocesium is not the only radionuclide present in the monkeys, simply the only one, which they were able to test for. As the authors note, “the low hematological values in Fukushima monkeys could have therefore been due to the effect of other radioactive materials.”

The decline in white blood cell count impacts immunity of the monkeys. It suggests compromised immunity “potentially making individual animals and the entire troop susceptible to, for example, epidemic infectious disease“. These Old World Monkeys are very genetically kin to humans. After chimpanzees and other apes, they are the most similar to humans.

(Shimokita monkeys act as the “control group” for comparison)
There is also a decline in red blood cell count of 7% to 21.2%. Low red blood cell count means that there will be more difficulty transporting oxygen throughout the body and bodily tissues. Notably plutonium exposure has been associated with anemia. Low white cell count “can be associated with chemotherapy, radiation therapy, myelofibrosis and aplastic anemia (failure of white cell, red cell and platelet production).” http://en.wikipedia.org/wiki/Leukopenia

The Japanese monkeys, Macaca fuscata, a type of Old World Monkey, are believed to have diverged from humans about 25 million years ago. Radioactive iodine 129, whether routinely emitted by nuclear reactors or from the Fukushima Daiichi nuclear disaster, has a half-life of 15.7 million years and thus will be dangerous for over 251 million years. Plutonium 239, the most common type produced by nuclear reactors, half life 24,100 years will be dangerous for 385,000 years. Cesium 137, half-life 30 for 480 years. The Cesium 134 for over 32 years (half-life 2 years).

How is it then acceptable that long-lived radionuclides are legally emitted into the air and water by nuclear power stations, other nuclear facilities and nuclear waste dumps? If you find this unacceptable, here’s your chance to let the US EPA know: comment deadline is next Sunday, 3 August 2014: http://www.epa.gov/radiation/laws/190/ (Environmental Standards for Uranium Fuel Cycle Facilities: Advance Notice of Proposed Rulemaking (ANPR)
[Even if you miss the deadline write and complain anyway. It may help.] The EPA must also be told that cancer and non-cancer illness (morbidity) matter to both the individual and society and not just death (mortality). All must be counted. Tell them to stop playing games with numbers, such as alleging that more radiation to the thyroid (75 mrem; .75 mSv), is safer than less (25 mrem; .25 mSv), thus turning safety and radiology on its head. Both exceed the ICRP recommendation of 0.1 mSv for long-lived radionuclides which is already literal and metaphorical overkill – unnecessarily and dangerously high. 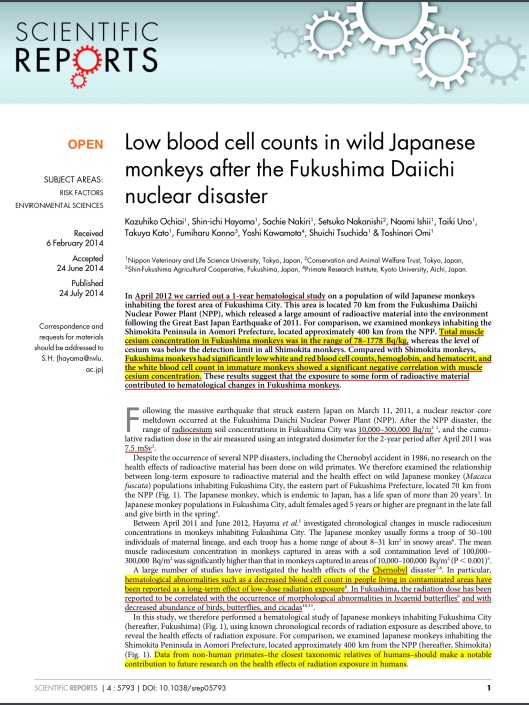 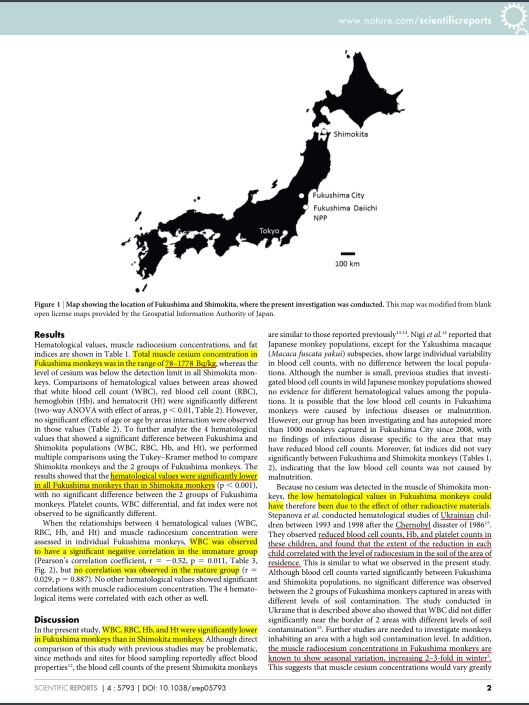 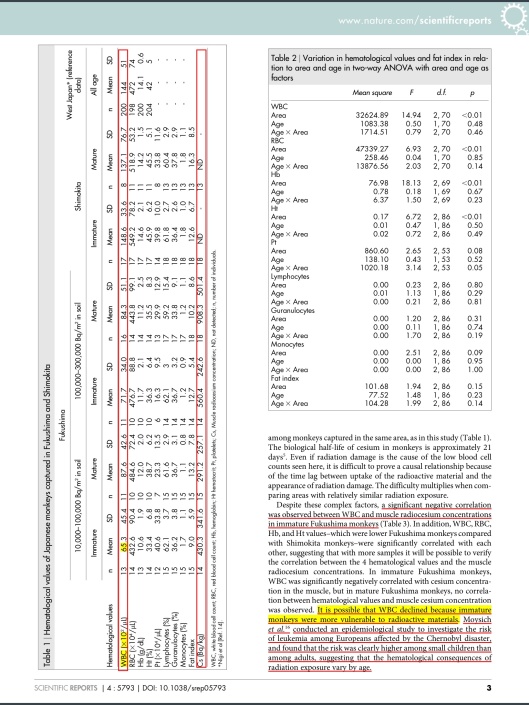 Highlights and Underline added by us. Original pdf is available for free to everyone here: http://www.nature.com/srep/2014/140724/srep05793/pdf/srep05793.pdf The authors apparently paid to make it free to all. Everyone needs to be grateful for both their research and for making it freely available. And, to the monkeys who died for the sins of the nuclear lobby. May they not have died in vain!

Notice that the monkeys were killed in this study. Because of the pig-headed stupidity of the nuclear lobby, these monkeys were sacrificed to prove that their muscles were indeed contaminated by radiocesium. It had to be proved to the idiotic lackeys of the nuclear lobby that any radiation in the monkey bananas was emphatically NOT from natural potassium, but rather would be from radioactive cesium taken up by bananas in the stead of natural potassium.

Potassium 40 makes up .00012 (0.012%) of the total amount of potassium found in nature and in everyone’s bodies. http://en.wikipedia.org/wiki/Potassium-40 Thus, it canNOT bioaccumulate in the body, but stays always at a steady-state. So, you canNOT become more radioactive by increased potassium intake. In fact, potassium-rich foods should be protective against contamination by radioactive cesium, since cesium mimics potassium in the body. They have found that when potassium is added to soil that cesium uptake by plants is decreased.

It’s apparently because of those like Ken Buessler of Woods Hole Oceanographic Institute (WHOI-MIT), who seemingly want people to believe that natural potassium is a problem rather than a solution, who seemingly want us to believe that bananas are bad for us, that these monkeys had to be sacrificed. Are you satisfied by the dead monkeys now Ken Buessler?

And, yet, no matter how many animals and people are sacrificed to prove again and again over the course of over 100 years that ionizing radiation is bad for us – the multi-generational mutagenic potential of x-rays was proved by Hermann Mueller in 1927- and the ability to cause cancer has been known longer – it clearly will never be enough for the nuclear lobby, until all life is dead on the planet.

“Three Monkeys Sat in a Coconut Tree, Discussing Things as They’re Said to Be, Said One to the Others, ‘Now Listen You Two’, There’s A Certain Rumor that Can’t Be True – That Man Descended From Our Noble Race, The Very Idea’s A Disgrace”

We prefer Mousseau and his team’s approach. They would have tested the blood and the environment and not killed the monkeys. Then, of course, there would be no definitive proof of levels of contamination. But, no matter how many die it will never be enough for the nuclear death lobby. The Japanese monkeys probably died more humanely than if left sickly anyway.

Almost 100 years ago, Hermann Muller, while at the University of Texas, Austin “demonstrated that radiation from X-rays would change the genetic makeup of fruit flies and that the mutations would be passed to subsequent generations…” Muller’s findings were published in Science in July 1927. “Altered Heredity of Flies By X-Ray’ was the headline in the New York Times… Muller realized the experiments showed that radiation posed threats beyond the laboratory… He spoke out about the dangers of radiation on people…” According to his granddaughter, Chandra Muller, professor of sociology at UT Austin, “He understood the dangers of radiation much sooner than most people did,… In our family, growing up, whenever we’d go to the dentist, my mother would get in a fight with the dentist. We couldn’t have the X-rays.” Read the article here: http://www.utexas.edu/know/2010/01/19/hermann_muller/
“Hermann Muller: A genetics pioneer“, By Tim Green; Jan. 19, 2010; Original run date: Sept. 28, 2007

Regarding chronic exposure- equilibrium of the radionuclides cesium and plutonium in the human body, the Lawrence Livermore National Nuclear Lab informs us: “In the case of a chronic exposure, organ and body burdens continue to build up over time until a steady state is reached where losses due to decay and excretion are balanced by intake and absorption. Cesium-137 has an effective half-life in an adult of about 110 days, and under chronic exposure conditions reaches a maximal dose contribution after about 2 years. By contrast, plutonium absorbed from the gastrointestinal or respiratory tract enters the blood stream and deposits in liver and bone with an effective half-life of 20 to 50 years. Only a small fraction of plutonium entering the blood stream is excreted in urine…” https://marshallislands.llnl.gov/glossary.php
(Emphasis added)

“Lower-than-normal numbers of RBCs may be due to:
Anemia
Bleeding
Bone marrow failure (for example, from radiation, toxins, or tumor)
Deficiency of a hormone called erythropoietin (caused by kidney disease)
RBC destruction (hemolysis) due to transfusion, blood vessel injury, or other cause
Leukemia
Malnutrition
Bone marrow cancer called multiple myeloma
Nutrition deficiencies of iron, copper, folic acid, vitamin B6, or vitamin B12
Overhydration
Pregnancy” http://www.nlm.nih.gov/medlineplus/ency/article/003644.htm

Low WBC may be due to:
“Bone marrow deficiency or failure (for example, due to infection, tumor, or abnormal scarring)
Cancer treating drugs, or other medicines (see list below)
Certain autoimmune disorders such as lupus
Disease of the liver or spleen
Radiation treatment for cancer
Certain viral illnesses, such as Mono
Cancers that damage the bone marrow
Very severe bacterial infections” http://www.nlm.nih.gov/medlineplus/ency/article/003643.htm

Japanese monkeys were the alleged inspiration for the supposed “Hundredth Monkey Effect“. http://en.wikipedia.org/wiki/Hundredth_monkey_effect
If false, it underlines even more clearly the importance of education, among monkeys and people, than if true. Spread the word – radiation is bad for Japanese monkeys and for you! Most governments are not protecting the people’s air, water or food, either. Levels of radiation in food higher than that found in meat from Fukushima contamination zones is unacceptable for public consumption. Using our air and water as radioactive sewers to save the nuclear industry money is unacceptable and the death to all life, over time. In the interim, who will care for the sick and dying?