This is the guy who decided to “consider accepting” High Level, HEU, nuclear waste from Germany:

He couldn’t keep this elderly Nun and her friends

from doing this to the highest security section, “Protected Area”, the HEU Manufacturing Facility, of the US Nuclear Y-12 facility: 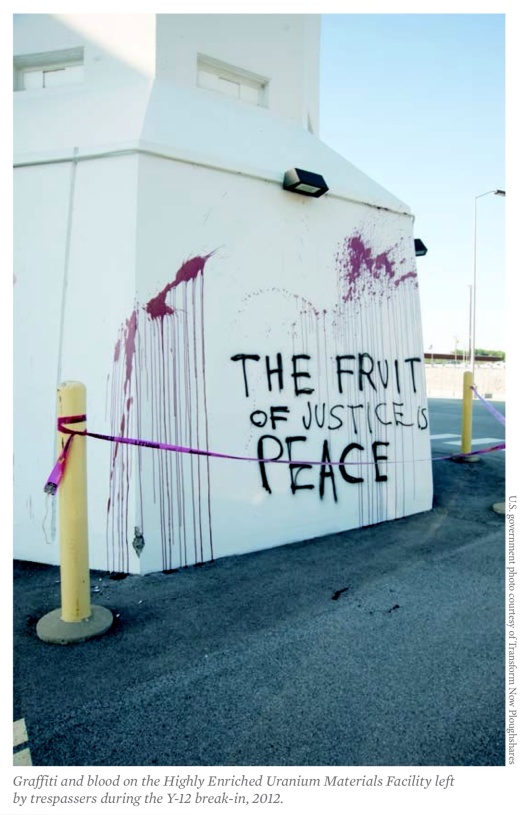 “In a February 2012 letter, the State Secretary of the Federal Ministry of Education and Research of the Federal Republic of Germany requested DOE’s Under Secretary for Nuclear Security to DOE consider accepting the fuel. The Office of Environmental Management responded on behalf of the Under Secretary that DOE would consider the request. Collaboration on the request was initiated in May 2012.” “Federal Register / Vol. 79, No. 107 / Wednesday, June 4, 2014 / Notices” pp. 32256, 32257. The evil German woman who made the request, and is pro-nuclear, was also forced to resign. But, yet everyone’s going to be stuck with their respective evilness and stupidity? How can you be pro-nuclear and yet want others to take your nuclear waste? This is pure evil. Can’t keep a nun out of the HEU facility and then want to transport HEU from Germany, across Northern Europe, the Atlantic and then most of South Carolina? Sheer stupidity.

It’s not too late to protest the shipping of German Nuclear Waste to the Savannah River Site, USA: Mr. Andrew Grainger, NEPA Compliance Officer, U.S. Department of Energy drew.grainger@srs.gov (Please write by Monday, 21 July if at all possible. (If you are late reading this, afterwards, may help, too).

“Under Secretary of Energy for Nuclear Security
Mr. Thomas Paul D’Agostino was sworn in on August 30, 2007, as the Under Secretary for Nuclear Security and Administrator of the National Nuclear Security Administration (NNSA). On September 3, 2009, President Obama announced that Mr. D’Agostino was his choice to continue serving as the Under Secretary for Nuclear Security and NNSA Administrator. The NNSA plays a critical role in ensuring the security of our Nation by maintaining the safety, security, and effectiveness of the U.S. nuclear weapons stockpile without nuclear testing; reducing the global danger from the proliferation of nuclear weapons and materials; providing the U.S. Navy with safe and effective nuclear propulsion; and providing the Nation with an effective nuclear counterterrorism and incident response capability. From February 2006 to August 2007, Mr. D’Agostino served as the Deputy Administrator for Defense Programs and directed the Stockpile Stewardship Program and major elements of the NNSA’s Nuclear Security Enterprise. The Nuclear Security Enterprise includes three national research laboratories, four production plants, and the Nevada Test Site. The Stockpile Stewardship Program employs more than 25,000 people around the country and encompasses operations associated with manufacturing, maintaining, refurbishing, and dismantling the nuclear weapons stockpile.   Prior to his appointments to the above Presidentially-appointed Senate confirmed positions, Mr. D’Agostino was the Assistant Deputy Administrator for Program Integration where he supported the Deputy Administrator and directed the formulation of the programs, plans, and budget for the Stockpile Stewardship Program. He had also served as the Deputy Director for the Nuclear Weapons Research, Development, and Simulation Program where he directed the formulation of the programs and budget for the research and development program that supports the Stockpile Stewardship Program. Mr. D’Agostino also worked in numerous assignments within the Federal Government including the start-up of the Department’s tritium production reactors and at the Naval Sea Systems Command as a program manager for the SEAWOLF submarine propulsion system.” http://cms.doe.gov/contributors/thomas-p-d-agostino (Emphasis Added)

“Thomas D’Agostino, NNSA Head, Stepping Down”
Reuters, Posted: 12/21/2012 9:08 pm EST, Updated: 12/22/2012 8:56 am EST
“* Decision unrelated to break-in at Y-12 site in July-official” http://www.huffingtonpost.com/2012/12/21/thomas-dagostino-nnsa-_n_2349500.html (Since Italian citizenship is by blood, and not by soil, D’Agostino can repatriate to Italy – assuming his ancestor came after ca 1851, and it’s pretty certain that he did – and leave those Americans who cannot repatriate sitting in his nuclear mess. It is unlikely that an incident with the waste transport will impact Italy – rather Northern Europe, the Atlantic, and the USA. His wife’s surname is indicative of an Italian of German heritage.)

“In July 2012, three antinuclear protestors, including an 82-year-old nun, entered Y-12’s “Protected Area”—the highest security section of the facility—and painted messages on the exterior of the HEUMF. Although they cut through fences and set off multiple alarms, the three were not immediately discovered. A DOE Inspector General’s investigation determined that several monitoring systems, including video cameras, were inactive during the break-in and that security forces took too long to respond and initially did not effectively control the situation. A high number of past false alarms was cited as one reason for the slow response. One security officer was fired, others disciplined, and additional security training was instituted for all employees as a result of the incident. Top officials at B&W Y-12 and the site’s security contractor, WSI-Oak Ridge, were also removed from their jobs, and the NNSA issued a “show cause” notice to B&W Y-12, giving the company 30 days to explain why its contract should not be revoked. In October, WSI-Oak Ridge was fired as security contractor; the NNSA had awarded the company a citation for high performance just one month before the break-in. The NNSA suspended nuclear weapons activities at Y-12 for two-and-a-half weeks following the incident and stated that it “raises important questions about the security of Category I nuclear materials across the DOE complex.” The NNSA said it would undertake a complex-wide review of security measures as part of its response. Several subsequent incidents, such as one in June 2013 in which guards let a lost driver into the site without checking identification, have continued to raise questions about the effectiveness of the NNSA’s response.” http://www.ucsusa.org/assets/documents/nwgs/nuclear-weapons-complex/y-12-complex-fact-sheet.pdf

“Transform Now Plowshares is an effort by people of faith to transform weapons into real, life-giving alternatives, to build true peace. Inspired by the prophets Micah and Isaiah, Jesus and Gandhi, Transform Now Plowshares began a symbolic conversion of the Y-12 Highly-Enriched Uranium Manufacturing Facility on July 28, 2012“. Support; Ask for them to be pardoned here: http://transformnowplowshares.wordpress.com

Historically, when European leaders willingly listened to the Abbesses St. Hilda of Whitby and St Hildegaard von Bingen, that part of the world was a much better place. If leaders today would listen to the late Hilda Murrell, and Sister Megan Rice, regarding nuclear power, nuclear weapons facilities, and contractor profiteering, the world would be a better, safer, place today. 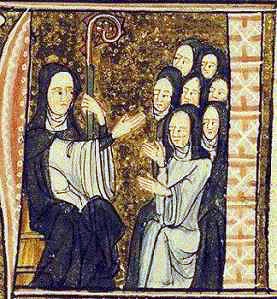 Excerpt from Sister Megan Rice’s statement before the U S Federal Court for the Eastern District of Tennessee, Knoxville, TN, on the 18th of February, 2004:
“This very document [hold up Exhibit 1] is self-incriminating evidence for all the world to see. It represents in microcosm an enormous cloud of deception, exaggerated expenditures in time, energy and cost under which Y-12 has hidden these 70 years since its inception. It reveals but a sample of the extortion by unaccounted for or unaccountable profiteering and blatant miscalculation over Y-12’s entire evolution till today. – Draconian extortion of the hard-earned labor of the people in this country over the last 70 years, and perhaps before.

It provides evidence why we are in deep trouble today. – A perfect analogy to what Greg spoke of as “Emperor’s new clothes.”

Why can we not call a spade a spade?

Why can we not admit the bare truth, and just get on with what is humanly possible: transforming this humanly constructed horrific monstrosity, an entity which has, effectively un-impeded, evolved into risks of perilous portent to the very existence of this sacred Planet and life as we have known it; for whose transformation we all readily long to give our lives.
….
It is indeed fitting as the issue here before us today has touched with perilous risk, for 70 years, the very existence of our sacred, lovely home, which we all share and try to treasure – our Planet Earth, which many of us revere as Mother! So thank you. We treasured the time all you gave in attending the trial in one way or another.

This trial has exposed, quite gratuitously, in the evidence, thanks to the prosecution’s witnesses, the truth about what is happening. That this one facility is part, of what Kristen Iversen says, the U.S. has become: one, huge, bomb factory, of which Y-12 is but one very significant part.

We are all grateful, as Anabel Dwyer points out, with the Defense team of Lawyers, that the details of the goings-on at Y-12 were revealed by the witnesses for the government, details kept mostly secret, over nigh to 70 years – the specific warheads being “enhanced” and “modernized” – the enormous quantities of highly enriched uranium material (HEUM) produced and stored there, in the very building we were able, almost unknowingly, to reach, to touch, and to label with statements and symbols of truth. This alerted Y-12 workers to what has been kept secret for nearly 70 years.

The secrecy began in 1943, when worker women, by thousands, could not tell fellow workers or family. Still now, secrets are kept between workers, officials, and managers. The secrecy prevailed to try relentlessly to turn these United States into a “super power,” an empire. As Germany tried to be under the Third Reich. When I was growing up, to our generation, these were very evil terms. Has any empire, or aspiring super-power not declined, not fallen apart from exceptionalism into decadence? So we had to come to this facility to call it to transformation. Thank you for revealing these secrets as evidence.” Emphasis our own. Entire statement and more here: http://transformnowplowshares.wordpress.com/2014/02/21/megan-rices-allocution/

Post-script update: Tom D’Agostino appears to now work for Fluor in a South Carolina office. This suggests that there may have been something in this deal for Fluor, who runs part of the Savannah River Site. In short, he sold out the USA, which is supposed to be his country, probably on behalf of Fluor. Our hunch has always been that they want the failed German Pebble Bed- Thorium technology and are trading it in for the waste. The German or US taxpayer will fund this, the US is stuck with the waste, and then they can pawn the failed technology off on an unsuspecting, absent-minded, public as great new German technology. As for the evil German woman, one of her appointed underlings apparently signed the official request for the US to take the waste – basically an administrative secretary who would have been retired at age 50 if he did not obey. More on this for another day.