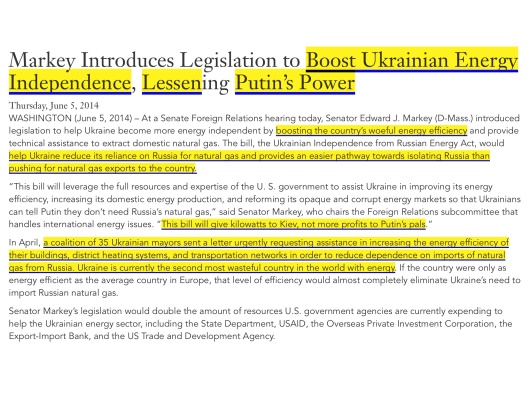 http://www.markey.senate.gov/news/press-releases/markey-introduces-legislation-to-boost-ukrainian-energy-independence-lessening-putins-power (Emphasis added)
Although this bill sounds wonderful on the surface, and energy efficiency is certainly important, a look at US Senator Markey’s video http://youtu.be/DVe7JwOGHE0 , and at the bill itself, http://www.markey.senate.gov/imo/media/doc/2014-06-05_UkraineBill_Energy_Markey.pdf shows too much emphasis on the use of natural gas, and too little on renewable energy. If the Ukraine is to use natural gas, it should indeed use its own, as proposed by Senator Markey, and import neither Russian, nor US natural gas. (Turkey will not allow liquified natural gas (LNG) to pass through the Bosphorus strait, according to the bill).

If the Ukraine is going to use natural gas, it should indeed upgrade its infrastructure, for safety’s sake, but this would be a slow process, ripe with the potential for corruption.

Rather, Greenpeace’s statement about the EU is correct, not only for the EU, but for the Ukraine, and for the World: “A clean energy system is Europe’s best bet for climate protection, energy independence, security of supply and affordable energy prices.” [1] By clean energy they mean renewable energy.

Greenpeace International’s Kumi Nadoo is correct not only for the EU, but also for the Ukraine: “In recent weeks, EU leaders have once again been scrambling to put emergency measures in place. But at next month’s EU Summit, … they have the opportunity to choose real independence and break the cycle of co-option and chaos. By choosing energy efficiency and renewables the EU can set its own course for now and forever. Replacing energy supplies from Russia with nuclear energy and fossil fuels from elsewhere, as has been suggested,…, is not the answer. The planned Southern Gas Corridor, for example, is initially expected to deliver only 10-20 billion cubic meters of gas per year, off-setting a mere 8% of Russian gas imports… Energy building insulation programmes, for example, could deliver major cuts in energy imports within months. Rooftop solar panels can be installed in a matter of weeks. In 2012 alone, Europe built enough new renewable energy installations to replace over 10% of Russian gas imports and power over eight million homes, generating a huge number of jobs in the process.” (Emphasis added) [2]

As Greenpeace EU energy policy adviser Tara Connolly recently observed: “Energy dependence drives dangerous climate change as much as it fuels conflicts.” The G7 “plan for energy security focuses on swapping Russian oil and gas for dirty and risky energy from elsewhere… Only a shift to an efficient energy system run fully on renewables can free our economies from the shackles of energy dependence and unlock a healthy and sustainable future“. (Emphasis our own)[3]

The solution is actually very clear and it is micro and even pico generation of energy from solar, wind, hydro, along with biofuels from food wastes. It is the only environmentally sound way and it is the only just way, for why should any country destroy its environment to send its resources to another country? Macro solar, wind, and hydro, while better than the alternatives, take up much more space, disrupt local environments, and are an eye sore.

However, just as the “powers that be” want renters-tenants, rather than homeowners, they do not want individuals (or countries) to have energy independence. Renters-tenants, and those who purchase energy, form a constant cash cow for corporations. They are not free, but enslaved to corporate interests. Only a homeowner off the grid, can be truly free, just as neither the Ukraine nor Europe will be free, as long as they are dependent on others for their energy. The Ukraine and the rest of the world need to choose freedom over slavery. Wool in the winter and light cotton in the summer, and a good pair of walking shoes is actually a very good start.

Most of Europe has such a mild climate and has little air conditioner, so it is hard to imagine why they are energy dependent, unless they have started overheating (as at least one country on the European continent has!). There are so many concrete (cement, beton) high-rise buildings that it is difficult to see how keeping warm could be a problem, as opposed to keeping cool. Looking below at who is expending energy in the Ukraine, gives us a hint. What we suspect for Europe is true for the Ukraine: It is not the people using most of the energy!

According to the IFC Ukraine is “among the world’s most energy intensive economies“. They state that the housing sector uses about one quarter (25%) of the electricity and 40% of heat energy resources in Ukraine. For housing at “least 80 percent of needed refurbishments are related either to energy saving or energy distribution.” [4]

In the Energy Charter’s 2013 “In-Depth Review of the Energy Efficiency Policy of UKRAINE, ‘Renewable Energy Policy “, it is observed that:
“The history of state ownership and central planning, the relative abundance of cheap coal and natural gas and the dominance of nuclear energy in the electricity sector go some way to explaining Ukraine’s low levels of renewable energy deployment.

In the electricity sector … nuclear energy contributed 45.5% to the electricity supply in 2012 and the contribution of conventional hydropower was 5.6%. The potential for wind and solar generated electricity in Ukraine is well recognised and the current feed-in tariff incentive is said to be generous and more than sufficient to stimulate activity although it suffers from administrative conundrums and legal uncertainties.

Others have pointed to the potential of biomass, citing the ubiquity of forest and agricultural wastes, which have the potential to be either directly fired to produce heat or fermented to produce gas of varying quality. The particular route advocated depends on the scale and circumstances surrounding the use of the output.
…
Artificially low energy prices have combined with other factors to create a situation where many energy users are caught in an affordability trap. Higher energy prices are affecting their ability to pay and the impact of these prices is amplified by excessive energy usage (real or nominal) resulting from the gross inefficiency of the supply and end-use systems. Thus the sourcing and application of funds to modernise and upgrade dilapidated energy infrastructure are a key priority in Ukraine’s energy policy…” (pp.13-14)
© Energy Charter Secretariat 2013 http://www.encharter.org/fileadmin/user_upload/Publications/Ukraine_EE_2013_ENG.pdf (Emphasis our own)

Note that Ukraine is a member of Energy Charter Conference:
“Article 19 of the Energy Charter Treaty requires all member countries to strive to minimize in an economically efficient manner harmful environmental impacts occurring from all operations along the entire energy chain. In doing so, member states shall ‘act in a cost-effective manner’, ‘strive to take precautionary measures’, and agree that, in principle, the “polluter pays” principle should apply.” (Emphasis added; see http://www.encharter.org)

The flag of the Ukraine “is a banner of two equally sized horizontal bands of blue and yellow colour, which symbolise the clear blue sky over yellow wheat field.” It was first used during the 1848 Spring of Nations and was first adopted as the official flag in 1918, by the short-lived Ukrainian People’s Republic. Under rule by Soviet Russia, “the flag was outlawed… People who were hoisting the blue-yellow flags in the Soviet Ukraine were prosecuted as criminals“. http://en.wikipedia.org/wiki/Flag_of_Ukraine

[1] “Commenting on the outcome of the summit, Greenpeace EU energy policy adviser Frederic Thoma said: ‘It looks like Putin has EU leaders on a short leash. By failing to move forward on energy policy, they have left the money taps open. Cash will continue to flow out of the European economy and into the pockets of oligarchs from Russia to Saudi Arabia until there is clear support for home-grown renewables and energy efficiency. A clean energy system is Europe’s best bet for climate protection, energy independence, security of supply and affordable energy prices.” (Excerpted from: http://www.greenpeace.org/eu-unit/en/News/2014/EU-summit-to-Russia-with-love-and-cash/ “EU summit: to Russia with love… and cash: Delaying climate and energy deal prolongs European dependence on imports“. Press release – March 21, 2014)

[2] http://www.greenpeace.org/international/en/news/Blogs/makingwaves/ending-european-energy-dependence/blog/49373/. “A win-win-win strategy for ending European energy dependence” Blogpost by Kumi Naidoo – May 26, 2014 at 15:30

[3] “G7: no breakthrough on energy independence
Press release – June 5, 2014 Brussels – A meeting of the G7 ends today in Brussels with no breakthrough on the burning issue of energy independence. The leaders of the world’s most industrialised nations were grappling with the effects of the Ukraine crisis on European security.
Commenting on the final G7 statement, Greenpeace EU energy policy adviser Tara Connolly said: ‘Energy dependence drives dangerous climate change as much as it fuels conflicts. G7 leaders might sound like they agree, but they’re bluffing. Their plan for energy security focuses on swapping Russian oil and gas for dirty and risky energy from elsewhere. Let’s not kid ourselves: timid steps by Obama and the EU to cut carbon emissions are not enough. Only a shift to an efficient energy system run fully on renewables can free our economies from the shackles of energy dependence and unlock a healthy and sustainable future.” http://www.greenpeace.org/eu-unit/en/News/2014/G7-no-breakthrough-on-energy-independence/ (Emphasis added)”