This disaster was brought to you by URS with Babcock & Wilcox, who are present at both the WIPP dump and at Los Alamos, from whence the waste is believed to have come. At WIPP a major subcontractor is French gov owned AREVA. U. Cal and Bechtel are also at Los Alamos. But, URS and Babcock & Wilcox are at both.

What a disaster! The images speak for themselves and on the perils of nuclear waste. There is already too much nuclear waste without adding more with nuclear power. All nuclear power must be stopped now and the existing waste carefully handled and closely monitored for forever.

“WIPP Update
May 23, 2014
Re-entry team continues investigation in Panel 7
Yesterday, the WIPP team entered Room 7 of Panel 7 to obtain additional video footage and photographs of the pack of drums that includes the breached drum that potentially contributed to the February 14 radiological release. Through photographic evidence, the team was able to confirm the drum identification number. The photos are currently being analyzed by the Department of Energy, contractor Nuclear Waste Partnership and the Accident Investigation Team. Photos obtained during the recent entry have been posted onto the WIPP recovery website at http://www.wipp.energy.gov/wipprecovery/photo_video.html&#8221; http://www.wipp.energy.gov/wipprecovery/recovery.html 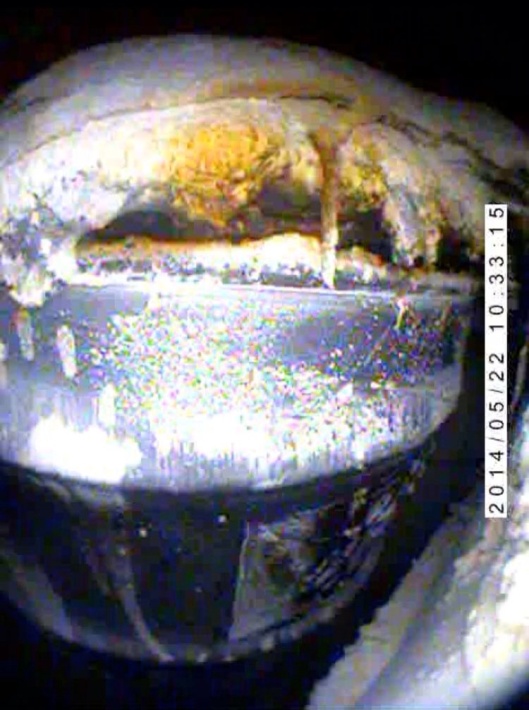 During the May 22 entry, this close up photo of the unsealed waste container was taken.

Heat damage is evident on this photo of a waste container.

A rope camera was used to inspect waste containers from between the columns.
http://www.wipp.energy.gov/wipprecovery/photo_video.html

An additional photo from 19 May visit, used in the slides for Thursday’s Public Hearing: