The latest idea that a change in Kitty litter could be part of the problem at WIPP reminded us of a post that we had started a few months ago.

Like outdoor cats, the policy of the nuclear industry, and their lackeys in government, for permanent nuclear waste disposal, is to dig a hole, dump waste, backfill and eventually abandon it. The US WIPP facility is typical in this regard. Six panels are full, backfilled and already removed from ventilation and the seventh is being filled.

Like WIPP, current proposals for long-term storage of nuclear waste, around the world, seem to involve eventual abandonment of the facility, making it a dump. This is true for every permanent waste dump that we have read about. Let’s call them what they are – dumps. It is true for the US, as well as proposed for France, and Switzerland. It has already caused problems in Germany. Even in Finland, where an excellent granite facility was built, they will backfill and eventually abandon it, so that ultimately it will flood due to waterfront location. With the possible exception of arid-desert climates, underground facilities leak and require some pumping of water. The US Yucca mountain appears of adequately solid rock for good facility construction and is in an appropriately arid climate, and yet the plan was still to backfill and eventually to abandon it. With closure, even arid Yucca mountain would have problems of corrosion due to humidity.

Multiple countries are proposing clay or salt permanent waste storage sites. With the exception of WIPP and Yucca Mountain, USA, the locations are not arid, but actually very wet. For a child it is a no-brainer that these are dumb ideas. But, many people seem to get more stupid with age and education. The projects are also based on intended collapse of the sites and a false hope that the clay and salt will somehow hold in the leaking radionuclides.

Two failing salt nuclear storage sites in Germany (Asse and Morsleben); a still growing sinkhole in Louisiana (Bayou Corne) caused by collapse of a storage cavern in a salt dome, show clearly the flaws of salt.

However, a child knows that salt dissolves upon contact with water. A child living in a coastal area knows that salt water corrodes. Crushed canisters, corrosion, and water all contribute to build-up of flammable and explosive gases in a closed facility.

A child knows that clay becomes soft and unstable when wet. And, that it shrinks and cracks when dry and expands when wet. Residents near the proposed French nuclear waste facility in Bure France have demonstrated that within 16 minutes the “argillite” clay (mudstone) proposed for storage dissolves into gravel clumps. This is because it is hard materials held together by soft materials. 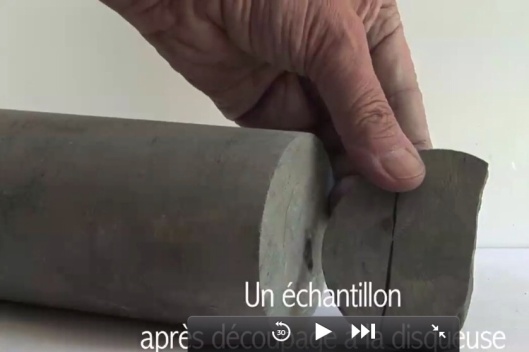 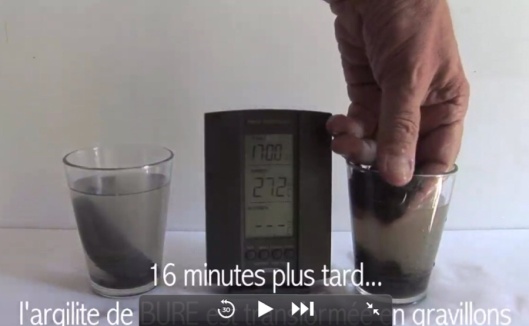 Images from video link at http://www.villesurterre.eu

Switzerland is also proposing a “self-sealing” opalinus clay, which they claim will seal in the nuclear waste. These are sometimes called mudstone or clay stone but they aren’t really stone. What is promoted as self-healing and self-sealing, whether clay or salt, is actually what will make keeping the facility tunnels open problematic. Facility collapse before or upon closure is also problematic and will lead to water intrusion, leaching of radionuclides, and probable explosions and possible fires. Nuclear waste must be sealed, monitored, ventilated and retrievable. None of this is possible in a collapsed facility. Self-sealing rock formations have constituted a major challenge for tunnel construction in Switzerland itself. And, a permanent waste facility is tunnels, after all.

In the UK and elsewhere, so-called low level radioactive waste, which really means diluted radioactive waste, is being dumped into public landfills, including by a school in Lillyhall, UK. Also, dumping is allowed into drains which go to sewers in the UK and US. There are supposed to be limits to the amount, but a) who is checking and b) many of the most dangerous radionuclides are cumulative in the body. It is the same type of con being run at Fukushima. Instead of filtering radioactive water, they dilute the same amount of radionuclides into a larger amount of water (or non-radioactive waste), so that it constitutes an allowable amount.

So, yes, many governments, hand and hand with the nuclear industry, are digging a hole, back-filling and abandoning waste, like cats.

However, cats don’t hide their killing. They proudly carry their dead prey to show their master. Not so for the nuclear industry and politicians who hypocritically hide and cover up waste and dead prey, lie to us all, while killing us silently, and not softly.

The Problems at WIPP Have Likely Only Just Begun

WIPP was opened in 1999. A 2006 US DOE document about WIPP estimates that
“the potential for a methane deflagration and consequent pressure buildup would not occur for at least 20 years after panel closure“. They note that “three possible mechanisms for gas generation by the TRU wastes are 1) Radiolysis; 2) Anoxic corrosion, the chemical reaction of the carbon steel waste containers with any brine that might be present to produce mainly hydrogen gas; and 3) Microbial reactions with some of the organic waste constituents (e.g., cellulose)“.(p.12) They “estimate that an explosive condition could develop in 20 years… Research has shown that even with the presence of sufficient water/brine, biogeneration of methane would not commence until at least seven years following panel closure“. (p.14) They state that “potential for a methane explosion is not projected to occur for at least 18 years (and most probably not for 30 years if at all)“.(p. 15) They speak of “the possibility that the wastes would generate enough hydrogen or methane to result in an explosive mixture in the repository“. (p. 4) Read the entire document here: http://www.epa. gov/radiation/docs/wipp/pecos/panelclosure_oct06.pdf

About Kitty and other Animal Latrines http://en.wikipedia.org/wiki/Animal_latrine