Endangered Wast Water or Wastwater is a lake located in Wasdale, a valley in the western part of the Lake District National Park, England. The lake is almost 3 miles long (4.6 km) and more than a third of a mile (600 m) wide. It is the deepest lake in England at 258 feet (79 m), and is owned by the National Trust. It is one of the finest examples of a glacially ‘over-deepened’ valley. http://en.wikipedia.org/wiki/Wast_Water 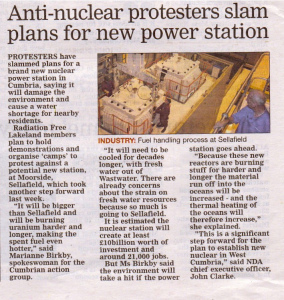 Article in Today’s Westmorland Gazette, not online so here it is…..No mention that the NDA/government is signing agreements with the same criminally irresponsible companies who designed and ran Fukushima.

Protestors have slammed plans for a brand new nuclear power station in Cumbria, saying it will damage the environment and cause a water shortage for nearby residents.

“It will be bigger than Sellafield and will be burning uranium harder and longer, making the spent fuel even hotter.” said Marianne Birkby spokeswoman for the Cumbrian action group.  “It will need to be cooled for decades longer, with fresh…