How much longer will the world ignore the warnings of this brave and honourable expert-professor regarding the risks of nuclear disaster in the context of earthquake hazard? Dr. Ishibashi warned of the dangers in 2003, served on a Japanese government subcommittee responsible for revising guidelines on the earthquake resistance of nuclear reactors, in 2006, and was ignored. He resigned in protest. The world could have been spared the Tepco-Fukushima disaster, had his warnings been heeded. (See his Wikipedia biography at the end of this post).

As Dr. Ishibashi warns us, this grave danger is not restricted to Japan. And, nuclear disaster in Japan impacts the entire world:

Emphasis added. A pdf copy of the original abstract is available here: http://historical.seismology.jp/ishibashi/opinion/0307IUGG_Genpatsu_Abstract.pdf and here: http://radio.rcdc.it/wp-content/uploads/terremoto_Abstract.pdf 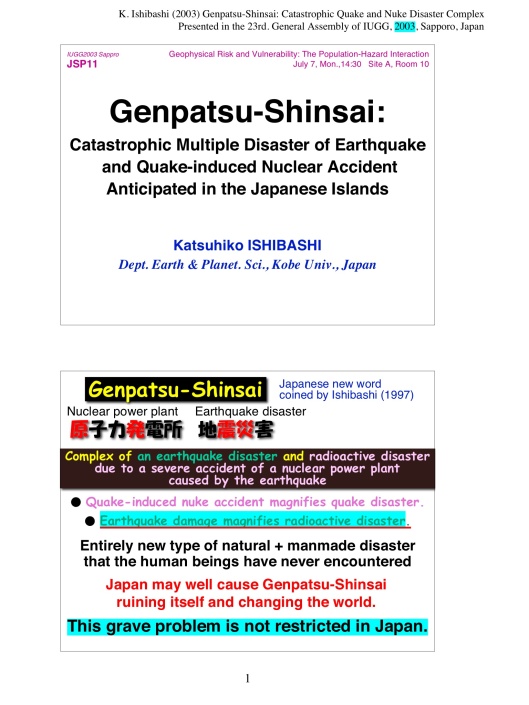 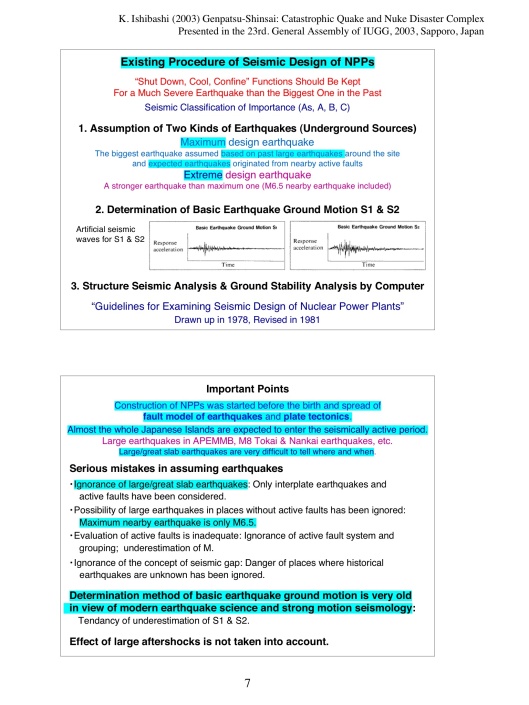 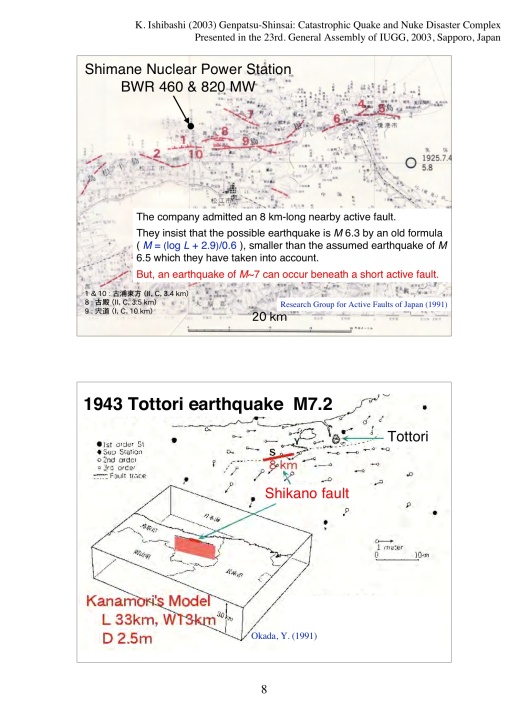 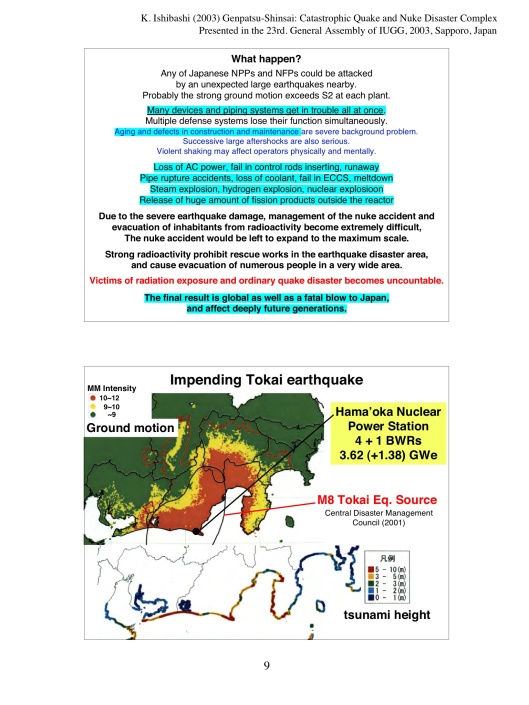 Pale blue emphasis and underlining added by us, to an already colourful original. A pdf copy of the original presentation may be found here: http://historical.seismology.jp/ishibashi/opinion/0307IUGG_slides.pdf

About the author, from Wikipedia (Emphasis Added):
“Katsuhiko Ishibashi (石橋 克彦 Ishibashi Katsuhiko, born August 8, 1944) is a professor in the Research Center for Urban Safety and Security in the Graduate School of Science at Kobe University, Japan and a seismologist who has written extensively in the areas of seismicity and seismotectonics in and around the Japanese Islands.[1] He recently coined the term genpatsu-shinsai (原発震災), from the Japanese words for “nuclear power” and “quake disaster”.[2][3]

Katsuhiko Ishibashi has said that Japan’s history of nuclear accidents stems from an overconfidence in plant engineering. He was a member of a 2006 Japanese government subcommittee charged with revising the national guidelines on the earthquake-resistance of nuclear power plants, published in 2007.[4] His proposal that the committee should review the standards for surveying active faults was rejected and, at the committee’s final meeting he resigned claiming that the review process was “unscientific“[4] and the outcome rigged[5][6] to suit the interests of the Japan Electric Association, which had 11 of its committee members on the 19-member government subcommittee[6] and that among other problems the guide was “seriously flawed” as a consequence because it underestimated the design basis earthquake ground motion.[7]

In May 2011, he said: “If Japan had faced up to the dangers earlier, we could have prevented Fukushima“.[8]