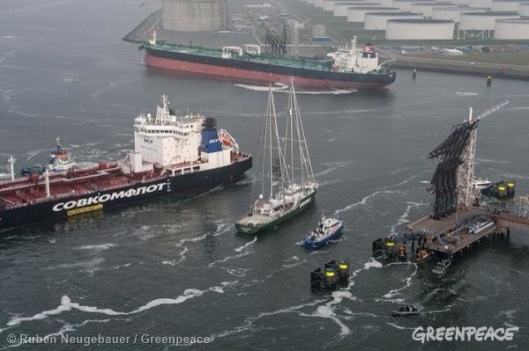 “The perilous space between an oil tanker and a harbour
Blogpost by Kumi Naidoo – May 1, 2014 at 23:00
This morning, one of the busiest harbours in the world was the backdrop for a citizen action to do what governments are seemingly unable or unwilling to; reject arctic oil drilling and stand up to the single-minded and ecologically harmful greed of corporate interests.

Buoyed by over five million Arctic Defenders, the Greenpeace activists put themselves between the oil tanker Mikhail Ulyanov – a 258-meter long monster whose wake stretches all the way back to the Prirazlomanaya oil platform – and the port.

The Ulyanov’s hold contains the first oil to be produced by the Gazprom-owned arctic drilling rig. A rig which I and Greenpeace know intimately. Not too long ago, seven of the activists arrested for today’s peaceful protest were the very same people who spent two months in a Russian prison for standing up to Gazprom in September of last year” Continue reading here: http://www.greenpeace.org/international/en/news/Blogs/makingwaves/first-arctic-oil/blog/49109/

Arctic drilling means that there will be more nuclear powered ice-breakers to leak in the Arctic:
“Leaking reactor coolant on Russian nuclear icebreaker sends it limping home for repairs, Published on May 5, 2011 by Bellona
The Russian nuclear-powered icebreaker Taymyr is returning to its home port after tiny cracks in the first cooling circuit of the ship’s reactor were found to be leaking large quantities of cooling water, sources told Bellona web.” Read the rest here: http://bellona.org/news/arctic/russian-nuclear-icebreakers-fleet/2011-05-leaking-reactor-coolant-on-russian-nuclear-icebreaker-sends-it-limping-home-for-repairs

Russia’s largest joint-stock company is Gazprom. The Russian state owns slightly over half (50.002 per cent), via Federal Agency for State Property Management, Rosneftegaz, Rosgazifikatsiya, giving it controlling shares in Gazprom. The Bank of New York Mellon acts as Depositary bank of OAO Gazprom’s ADR Program with 26.955%. As such, many major shareholders may be found on the Bank of New York Mellon web site.
See also: http://en.wikipedia.org/wiki/American_depositary_receipt